There’s no better way to enjoy the complicated and rich history of Russia than through a good tour. But dragging small kids from one ancient ruin to another restored church can become tedious, and children feel tortured instead of enlightened. Keeping that in mind, when we visited St. Petersburg and Moscow with our two boys, 9 and 11, we looked for companies that presented their cities in ways every member of a family could appreciate. Here are the ones that did it best. 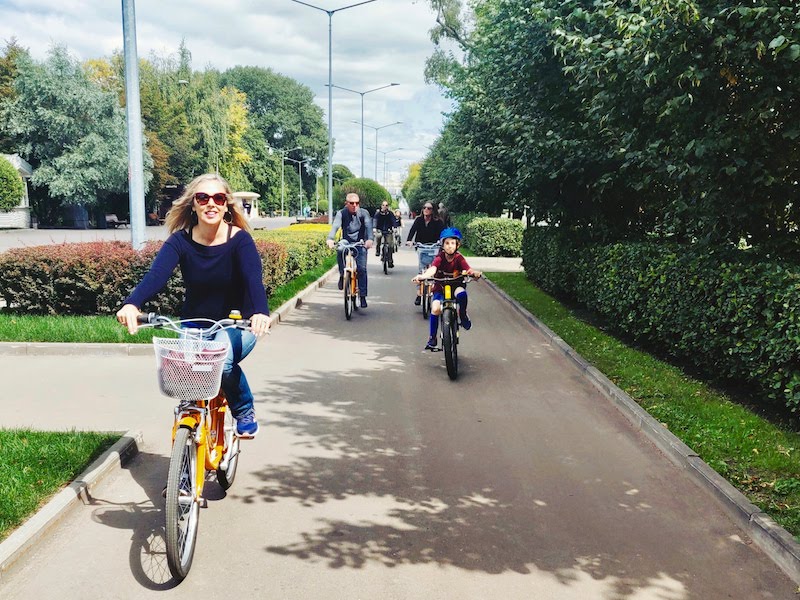 As soon as we got into the minivan that spirited us around St. Petersburg, our tour guide Maria, from Best Guides St. Petersburg, turned straight to the boys and confided she would reveal many secrets to them and there would be riddles and clues and they had to pay attention because she didn’t want them to miss anything. They stared at her, nodding solemnly, accepting the responsibility. It was the first time a tour started with the focus centered on them instead of us. Their little eyebrows furrowed in concentration as they listened to her many tales about the boyhood of Peter the Great, the Czar who would never sit, the Czar who won the port city from Sweden, and today again bore the name of his patron saint. Peter’s travels to Amsterdam inspired the 90 canals of St. Petersburg, and the European architecture he recreated reflected his admiration for the designs in Italy, France and Britain. It was their architects whom he hired to build his port city, Maria told us. We walked through Malaya Sadovaya street, a promenade with many interesting stories, one about the cats that saved St. Petersburg during World War II and how they still hold a place of honor, particularly in the Hermitage. Maria also gave clues so they could discover the hidden “key” to the city. Then, we went to Spit of the Basil Island, a section of the city with direct access to the water, where she taught them about the ships and they made their own origami fleet that they set sail into the sea. We walked the same walls on which guards stood watch atop Peter and Paul Fortress. She showed them a secret passage where treasure was sometimes buried and, luckily, my 9-year-old happened to find a box of “ancient” loot. Prison cells, where suspected revolutionaries awaited their fate, held an eerie fascination for us all, especially the furnished cells and ones with pictures of former prisoners affixed to the walls which once held them. Not for the uninspired, the 226 steps up the circular stairwell to the top of Russia’s largest church, St. Isaac’s Cathedral, offered a panoramic view, 142 feet above the city. Best Guides offers three family tours, but can also create a customized itinerary. Prices range $20–38 per hour depending on season and number of people and includes transport. 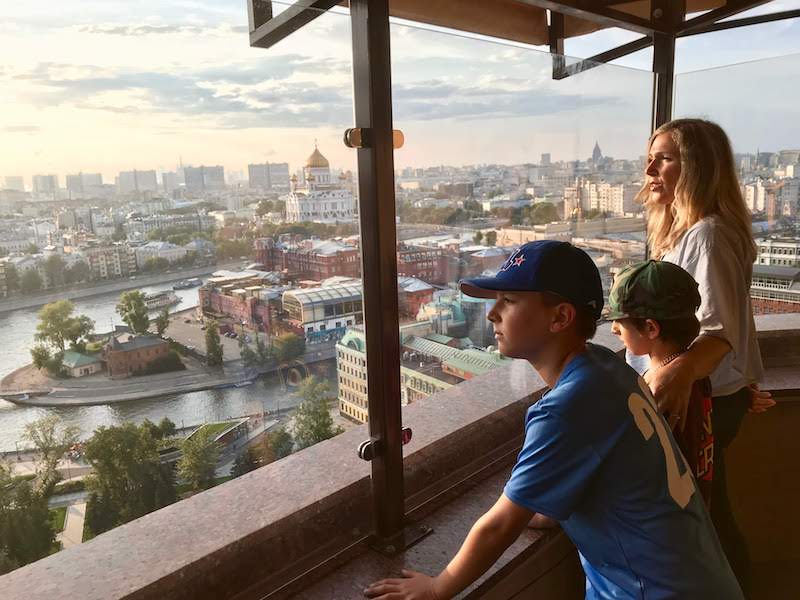 If you have kids visiting St. Petersburg, this will be the tour to which all others will be compared. After a brief, hands-on tutorial of our vehicles in a small courtyard, our two-hour tour with Segway Tours SPb began as Dennis whisked us around the city on sidewalks and through intersections, stopping at all the major sites. Even though at this point in our touring career, we had heard a bit about most of the major sites, there is always another way to present and a different way to hear. Coming from the top of a speeding segway, new information is not soon forgotten! We slid by the Bronze Horseman, a monolithic tribute by Catherine the Second to Peter the Great, guarding the Neva River with a myth that promises the preservation of the statue will ensure the survival of the city. In Palace Square, we marveled as we sped by the Winter Palace, where centuries of Russian monarchs lived before the revolution, and now housed one of the largest art collections in the world as part of the Hermitage museum. Because the boys perceived Dennis to be a cool guy, they gave him their full attention during the stops along our rides when he explained about the monuments. Speeding through the city this way, we covered more ground than we were able on walking tours and our feet didn’t ache at the end of the day. Both my boys said this was their favorite tour. Ever. 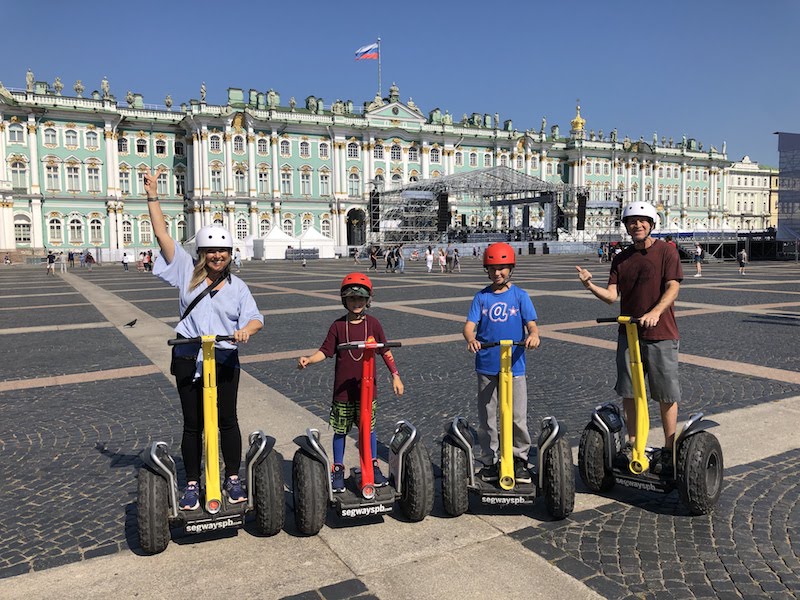 After the thrill of the segway in St. Petersburg, we tried to find something similar in Moscow. The closest we came was a bike tour. There weren’t many tours geared for young families in Moscow, so we felt lucky to have found this one. Vado, our tour guide from Moscow Bike Tours, was terrific. Again, he kept the energy high as we peddled around Moscow and grabbed the boy’s attention in a kind but firm way when they started to get a little feisty with each other. The great thing about touring with people who live in the city they’re sharing is they lived through the history themselves. Especially in Russia, history happens fast and depending on where you are when things change, your perspective of the events varies. Vado loves his city and took us through Gorky Park to show us how marvelous the city has restored the park of his boyhood after briefly falling into the disrespectable hands of the mob after Perestroyka, the movement which dismantled the Soviet Union. We rode above the Moscow River and held our breath as we passed the Ministry of Defense, which once housed the infamous KGB. We also cycled past the former home of Leo Tolstoy, where he lived across a former factory for 20 years with his wife and 13 children, eight of whom survived past childhood. This 2.5-hour tour is $45 per person and includes photos taken by your guide. 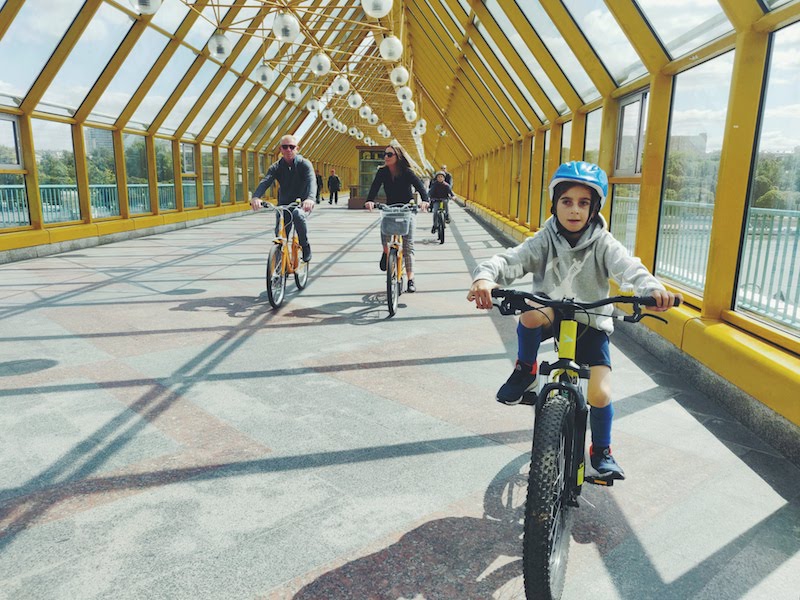