Escape to the Falkland Islands for the Ultimate Wildlife Adventure

There’s everywhere else, and then there’s the Falkland Islands. This almost treeless archipelago, sitting in the South Atlantic 300 miles from mainland South America, is a place like no other. Whichever way you arrive, your journey will be long, possibly rough and you will finally set foot in a wild, blustery place containing 3,000 people; 700,000 sheep; 1 million penguins; and 20,000 land mines.

The figure that will impact you most is the number of people. This is a territory approximately the size of Connecticut with the population of a village. As outsiders, you and your family will be noticed … and welcomed.

A recent boom in tourism has largely been stimulated by a dramatic rise in cruise ship arrivals during the southern summer (October to March). Visiting as part of a cruise provides a flavor of the islands, but you miss out on the immersive experience of staying in local accommodations and becoming part of the community.

By air, weekly flights arrive from Santiago (SCL), Chile, with LATAM. Once a month the flights route via Argentina in order to pick up the families of Argentinian soldiers who died on the islands during the Falklands War. The war continues to overshadow life here, not least in the form of all those land mines. The British Royal Air Force operates two flights a week from Brize Norton airbase near Oxford, England; civilians (including American citizens) can book seats through the Falkland Islands Government Office in London. The round-trip flight currently costs £2,222 (about $2,910) for adults and £1,111 (about $1,455) for children.

You will arrive first in Stanley, the capital, located on the eastern tip of the largest of the islands, East Falkland. This charming settlement of colorful tin-roofed houses boasts the Christ Church Cathedral, one of the territory’s few stone buildings. A distinctive arch made from whale bones stands in the churchyard.

An excellent museum housed in the historic dockyard provides an overview of Falklands history, lately dominated by the sovereignty dispute between Britain and Argentina. For Argentina, these are Islas Malvinas.

The dispute flared into war after Argentina invaded in 1982.

The museum includes many photographs and artifacts from that conflict which claimed the lives of 255 British soldiers, 649 Argentinians and three islanders. The Argentinian war cemetery lies in Darwin, 57 miles by gravel road from Stanley. Most of the British dead were returned to Britain, though there are a number of memorials in Stanley and the hinterland.

The recent human history is unavoidable, but for many visitors the big attraction remains the wildlife. In common with the Galápagos Islands, wild animals here respond in a remarkably relaxed way to people. For kids, the chance to interact with penguins proves a particular highlight. 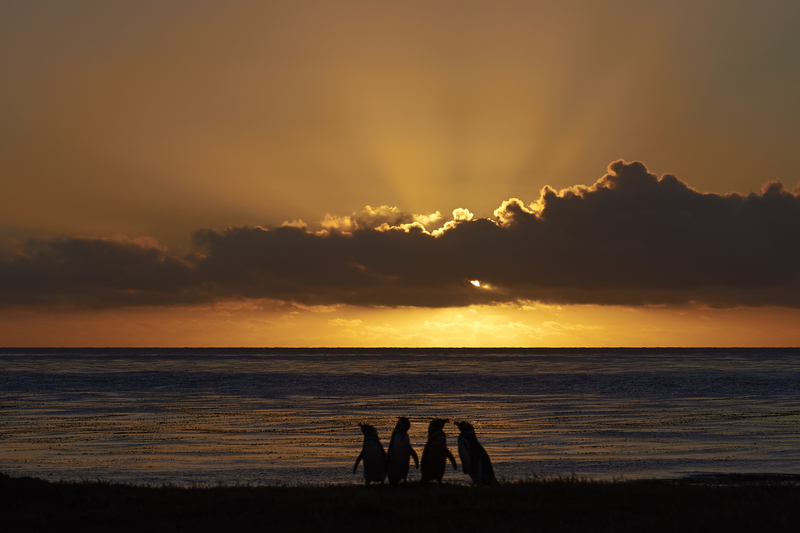 Take the family to one of the most popular wildlife sites, Bluff Cove, a 30-minute drive from Stanley. For Britons, the cove is synonymous with an air attack on British landing craft that claimed 59 lives during the Falklands War, though lately it achieved worldwide renown as one of the few accessible places in which it is possible to see five species of penguin: king, gentoo, Magellanic, rockhopper and macaroni. In addition, whales and dolphins often swim offshore, and sea lions and elephant seals also occasionally visit the beaches. Facilities at the cove include a tea room, a museum chronicling rural life on the islands and a souvenir shop.

Some wildlife sites, situated close to minefields left over from the war, are fenced and clearly marked. Penguins, not heavy enough to trigger the mines, often wander within the danger zones.

The archipelago comprises 778 islands, some of which can be reached by light aircraft operated by the Falklands Islands Government Air Service. Due to changeable weather conditions, schedules are confirmed a day in advance.

Carcass Island, off the west coast of West Falkland, provides one memorable excursion. The flight to the island, privately owned by the McGill family, takes 60–90 minutes, depending on stops along the way. Carcass (named after a ship, HMS Carcass, which visited in the 18th century) is especially noted for its Magellanic penguins as well as bird species such as the striated caracara and the ruddy-headed goose.

The island operates as a working farm (sheep and cattle), but tourism increasingly provides the dominant source of income.

Sea Lion Island, off the south coast of East Falkland, offers the best place to see marine mammals, where 95 percent of the archipelago’s elephant seal population resides, along with sea lions and, offshore, killer whales.

Although the Falklands feel remote, a sculpture trail in Stanley puts their remoteness in perspective. A 1:1 billion scale model of the solar system begins, on the waterfront, with a representation of the sun. As you head west, you periodically encounter other models of the planets, with distant Pluto located 3.6 miles away on the top of a hill called Mount Tumbledown (the location of one of the final battles of the war). It’s a full day’s hike to do the entire route. With the increasing intervals between planets, you come to realize the Falkland Islands are not so far away after all.