Hotels With History Around the World

WHEN YOU SWEEP THROUGH THE ENTRANCE portal of the Regina Isabella on the island of Ischia in your best linen trousers or with your flowing silk skirt lifting seductively in the warm Mediterranean breeze, you’re absolutely allowed to bask in the limelight and surrender to your most outrageous film fantasy. It’s almost obligatory, given the path across the lobby’s fabulous tiled stone floor requires you to follow, quite literally, in the footsteps of movie icons Elizabeth Taylor, Richard Burton, Sofia Lauren, Audrey Hepburn and Charlie Chaplin — all of whom adored this villa set into the Italian cliffs rimming the Tyrrhenian Sea. 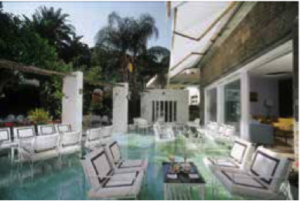 The stories contained in the spaces between the floors and roofs of hotels such as the Regina Isabella provide inspiration to legions of travelers who long to touch — or be touched by — grand and glamorous moments from the past. Historic hotels speak to us in whispers and creaks, in the details of their façades and the experiences of the travelers who came before us; each leaves his or her own mark, whether with a swirl across a ballroom floor or with a signature scrawled across the page of a guestbook.

Take, for instance, the d’Angleterre in Copenhagen, occupying an enviable location overlooking Nyhavn harbor and Kongens Nytorv, or King’s New Square. Established more than 260 years ago, it’s one of the world’s oldest purpose-built hotels. Lucas Johansson, d’Angleterre general manager, said the hotel’s corridors were designed wide enough to allow two ladies to pass each other gracefully in their dresses, while staircase landings allowed them an opportunity to catch their breath in corsets.

“Just imagine,” said Johansson, “the parties in the beautiful ballrooms when historical events — like the royal celebration of polar explorer Roald Amundsen’s discovery of the Northwest Passage in 1906 — took place. Arguably, every single person in Denmark has some sort of connection to the hotel. We take our job as custodians of such a legendary part of the Danish cultural society very seriously.”

Many hotels claim historical importance through a reputation for accommodating royalty, aristocrats and politicians of national or international standing, said Nathalie Seiler-Hayez, general manager, Beau-Rivage Palace in Lausanne, Switzerland; or by having played host to great events on the international stage. But, she said, there’s more to providing a memorable guest experience.

“I believe the first challenge in operating a historic hotel is not to disappoint the client’s expectations when visiting such a particular place,” said Seiler-Hayez. “Simply trading on past visits by great international figures may not be sufficient. They need to feel the authenticity of the place.”

A stay in a historic hotel may be as close as we ever come to time travel, communicating the essence of past love affairs and trysts, of political assignations and moments of espionage and intrigue. Fortunately, the world brims with glorious addresses that come fully marinated in their own still-evolving sagas. Some provided the setting for events that literally shaped the world, such as the agreement of 1912 negotiated at the Beau-Rivage Palace that ended the Italo-Turkish War and ratified the Italian takeover of Tripoli and Cyrenaica. The Conference of 1932, also held there, had global impact on war reparations and international disarmament at a crucial moment when Nazi power in Germany was on the rise.

Haim Shkedi, general manager,  King David Hotel in Jerusalem, admitted operating a historic hotel is not without additional challenges. And while King David Hotel’s roster of past guests includes the kings of Spain, Belgium and the Netherlands; the Crown Prince of Norway; the Prince of Wales; and the presidents of France, Germany, Italy, Bulgaria, Croatia and Argentina, Shkedi affirmed the hotel makes every guest feel valued through exceptional service and attention to detail.

“Guests of the King David Hotel expect all the amenities of a 5-star property, and we deliver on that promise,” says Shkedi. “That being said, ensuring the hotel maintains its historic identity while keeping up with modern hospitality trends can sometimes be a balancing act.”

At Hotel Adlon Kempinski Berlin, hotel manager Carsten Seubert agreed an additional layer of awareness comes along with operating a hotel that holds a place in history. He describes Hotel Adlon as one of the most intense workplaces imaginable within the hotel industry, with regular visits from VIPs and heads of state delegations and special events occurring on a daily basis.

According to Seubert, the biggest mission of the staff is to stay true to the property’s history and traditions and at the same time to stay relevant and to uphold a benchmark of luxury hospitality. To help maintain that focus, he finds it’s only necessary to glance around the entrance hall.

“A daily visual reminder of the rich history of the Hotel Adlon,” said Seubert, “is the centerpiece of our lobby — the famous elephant fountain, which was given to the Hotel Adlon as a present by the Maharaja of Patiala around 1930. In recent history, the visits of Barack Obama or Queen Elizabeth II were certainly extremely special and historic, and we are striving to create historic moments for our guests every day.”

Regardless of where travelers might set their compass, they’ll likely find a property fitting the criterion for a historic experience. In Turkey there’s the Çırağan Palace Kempinski, situated in a restored Ottoman palace upon the banks of the Bosporus. The Casa Monica Hotel in St. Augustine, Florida, visited by the king and queen of Spain, is reputed to be haunted. The 17th-century Château La Chenevière in Normandy, France, became the headquarters of high-ranking German officers during World War II, and the teakwood 137 Pillars House in Chiang Mai, Thailand, was constructed during the 1880s as part of the East Borneo Co. headquarters. 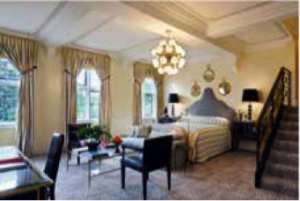 In London, which has no shortage of historic accommodations, The Milestone Hotel & Residences still manages to stand out. Elegant and welcoming, this authentic English mansion faces Kensington Gardens and dates to the 1880s. It was originally two private houses owned by a wealthy aristocratic family during a time when London’s traffic jams involved noses, tails and horse-drawn carriages.

“One of my personal favorite [spaces] is the Oratory,” said Andrew Pike, general manager, The Milestone Hotel & Residences. “[It was] the original private chapel of the building, which today we believe is London’s smallest licensed wedding venue. My other favorite is The Musician’s Gallery in the Tudor Suite, once the music room of the house where entertainers would play to the family assembled below.”

Whatever corner of the world beckons, you’ll find a hotel that can not only tell you a story but also provide you with a setting to add your own chapter. Among them are Hotel Hassler Roma in Rome, Schloss Elmau in the Bavarian Alps, Heckfield Place in England, Ashford Castle in Ireland, Baur au Lac in Zürich, Le Relais Bernard Loiseau in France, Inkaterra La Casona in Peru and the Britannia in Norway. Organizations such as Historic Hotels of Europe, Historic Hotels Worldwide and Historic Hotels of America offer comprehensive websites that help travelers locate celebrated properties and narrow down choices based on details including location and amenities.

If, by the way, you do ever find yourself heading to Regina Isabella in Ischia’s volcanic heart, it doesn’t really matter if you arrive by yacht, as did Jacqueline Kennedy and Aristotle Onassis, or aboard the ferry crossing the Gulf of Naples. The approach is merely the set-up, the opening scene that launches an experiential immersion in both history and legend. Just remember to dress for the occasion. You are, after all, adding your own lines to the hotel’s narrative, and you’ll want all eyes to turn your way as you make your grand entrance onto the terrace for cocktails.

Kids are back to school, which signifies the change of seasons is near. Get ahead of the game by planning your fall weekend getaway with the family around the Houston, Texas, area.

Niagara Parks Power Station offers visitors a unique, interactive experience. Located on the Canadian side of the Niagara River, the once-dormant power station features all-day attractions where visitors learn how the hydropower station used the power of Niagara Falls to generate electricity.

Although some people consider Virginia Beach a summer destination, it thrives in the fall as well. This autumn, Virginia Beach is pulling out all the stops to become a prime destination for the season. Check out the list of offerings.

Today marks a somber day in American history as we commemorate the 20th anniversary of the 9/11 attacks. We remember and honor the heroes who passed away, were injured and who risked everything to help on that September day in 2001.