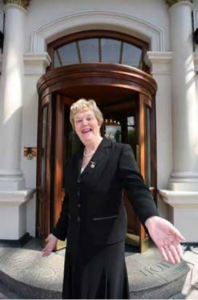 My husband’s search for his ancestors started with a virtual consultation with Helen Kelly, one of Ireland’s leading genealogists and the Genealogy Butler at Dublin’s nearly 200-year-old Shelbourne Hotel … and the only one in the world to hold that title. She helped set up a personalized research program and coached him on how to use publicly available online records. With Kelly’s assistance, my husband traced his Irish lineage back to the Great Potato Famine of the mid-1800s when his great-great-great-grandfather emigrated to the United States, where he fought in the Civil War before settling down to farm on the plains of eastern Colorado.

When it comes to beginning a journey into your ancestral past, Kelly suggests starting with the most recent known event and systematically working back in time. In my husband’s case, Ellis Island provided a good start, and Civil War records from the National Archives were enlightening. However, at some point it was time to fly to Ireland for some feet-on-the-ground research. We decided our pre-teen grand- children would benefit from this lesson in history and geography, so we brought them along. 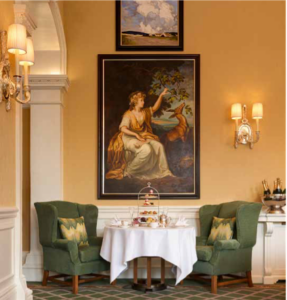 We met Kelly for afternoon tea in the elegant surroundings of the Lord Mayor’s Lounge in The Shelbourne Hotel (a warm and inviting jewel of a hotel built in 1824) overlooking St. Stephen’s Green. The grandkids and I sank into deep plush chairs, sipped tea with milk and consumed scones and smoked-salmon sandwiches from a four-tiered dessert stand while my husband chatted with Kelly, who tapped away at her laptop searching for birth, marriage and death certificates online.

“We are not only descended from our ancestors,” she said, “but greatly influenced by the landscape that cradled and nourished them.” She added rural Ireland has not really changed that much in the past 100 years, so it is entirely possible to “walk the same paths and lanes as our ancestors walked.” 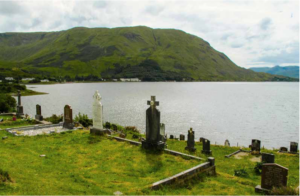 We rented a car in Dublin and drove four hours across the lush (so many shades of green!) landscape to a small village in Connemara on Ireland’s rugged west coast. There we found the graves of my husband’s ancestors in a postcard-pretty country churchyard. The church records revealed the ancestors’ “marryings and buryings” logged in round, precise, old-school penmanship. The most pleasant surprise of this visit was several people in town with my husband’s same last name — distant relatives, almost certainly — welcomed us into their homes and provided additional tidbits of information and ancient family gossip. When they weren’t speaking directly to us, they spoke Irish among themselves. We spoke only English, but over a pint or two (the kids were served bright-green milk shakes) at the local pub, we sang the same songs, including “Molly Malone,” “The Fields of Athenry” and, of course, “The Gypsy Rover.”

America is a nation of immigrants. Many people became interested in their own family’s backstory after watching (for 10 seasons, starting in 2010 on NBC and then on TLC) as various celebrities — from Sarah Jessica Parker to Spike Lee — discovered often surprising clues to their family tree on the Emmy-winning docuseries Who Do You Think You Are? Sue Hills, veteran producer and director on the BBC version of the series, founded Ancestral Footsteps with the goal of bringing tourists to their ancestral roots in much the same way as the celebrities on the award-winning show.

Where to start your research? Ancestry.com has more than 3 million subscribers and more than 15 million in its subsidiary AncestryDNA network, while 23andMe boasts 10 million subscribers. Both offer popular, direct-to-consumer personal DNA testing. Both require a saliva sample with which they analyze your DNA to determine your family’s origins. Each of them charges about $100 for the test. The analysis can also detect relationships with other subscribers based on a matchup of their and your samples. In addition, the analyses can provide wellness and health reports with information on cancer risks and health predispositions.

While a certain amount of heritage tourism occurs organically as families book travel to “the old country,” Ancestry partnered with Go Ahead Tours for guided travel to Ireland, Scotland, Italy and Germany. The tours include not only accommodations, food and sightseeing but also a pre-trip family history review and an Ancestry genealogist-guide who accompanies the trip. 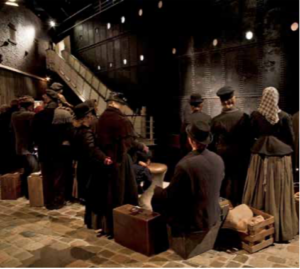 Many countries actively entice their various diasporas back to the homeland. Northern European countries remain the standard-bearers for this trend. Susan Rienitz from German Emigration Center in Bremerhaven said, “Bremerhaven was once the major immigration [sic] port. Between 1830 and 1973 more than 7.2 million Europeans left the continent via the Port of Bremerhaven.” The German Emigration Center, located on one of the harbors where the emigrant ships cast off, opened in 2005 and was awarded European Museum of the Year in 2007. The exhibits take visitors through the stages of emigration through authentic recreations of real biographies of people who once emigrated, so the journey really becomes personal and emotional. The stages include waiting at the quay, the crossing, the arrival at Ellis Island and a recreation of New York’s Grand Central Terminal. “For the millions of Americans with German heritage, this visit will give you goose bumps,” she said. At the end of the tour, visitors can embark on their personal search for friends and relatives in the ancestry.com and Bremerhaven/Bremen passenger lists available on site.

More than 70 million people worldwide and 33 million U.S. citizens identify as Irish. If you are one of those people, the Irish Government website provides a good starting point, offering records of births, baptisms, marriages and burials from nearly all the counties. The National Archives website contains early 20th-century census data, and rootsireland.ie has more than 20 million records from genealogy centers in all of Ireland. To begin the adventure, simply type in your surname. You also have the option to engage the Association of Professional Genealogists in Ireland to help.

If you’re traveling to Ireland, a stop at Epic Ireland in Dublin is a must. This high-tech, interactive experience tells more than 10 million authentic emigration stories. Epic Ireland also contains an Irish Family History Centre, operated by genealogical specialists Eneclann. They’ll not only find your ancestors but also connect you with living relatives. Getting to meet long-lost cousins in the land of your forefathers can be a real thrill. My Ireland Family Heritage and Irish Emigrant Trails offer personalized, family-friendly, heritage-focused trips.

“Genealogy travel from the U.S. is pretty big for Norway,” said Harald Hansen of Innovation Norway. Between 1860 and 1920, one-third of the Norwegian population left for America, and today 4.5 million people with Norwegian ancestry live in the United States — mostly in the Midwest (Iowa, Minnesota, North and South Dakota) and in California and Washington. A good place to start tracing your ancestry is the National Archives of Norway. Also connect with the Sons of Norway, an active U.S. organization catering to everything Norwegian.

You can choose from many other ancestry tours, all of them family-friendly. Founded by a family of Polish genealogists, U.S.-based Ancestral Attic offers family heritage tours to all of Poland and Eastern Europe. Polin Travel specializes in Jewish genealogical research, visits to Polish shtetls and tailor-made tours to Holocaust sites, including the Krakow ghetto, Auschwitz and Schindler’s factory. Henderson Travel Services, the oldest Black-owned travel agency, founded in 1955, organized travel for Dr. Martin Luther King, Jr. and offers customized heritage trips to Africa. To discover your roots in Asia, My China Roots offers a vast archive of records and operates trips that can take you to the village of your ancestors. Japan Deluxe Tours offers Nikkei Japanese Ancestry Tours to retrace your ancestors’ journey to America and an opportunity to overnight in your ancestral village.

Take your winter family travel to the next level with a trip to an exhilarating waterpark. Holiday car rental experts at StressFreeCarRental.com recently released a list of impressive parks filled with action-packed rides, relaxing lazy rivers and more.

Cities are filled with attractions and experiences for kids, making them prime destinations for family travel. A few tips can take the stress out of a city visit and make it a vacation for parents as well as kids.