The Carlsbad Caverns in New Mexico were formed from sulfuric acid erosion of underground limestone deposits. The caves, tucked into the Chihuahuan Desert, are recognized as a national park. Visitors can explore the Big Room cavern chamber, the Natural Entrance Trail, deep canyons and sea ledges. If you sign up for a guided tour you get to explore additional areas, including those only accessible with lanterns and ladders.

Known as Geology’s Hall of Fame, Luray Caverns, in Luray, Virginia, is the largest and most popular cavern in eastern America. The Caverns feature some of the country’s best folded stone formations made of translucent calcite. Make sure to check out the cave’s largest lake that gives an optical illusion, adding a mysterious quality to the formations hanging above. 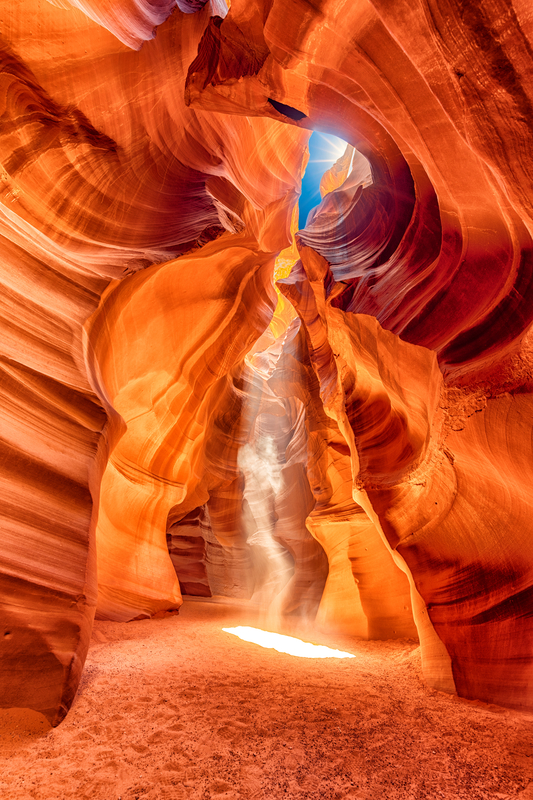 Part of the Navajo Nation in Page, Arizona, the slot canyon is split into two sections known as the Upper and Lower Antelope Canyon, known as “The Crack” and “The Corkscrew.” The cave was formed from sandstone erosion due to flash flooding, and still experiences a significant amount of flooding to this day.

Home to America’s largest underground lake, known as the Lost Sea, Craighead Caverns is located in Sweetwater, Tennessee. Start off with a guided walking tour of the caves while viewing a series of rare cave flowers and learn about the cave’s history and rock formations. After the walking tour, guests embark on a glass-bottomed boat tour of the Lost Sea.

This seven-layer limestone cave in Sullivan, Missouri, is a popular tourist attraction known for its colorful formations and underground lake. The cave is believed to have once been a hideout for Jesse James and his outlaw gang. Make sure to keep an eye out for the Wine Table, the world’s rarest cave structure, formed completely underwater. Along with exploring the cave, there are many other activities to engage in, so block off the whole day for a fun adventure.

Celebrate Love, Fun and Food in the Ozarks This Winter

Celebrate Love, Fun and Food in the Ozarks This Winter

The Virgin Limited Edition collection of properties came together to create a unique series of activities tailored for children. The new series will offer kids a taste of worldwide cultures and offer parents a respite with an educational and fun activity to break up the day.

Bicycling enthusiasts have something to look forward to in 2021 — a 750-mile path running through New York to the Canadian border is now open to the public. First announced in 2017, the Empire State Trail officially opened in December 2020.

The Urban Cowboy hospitality brand is no stranger to making city-adjacent stays feel a little more country. The newest addition to the roster, The Chalet, goes a rustic-chic step further at The Urban Cowboy property in the Catskills, New York.

Located in Pennsylvania, The Poconos is a primetime winter destination. Whether you enjoy skiing, snowboarding, tubing or are just looking for a relaxing weekend getaway, the Poconos may be the place for you.