The impressively restored, 19th-century oceanfront villa was the Count of Cabral Costa family’s retreat before it was transformed into the luxury boutique Farol Hotel. Located just outside the Historic Center, it’s next to the Lighthouse Museum and within a short walk or bike ride to the marina, the Citadel Art Center and Museum Condes de Castro Guimaraes. This proximity makes it ideal for families who want to leave the pool deck and explore from time to time.

As befitting a former prominent noble’s home, the entry gallery leads directly back toward the view of the Atlantic Ocean; rear doors open to the landscaped, seawater pool deck above a rocky cliff and the ocean. The remarkable blue, white and red lighthouse, called farol in Portuguese, looms large nearby.

The interior design is dramatic with touches of whimsy. The dark painted walls in the living room and bar sharply contrast with white-trimmed moldings, and a striking white arch frames the vista through an expansive glass window. In the lounge, recognizable celebrity faces including Marilyn Monroe, Audrey Hepburn and Cary Grant are screened onto chair backs. An animal print-painted piano and bold, brightly colored artwork add to the ambience.

Last year, when I finally had a chance to return to Cascais for more than a day tour, I took advantage of TAP Air Portugal’s stopover program; after a visit to Puglia, via Lisbon, I spent three nights at Farol Hotel. 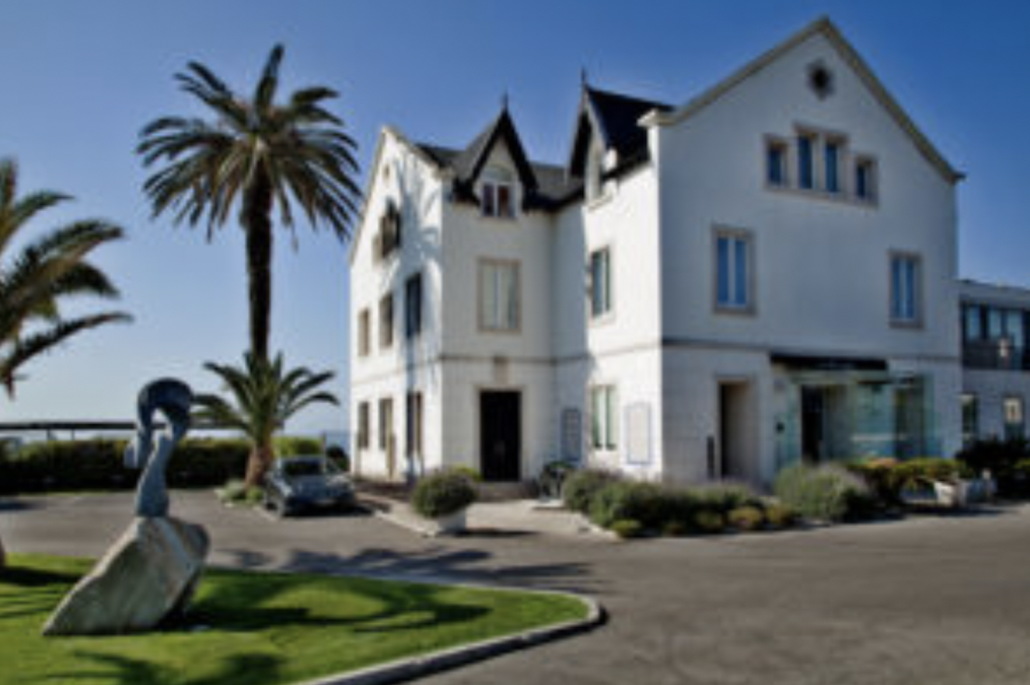 The 33-room, non-smoking hotel was bustling when I was there. I noticed a few families with school-age children, solo women, couples on a romantic retreat and some executives holding a board meeting at the hotel. My room, a corner suite with two walls of floor-to-ceiling views, was designed by Ana Salazar, one of eight Portuguese fashion designers who contributed to the décor in individual rooms. The picturesque panorama encompassed a cactus-bordered ravine below, the rocky cliffs, an expansive ocean and the winding, well-traveled bicycle path leading up the coast to Guincho, where the dramatic landscape leads to a spectacular surfing haven.

At Sushi Design, the sushi master prepared a meal that started with edamame and two appetizers — a lime-marinated sea bass ceviche and a tuna tartar. An over-the-top combination platter followed with an abundance of exquisite elements, including mixed sushi and sashimi, a tiger roll and braised niguiris and gunkas. I also dined at The Mix, the primary restaurant, where the multicourse tasting menu included a carpaccio of sea bass and monkfish rice topped with local baby clams and an enormous shrimp and lavender honey-tinged roasted duck breast. Desserts were artistically presented, but I remember the post-dessert best: chocolate-capped raspberries on skewers.

From check-in to check-out, the service was extraordinary and I felt like a pampered house guest. This seaside hotel is a fabulous home base for a family, even if one member needs to commute to meetings in Lisbon.