Island Hopping with the Family in Hawai’i

Home to jungled mountains, stunning beaches, exotic culture, lots of cool activities and even world-class infrastructure, Hawai’i poses a nagging question: How do you choose your favorite among the isles that comprise this magical chain? Luckily, you don’t have to — well-priced flights make hopping among islands quick and affordable.

Oahu may be Hawai’i’s most developed island, but it never lost sight of its Polynesian roots. Beautifully restored Iolani Palace, the only royal residence in the United States, and the Bishop Museum both tell the story of the Hawai’ian monarchy, overthrown in the 1890s.

A wave of Chinese, Japanese and Portuguese immigrants arrived on Oahu in the 1800s; explore their legacy in Honolulu, filled with block after block of authentic tastes, smells and experiences ranging from boisterous dim sum houses and shops selling the Portuguese doughnuts called malasadas to tiny storefronts packed with lei makers patiently stringing in silence.

If it’s Saturday, follow an early-morning climb to the top of Diamondhead with a breakfast of freshly made specialties like macadamia nut cake, pineapple bread pudding and fried rice studded with barbequed pork at the Kapi’olani Community College Farmer’s Market near the base of the mountain. 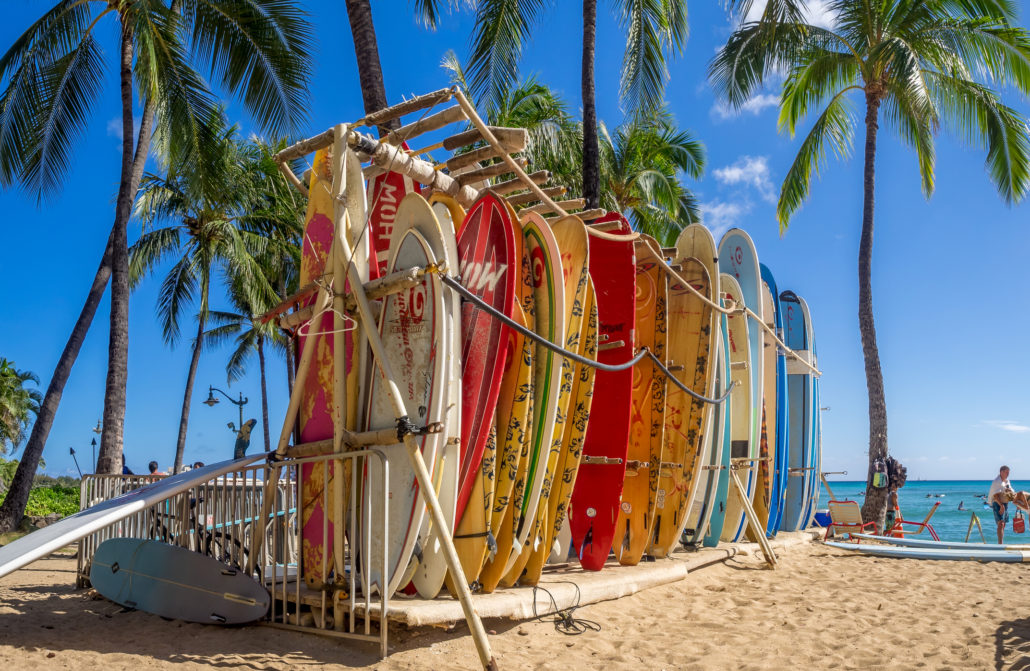 Lively Waikiki Beach made surfing famous, and its manageable waves make it a great place to learn the ancient sport of kings. Surf schools abound; the pros at Aloha Beach Services can get even the most balance-challenged novice up at least once. Farther afield, you’ll spot whales and world-class surfers among the massive waves along the funky North Shore; on the island’s east coast, rent kayaks at Kailua Beach and paddle to one of the crater-filled volcanic cays that stud the calm water, or ogle the mansions along adjacent Lanikai Beach. For an unforgettable encounter, let the marine biologists who run Wild Side Specialty Tours take you into the sea to snorkel with pods of curious wild dolphins.

When it’s time to get out of the sun, outdoorsy types can hop onto one of the easily accessible hiking trails that embroider the hilly jungle to spot dramatic waterfalls, wild banana plants and tropical flowers you thought only existed in the florist’s cooler. Shoppers will want to explore designer treasures at Ala Moana Center and the shops along Kalakaua Avenue.

Where Oahu bustles, Maui calms. Dotted with farms and villages like surf-centric Paia, the pastoral upcountry gives way to an array of beaches ranging from wide, sun-splashed strands to intimate coves. D.T. Fleming Beach Park offers easy access to a number of hiking trails; Ka’anapali Beach, with its soft sand, palm trees, calm water and views of Lanai in the distance, is a Hawai’ian beach of dreams. To snorkel with sea turtles, grab your gear and stroll along Ka’anapali to Black Rock Beach, where the shy swimmers gather to feast on the buffet of aquatic plants that flourish around the rocks. Along the Makena Coast, Wedding Beach offers a tiny pocket of paradise, reached through a doorway carved into an ancient stone wall. 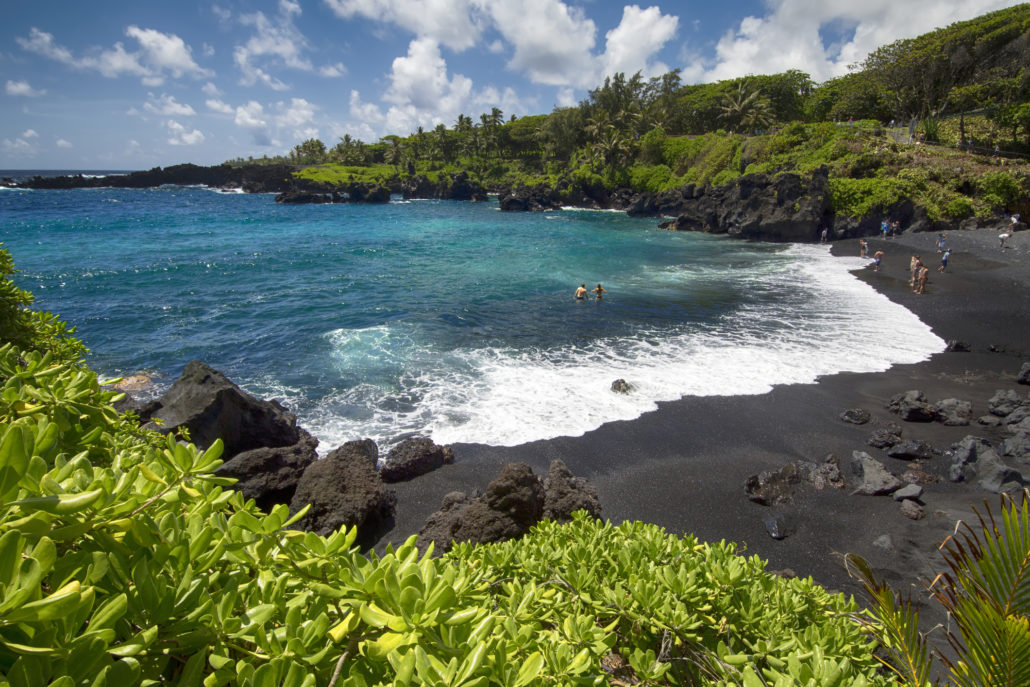 Rising more than 10,000 feet, Haleakala, Maui’s dormant volcano, sees the first and last light of each day on the island. There are a number of ways to take in the scene, including sunrise tours — excursions that end with a cycle ride down the mountain — and sunset outings with time on the summit for a laser-guided, telescopic exploration of the brilliant night sky.

Mention you’re visiting Maui to just about anyone and they’ll ask if you’ll be driving the Road to Hana, a 52-mile-long twisting roadway known as much for its 600 hairpin turns as it is for the remarkable sights — a black-sand beach, placid pools, roaring waterfalls and valley overlooks — it passes. Tell them, “Yes,” then visit Maui Roadsters, which rents reproduction 1957 Porsche Speedster convertibles, thus ensuring you’ll take those turns in style. Plan to take the day — you’ll want to dip your toes in the water, shoot dozens of photographs and grab a bite to eat in Hana or Paia.

Unlike Maui’s beauty, which unfolds at its own pace, Hawai’i Island is all about drama. Topping the list is Kīlauea Volcano, erupting with waves of fiery lava within Hawai’i Volcanoes National Park since 1983. Since the best time to see the lava flow is at night, consider taking a guided late-day hike or a boat tour, which gets you front- row seats to the spectacular show. Kīlauea’s liquid fire is just one aspect of the 505-square-mile park. The 11-mile crater-rim drive offers views into the smoking caldera; you can also walk through a lava tube and check out an underground volcano observatory.

Hawai’i Island is also home to Mauna Kea, which, at nearly 14,000 feet, is the state’s highest point. Long dormant, it’s now topped with telescopes and ranks among the best destinations in the world for checking out stars, planets, galaxies and other points of light in the velvet sky.

On an island filled with the most spectacular of sights, Waipio Valley still manages to stand out, thanks in part to the majestic waterfalls that plunge over volcanic cliffs, cascade down deep green ravines and tumble into placid pools, often from more than 1,000 feet. Although you can drive to a lookout, consider a tour, either by Jeep or horseback, which will let you get close to all that gorgeousness.

On Hawai’i Island, even the beaches have style — beyond Punalu’u, with its famous black sand, there’s also Papakolea, notable for green sand, and Hapuna, a classic turquoise and blue strand notable in its classic perfection.

If you only have time for one activity on Hawai’i Island, make it an open-door helicopter tour with Paradise Helicopters. You’ll see it all — the volcanoes, the beaches, the waterfalls and Waipio Valley — as the wind rushes in. 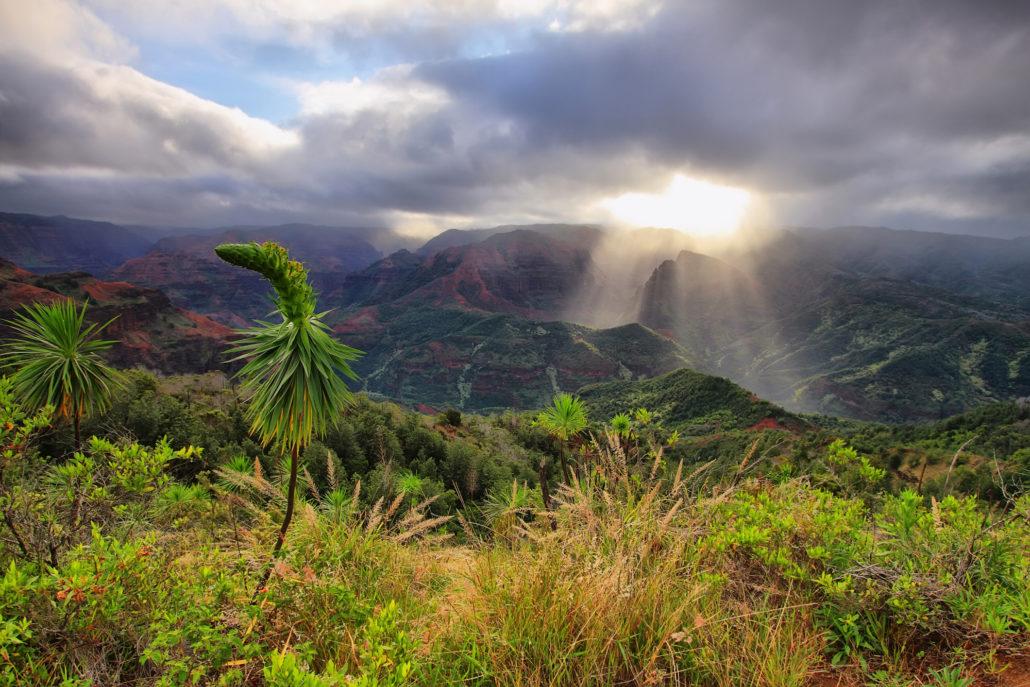 Less than a quarter the size of Hawai’i Island, Kauai also offers a surprising range of ecosystems and ways to experience them. Verdant green valleys, many strung with zip lines, spread for miles. To the west, the striated walls of Waimea Canyon reflect sunset shades of rose and gold as they plummet more than 3,300 feet. Radiating from Mount Wai’ale’ale, an extinct volcano and the wettest place on Earth, Hawai’i’s five navigable rivers rush toward the sea carrying canoers, kayakers and mountain tubers along for the ride. At the beach, water that ranges from bathtub calm to positively surly attracts splashers, swimmers, snorkelers and surfers. Even better, the island’s petite dimensions mean that after spending the morning in a state of adrenaline-fueled bliss, you can be on the beach by lunchtime, toes digging into the sand, mai tai in hand.

Many visitors stay in sunny Poipu, but Kauai’s North Shore offers a decidedly authentic experience. Hanalei, a laid-back beach town that, it’s said, is the mythical home of Puff the Magic Dragon, abounds with galleries, local coffee houses and surf shops. On Hanalei Bay, just a few blocks off the main drag, first-time surfers are pushed to the beach by gentle waves. If you’re lucky, you might spot Bette Midler or Pierce Brosnan strolling along the strand since both own beachfront homes on the bay. In typical Kauai fashion, everyone knows where the celebrities live, but no one really seems to care. It’s also where you can access the 11-mile-long Kalalau Trail, the only land access to the 3,000-foot-tall cliffs that comprise the legendary Na Pali coast. Take water, go early and be sure to have plenty of space on your camera. The views are astonishing.

Cruising is among the best ways to see a region’s highlights without the hassle of driving, foreign languages or changing hotels. But veteran cruise passengers often get a lot more value from their experience than first-time cruisers simply because they know the ropes.