Sip Your Way Through Bermuda With Gosling’s Rum

Love rum? Then you need to get to Bermuda, an island inextricably linked to one brand that flows freely.

It all started in 1806 when James Gosling left England bound for America. When his charter expired on day 91 of the voyage he docked at the nearest port — which turned out to be Bermuda. In 1824, he set up shop on the island, opening a store on Front Street that’s been there since and is instantly recognizable by its baby blue façade. 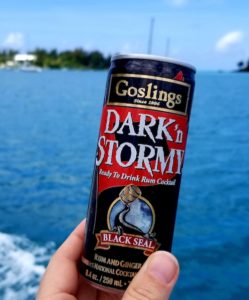 The family started selling rums in 1860; when they started using black sealing wax on bottles and customers started asking for “the black seal” rum, the company changed the spirit’s name. Today, Gosling’s produce white, gold and black rums as well as aged expressions, liqueurs, canned Dark ‘n Stormies, ginger beer and infused syrups. (Be sure to hit the store or the duty free shop at the airport to pick up some of the more unusual products you can’t get back home.)

You’ll see references to and drinks made with Gosling’s rums all over the island — especially noteworthy as the rum isn’t actually produced here, just blended. Nonetheless, it’s an integral part of Bermuda’s identity. Here are some places to get you started on a Gosling’s Rum crawl: 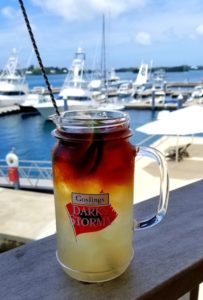 Dark ‘n Stormy at Marcus at Hamilton Princess. All photos by Kelly Magyarics

The Hamilton Princess (referred to as “The Pink Princess”) is an iconic property in the heart of the capital’s shops, restaurants and attractions. It’s on the water but doesn’t have a beach; however, a regularly running 20-minute jitney ride will take you to the private beach club which has lounge chairs and umbrellas, a restaurant and bar and activities including floats, stand-up paddle boards, kayaks and hammocks in the water.

What to drink: During Sunday brunch at Marcus order a pitcher of Dark ‘n Stormies served layered in a large mason glass; use the bar spoon to mix the spicy concoction of Gosling’s Dark Seal, ginger beer and lime, then share (or not.) At the beach club, have a Passion Mojito delivered to your chair, with Gosling’s Bermuda Light Rum, mint, lime and passion fruit.

Yours Truly is the island’s only true craft cocktail bar, a speakeasy experience with handcrafted libations made with house-made syrups, bitters and infused liqueurs and served over hand-carved ice. If nothing on the menu is striking your fancy, opt for the Dealer’s Choice where you bartender will shake or stir a customized sip based on your flavor preferences. 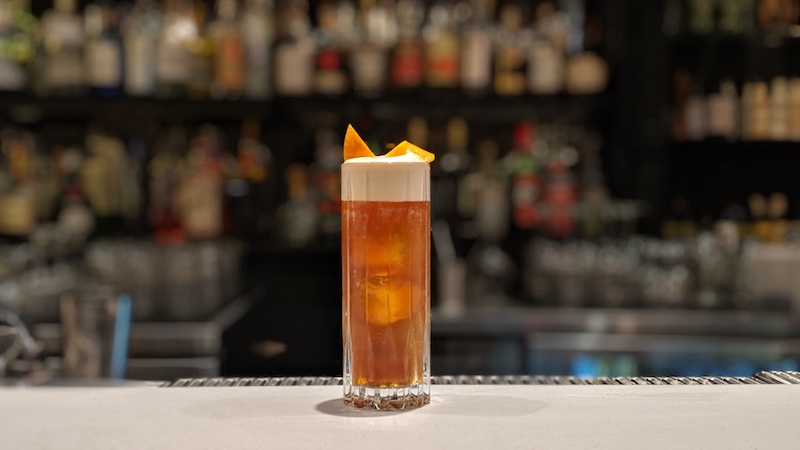 Nightcap at Yours Truly

What to drink: Head bartender Daniel Moik’s Nightcap is a riff on the Espresso and Tonic. He mixes Gosling’s Gold Seal Rum with cold brew coffee, maple syrup, orange zest and Angostura Bitters, topped with tonic and garnished with an orange peel. 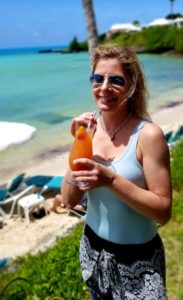 Cambridge Beaches Resort & Spa goes back a hundred years — it was the island’s first cottage colony and one of its oldest resorts. Many of the accommodations are named after repeat guests and long-serving staff members. (One guest holds the record at 100 visits.) It’s a perfect place to do some day drinking next to the fine-sand beach.

What to drink: The Rum Swizzle at Breezes mixes Gosling’s Black Seal Rum and Cockspur Rum with triple sec, Cherry Heering, falernum, Angostura Bitters and fruit juices, served in a hurricane glass and garnished with an orange slice and cherry. If you crave a little caffeinated pick me up, the Black & Coke mixes Gosling’s Black Seal Rum and Coca Cola. 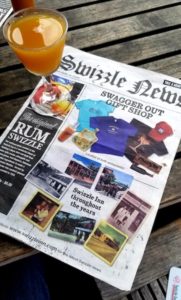 The Swizzle Inn,  arguably the most famous bar on the island, is where many visitors to Bermuda start or end their visit. Its close proximity to the airport — just a five-minute drive away — has made it an unofficial “airport bar” for those who want to delay leaving paradise a little longer and soften the blow with rum. Bermuda’s oldest pub, it’s rustic, kitschy and tacky — in the best way — with walls adorned with graffiti, business cards and dollar bills; first- and second-level patios; and pub fare from heaping nachos to hot wings to conch fritters. As the slogan goes, “Swizzle inn, swagger out.”

What to drink: There’s really only one option here. The Original Rum Swizzle was created in 1932 with a blend of Gosling’s Black Seal and Gold Seal rums, orange, pineapple and lemon juices, fruit liqueurs, falernum and a few other guarded ingredients. It’s available by the glass, half jug and jug and there is also a frozen version.