6 Things to Do, One Day in NOLA

Have you been to the Big Easy lately? If not, it’s time to plan your trip and add these can’t miss spots to your itinerary:

No visit to New Orleans is complete without starting the day at Brennan’s. No matter the hour or day you’ll be greeted by spiffy servers in ties and vests, tables will be topped with Cajun Bloody Marys or Brandy Milk Punch, and just about everyone orders dessert — for breakfast. Select a table in the pink-and-green dining room where frescos flank the walls, or out on the sunny courtyard where you can see the turtles peeking their heads out of the pond. Chef Slade Rushing blends classic NOLA and French flavors and techniques with modern ones, and though it’s really hard to decide, signatures include egg yolk carpaccio topped with grilled shrimp, crispy sweet potato straws and andouille vinaigrette, seafood filé gumbo with oysters and shrimp, turtle soup with sherry and Eggs Sardou (its take breads and fries the artichoke hearts before piling on Parmesan creamed spinach, poached eggs and choron sauce.) And not one, but two, tableside desserts were invented here. Get your phones at the ready as your server cooks bananas in brown sugar, butter, rum and banana liqueur, flambés it all and then spoons it over vanilla ice cream. Crêpes Fitzgerald (named as an homage to a regular guest decades ago) is also flambéed and varies a bit with the season; in summertime, lemon cream cheese-filled crêpes are tossed with butter, sugar and local Pontchartrain strawberries.

Afterward, head up the street to the the just-opened The Historic New Orleans Collection, part museum, research center and café. Located in the heart of the French Quarter, it’s the only place where you’ll find a definite permanent collection about the history of the French Quarter through curated artifacts, photographs, exhibits, digital archives and more. Stroll through the two buildings yourself (one is on Chartres Street, the other is on Royal Street), or take one of the guided tours during the day. See part of a New Orleans streetcar (and learn about the role of segregation in transportation and other parts of daily life), and watch The French Quarter by Night, an immersive 17.5- minute film projected on four walls that takes viewers on a journey that spans more than 300 years, starting with nighttime on the land when the Native Americans were the only ones living there to a raucous night on Bourbon Street in 2017. “Art in the City” is an exhibit of local art from postmodern to post-Katrina and the interactive exhibits in the Education Galleries are for kids of all ages, with video clips, touchable objects, archaeological material, VR headset and even smelling stations with the scent of the river, a barnyard and more. Several tower viewers angled to the courtyard below show videos of NOLA life during different era. After you’ve checked out the space, stay for a snack or lunch at Café Cour, which offers locally sourced ingredients and authentic fare like black-eyed pea fritters, Gulf charcuterie and muffulettu, the Sicilian precursor to the muffaletta. 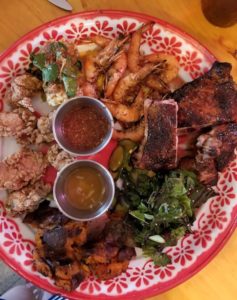 For a fun and casual lunch, take an Uber to Marjies Grill on South Broad. Owners Caitlin Carney and Marcus Jacobs travel to Thailand every two years for research, and it shows in their eclectic, inventive fusion of New Orleans Creole with the flavors of Southeast Asia. (Their version of a crawfish boil tosses the mudbugs with lemongrass, sambal butter, herbs and lime, crispy fresh crackling gets a dusting of turmeric and chili spice and BBQ snow peas are topped with BBQ vinegar, mint and chili rub.) Order all of them to share, then get an individual or communal lunch plate, where different meats/seafood are paired with a selection of sides. (If you are coming with a group it’s really best to order all of the things.) Cornmeal-fried oysters, slow-grilled pork, charcoal-grilled shrimp, honey butter yardbird and grilled gulfish all come with fun Southeast Asian dipping sauces; sides like som tam made with whatever market veggies are fresh at the time, grilled greens with fish sauce and sesame and coal-roasted sweet potatoes are not your average accompaniments. Oh, and since it’s New Orleans, you can obviously get a good cocktail here; No One Rides for Free is a Last Word/Gimlet mash-up with cucumber, vodka, green Chartreuse, lime and Dolin Blanc Vermouth. And the wine list is as delightfully unexpected as the food, with off-the-beaten-path varietals and regions and some natural wines.

If you spend all of your time in NOLA in the French Quarter, you are missing some of the most vibrant and historic neighborhoods in the country. The best way to really cover ground in the city is by booking an afternoon tour with Freewheelin’ Bike Tours, who did it first and do it best. They offer tours of the Garden District and the Marigny and Bywater, but the most popular option is Creole and Crescent, which shows you a bit of everything. Single riders cost $49 plus tax, and the minimum age is 12 (kids younger than that might not feel comfortable riding alongside traffic anyway.) Tours are limited to 10 riders per tour twice a day, and each one lasts approximately three hours and covers 8 miles. (Since New Orleans is flat it’s easygoing pretty much the entire time.) Bicycles are American-made, single-speed cruisers with front hand brakes, rear coaster brake, basket and bell, and a helmet is included, and the crew also gives you cold bottled water and a poncho if it’s raining. You’ll pass through the Marigny and Bywater neighborhoods and through Faubourg, the city’s first suburb and home to the largest collection of 19th-century homes in America. Ride among the mansions on Esplanade Avenue, then see the above-ground crypts in Saint Louis Cemetery #3 and learn why this type of burial is required in this area. Explore City Park (larger than New York’s Central Park), including the largest grove of mature oak trees in the world. Stop off at a local coffee shop for some iced coffee and chicory before heading back through the Treme neighborhood, where you can always find good jazz and good food. It really is a must-do excursion no matter if it’s your first or fifth time to the Big Easy.

Ask any local where to hear good jazz and the answer will be Frenchmen Street. It’s a little reminiscent of Broadway in Nashville, a several-block stretch lined with bars and live music of all kinds. While you might think it’s off limits for the under-21 set, you can hit several spots with kids in tow. The Maison and Three Muses let kids attend the early shows, which usually start around 4 or 5 p.m. (check the website or call for details) and are perfect for a pre-dinner stop. If you are sans kids or your kids are of age, you can also hit The Spotted Cat and Snug Harbor later that evening.

The hottest table in town right now for dinner is at Justine, the new handsome French bistro that opens up onto Chartres Street. The kitchen is helmed by James Beard Award-winning chef Justin Devilier, who along with his wife is a partner in La Petite Grocery and Balise. Not surprisingly, the cocktail list is peppered with French ingredients; try the Blind River, with gin, genever, orange bitters, blanc vermouth and Benedictine. The take on a lobster roll tops a buttery slab of brioche toast with sweet lobster, spoonfuls of caviar, dill sprigs and a tarragon emulsion, while a marrow-filled bone shank comes atop fluffy mashed potatoes and rich Bordelaise sauce. Other classic and well-executed dishes include moules frites à la marinière and entrecôte de boeuf, a seasoned seared rib eye that’s irresistible with or without a side of sauteed mushrooms; both dishes are sized for sharing. Save room for the photo-worthy pavlova, a crunchy egg white meringue filled with passion fruit and coconut.