7 Places to Celebrate Being Irish in March

When the holiday that celebrates leprechauns, shamrocks and the luck of the Irish comes around, most of the country finds a way to celebrate everything Irish and the patron saint, Patrick.

There are more than 30 million Americans who come from some type of Irish descent. That’s more than seven times the population of Ireland. There are so many ways to be Irish on St. Patrick’s Day, March 17, most cities turned it into a month-long celebration. Here are some of the most fun places to toast the Irish or be one in the month of March.

Named by the United States Census as one of the top Irish cities in America, Syracuse, New York, knows how to wear its green on St. Patrick’s Day and most of the days leading up to it. Don’t miss the city’s transformation during its annual St. Patrick’s Day parade as skirted bagpipers blow their way down Erie Street followed by horse-drawn carriages and floats carrying families sporting various shades of mint, emerald and teal. When you’re done applauding, make your way to Coleman’s Authentic Irish Pub where they take their green beer with a shot of shamrock. Touted as the working man’s saloon, operating since 1933, Coleman’s strives to keep it real despite its growing popularity. If you happen to see a tiny door welcoming leprechauns into Coleman’s after a few green beers, don’t worry. It’s a real door and showcases the establishment’s welcoming spirit. Finally, we know you wouldn’t drive after all those green libations, but when your taxi passes a streetlight on Tipperary Hill, with the green light flashing above the red one, again, no worries. It’s the city’s statement that Irish green is mightier than British red. 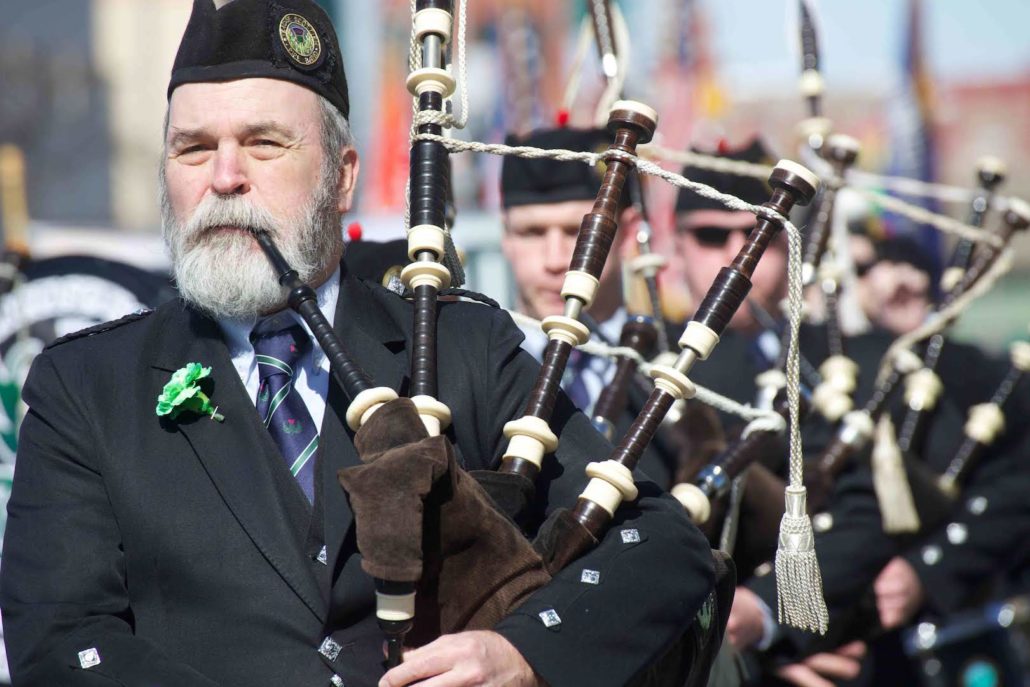 Another place to find leprechaun doors is the city that’s not quite Ireland, but close. The city of Dublin, Ohio, has a trail of fairy doors, perfect for kids to discover as they roam around the business district of downtown Dublin. Dublin, Ohio ,also lives up to its sister city’s lucky reputation by presenting the world’s first Celtic Cocktail Trail. You won’t want to miss any of the 18 concoctions celebrating Irish roots, though they don’t recommend you try them all on the same day. 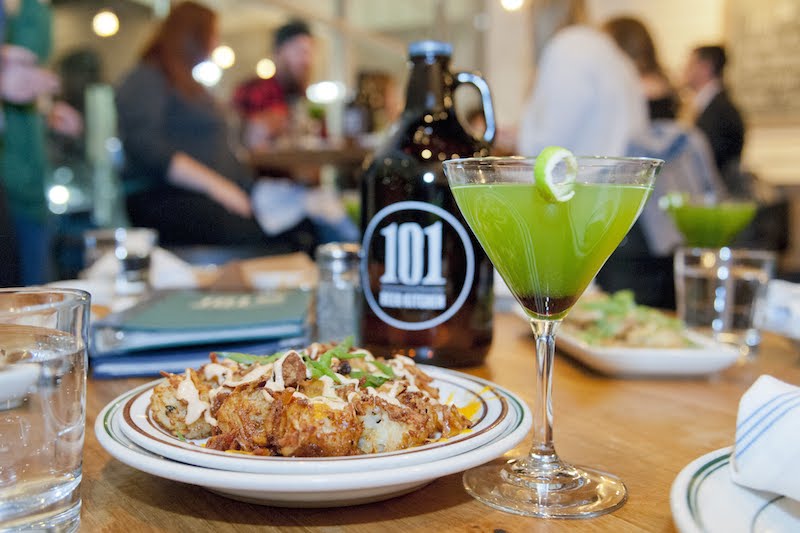 If you’re in Chicago during St. Patrick’s Day, it’s best if you just go with the flow — the flow of the Chicago River, that is. On the morning of March 14, between Columbus and Wacker drives, the city pours a green, vegetable-based dye into the river, turning it into the most opulent shade of emerald to celebrate the Irish day of mischief and revelry. The best area to view this phenomenon is between State and Columbus streets, but get there early because 400,000 of your friends will also want to witness this marvel that lasts for about five hours before the tide disperses the colorful addition. If you don’t want to battle the throng, consider booking a brunch at Travelle, which overlooks the river, offering a quieter and yummier experience of the verdant tide. After, enjoy the celebratory parade that commences on Columbus Street accompanied to a soundtrack of traditional bagpipes and floats. 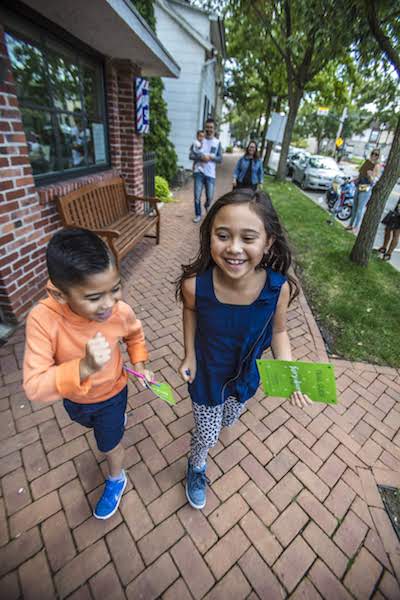 Listen, there’s always something happening in Vegas and the opportunity to celebrate a holiday which much of the U.S. population only equates to drinking green beer couldn’t be overlooked. The five-day party leading to St. Patrick’s Day starts on the six-block stretch of the Fremont Street Experience and involves strolling flash mobs, magnetic dancers, DJs, two production shows and 40 hours of free, live music from 19 bands on three stages.

With the largest population of Irish descendants in the country, Boston is the first city in the world to celebrate St. Patrick’s Day. With its staggering amount of green pride, Boston celebrations began March 8, during the Harpoon Shamrock Splash where costumed revelers arrive to raise money for Boston beaches and waterways while taking a dunk in the frosty waters in front of the BCYF Curley Community Center. Also, of course, one of the largest parades happens every year the Sunday before March 17.

New Orleans is so much more than just Mardi Gras — St. Patrick’s Day is a great time to visit the city because the crowds have gone home to recuperate and the true spirit of the Irish can roam the streets. Seriously, there are many parades celebrating the Irish spirit in New Orleans in March with the biggest on the 14th by the Irish Channel and the 17th by the Downtown Irish Club. Dancers, musicians, green libations and food being thrown from floats are some of the highlights. Food? Yes! They don’t want you to drink on an empty stomach so float riders throw ingredients to make traditional Irish dishes like cabbage, potatoes and carrots to spectators. If you’ve had too much fun, stay at one of the many hotels along the Irish Club parade route, like Hotel Mazarin or Hotel le Marais or Bourbon Orleans. 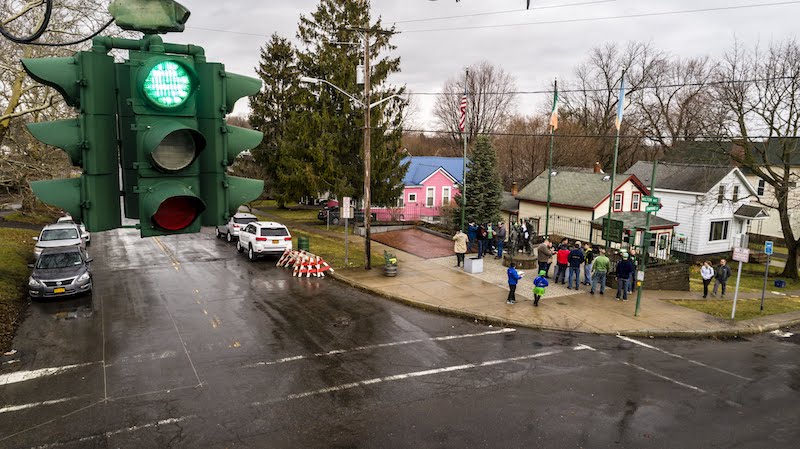 Finally, if you just can’t stay away, come celebrate the season of St. Patrick’s Day in a real, 800-year-old Irish castle. Ashford Castle’s 83 rooms, suites and lakeside cottage have gotten a ton of awards for being the most unique and luxurious hotel accommodations from National Geographic, Fodor’s and TripAdvisor. Plus, it earned a best spa in Ireland award from Irish Tattler magazine. Now, they’re bringing the true world of Ireland to the guests that stay there. Four experiences take visitors into the storybook lives of the Irish people. In one, guests can visit the workshops of furniture makers and stone carvers. In another, visit a working sheep farm, make soda bread, find tasty seafood with a forager and cultivate honey donned in a bee suit. One option lets explorers learn about the history of Ireland through music and song or walk the real Connemara trail far from the tourist throng.

Due to Coronavirus (COVID-19) concerns, please check to see that the above events are still occurring or look for their new scheduled times and dates.