Families with children of theme-park-age might want to put Jungle Island in Miami on their radar. The 80-year-old park is celebrating its multimillion-dollar rebirth as an eco-adventure destination with an eye-popping Festival of Lights, set to run through Jan. 8.

The highlight of the relaunch is Luminosa, A Festival of Lights, its first-ever Chinese lantern festival, which debuted Oct. 5.

To create the eye-popping attraction, which will span 13 of the park’s 18 acres and take visitors on an illuminated journey through the jungle at night, Jungle Island teamed up with Zigong Lantern Group, a leading Chinese lantern festival company.

Hundreds of life-sized lanterns were handcrafted out of silk by Chinese artisans to create a dazzling nighttime experience, with such visuals as a sea of glowing jellyfish, giant orchids and flowers and recreations of some of the world’s rarest animals. The selection of light installations is an homage to the theme park’s South Florida home by including some of Miami’s most exotic wildlife and iconic places.

The journey tells a magical story of the jungle, which begins with an exploration of wildlife, birds, blooms and the beautiful Biscayne Bay. It then looks into the future through a story of transformation, rooted in adventure and infused with Miami’s new vibrant urban art identity.

“Luminosa at Jungle Island is certain to be one of the most Instagram-worthy and talked about events of the season,” says Curtis Crider, general manager, Jungle Island. “Between the rich history behind the festival and its beautiful pageantry set within a jungle-like setting, this must-see installation will be a celebration of two cultures coming together and the rebirth of an iconic South Florida attraction.”

A few of the visual highlights will include oversized orchids and flowers and striking silk parrots in the “Birds and Blooms” exhibit; a sea of glowing jellyfish in the Biscayne Bay display; some of the world’s rarest animals down Jungle Trail; and a 114-foot-long by 26-foot-tall panoramic rendition of an iconic Miami destination decked out in Chinese graffiti art in the “Miami Style” exhibit. 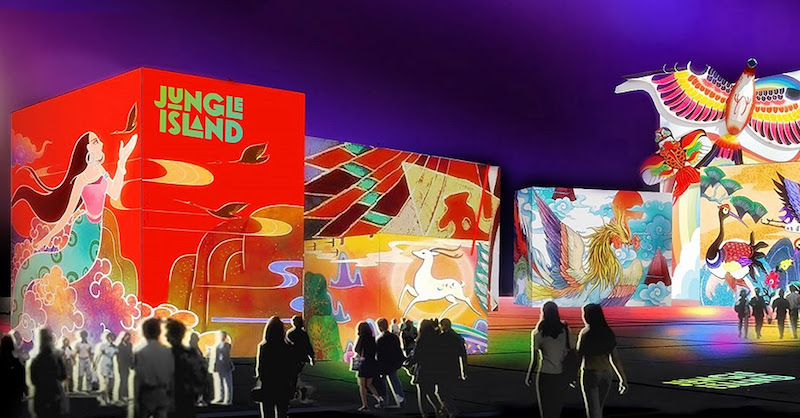 All lanterns will be illuminated by more than 1 million environmentally friendly LED lights and made out of water-proof and fire-resistant materials, supported by steel frames.

The Chinese Lantern Festival is believed to date back 2,000 years ago to the Eastern Han Dynasty when Buddhist monks would light lanterns in the temples. Traditionally, the Lantern Festival marks the end of the Chinese New Year, also known as Spring Festival. The lanterns are thought to symbolize people letting go of their pasts and celebrating a new future, much like Jungle Island.

Elie Mimoun, partner, ESJ Capital Partners, owners of Jungle Island, said, “Our vision for the evolution of Jungle Island is to include regularly scheduled events and experiences that bring the spirit of the jungle to life. Luminosa reinforces this position and appeals to all audiences in search of discovery and adventure within the context of nature and wildlife.”

Jungle Island’s transformation will continue in the coming months with new eco-adventure attractions, including an aerial adventure park and treetop village, as well as SuperFlight skydiving simulator and new rare animal interactions.

Tickets for Luminosa are already on sale for $35.95 per adult and $30.95 per child. Visitors can take advantage of a 20 percent discount when they buy in advance online.