For a fabulous fairytale getaway, few places compare to an enchanted stay in Verride Palácio de Santa Catarina, once an elegant 18th-century Portuguese palace in Lisbon. The transformation of this palatial townhouse into an extraordinary, aristocratic, 19-room boutique hotel, opened in December 2017, was a group effort by first-time hoteliers Kees Eijrond and Naush Kanji and their design team, architect Teresa Nunes da Ponte, interior designer Andrea Previ and Mr. Kanji. 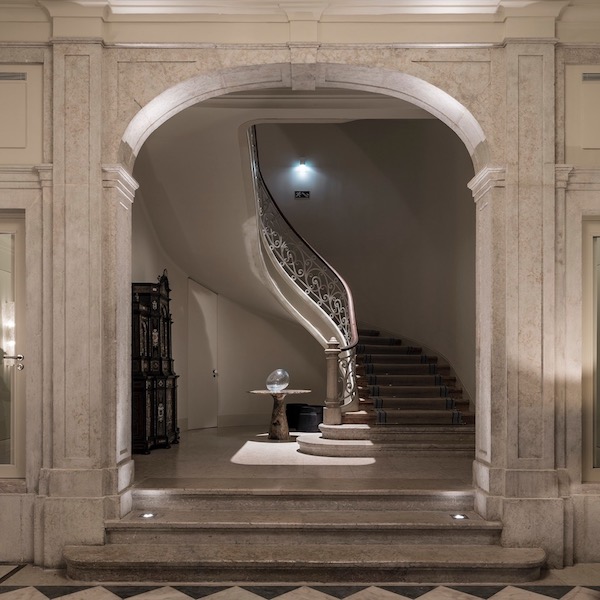 A uniformed valet stands guard at the arched entry, opens the doors to a small, stylish, marble-floored lobby where a curved marble staircase with an ornamental wrought iron railing seemingly floats above a classic piece, the 1969 white Carrara marble “M Table” by Angelo Mangiarotti. From the lobby, doorways lead to a light-filled breakfast room, its adjacent sun deck terrace, a small swimming pool and the glass-walled elevator, through which the Tejo River and red-tile rooftops appear.

Up one flight, on the traditional high-ceilinged “noble” floor, two Royal Suites flank the elegant Yellow Lounge, with its mustard-colored Minotti leather sofa and hand-painted silk De Gournay wallpaper. The contemporary look is warmed by the owner’s collection of photographs, paintings and family treasures, including a Murano chandelier. The lounge can be privatized as part of the Royal Suite; at other times, the tasteful sitting room is open to all guests. The King Suite occupies the adjacent, original, wood-paneled library, decorated with modern-day furniture set under an extravagant, wooden-coffered ceiling. 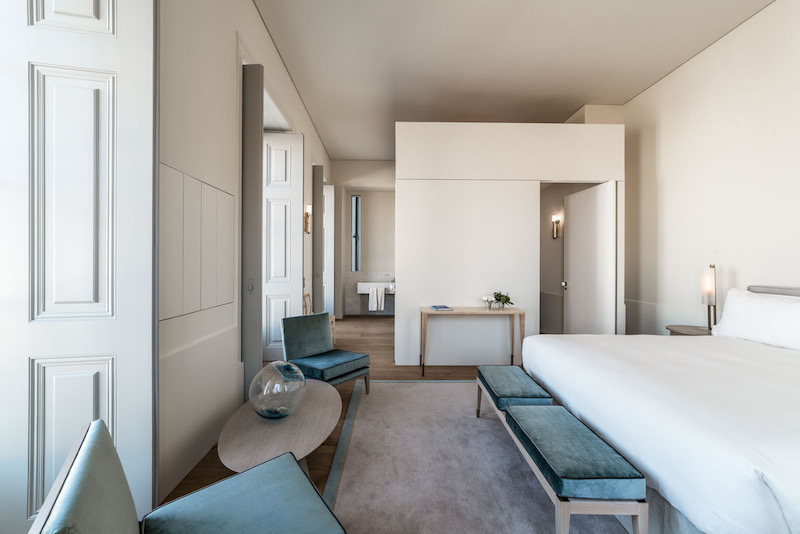 The enticing Queen Suite, on the other side of the staircase, occupies the grand, former dining room. Its entry foyer is dominated by a free-standing, oval bathtub and decorated with original blue-and-white Azulejo tile murals that depict Count Verride in a hunting scene, circa 1910. The bed is centered in a room with Rococo-styled woodwork; high, sculptured ceilings; and decorative mirrors and faces the grand windows and the park and river view. The Arch Suite, yet another heritage room, showcases an original 18th-century exposed stone arch.

Each accommodation has its own unique configuration and they all repeat the joyful juxtaposition of contemporary and original details, such as arches, wood floors and grand windows, many with folding wood-paneled shutters. White plaster walls dominate, though in some places, guests can see the original walls, and the sleek décor with minimalist furniture, including multiple custom-made desks and chairs by J C Sampaio, brings the ambiance up to the minute. The predominantly neutral color palette extends to area rugs, made-in-Portugal sheets by Celso de Lemos and pops of color appear here (on a border of a rug) and there (on a chair cushion) and include blue and purple velvet fabrics (by Pedroso & Osório) and yellow glass orbs (by Claudio Buarque). Deluxe rooms face the red-tile roofs in the Bica district, while superior suites, such as the one we enjoyed, have expansive views of the Tejo River; some, like ours, also feature a riverfront balcony. Each of the pale grey marble bathrooms are sleek, have showers and sultry cream-colored Egyptian cotton towels by Abyss. Historic preservation rules restricted building a spa, but en suite spa services are provided by a top local facility.) 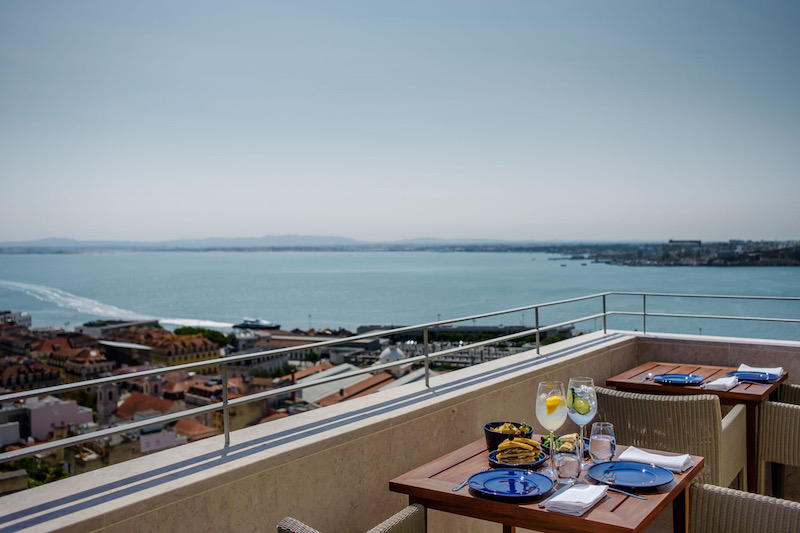 The casually chic Suba Restaurant and rooftop terrace — where food is served à la carte or by menu — provides amazing river views. For breakfast, traditional Portuguese fare is served at a communal table or by the pool with a selection of homemade breads, cakes, hams and cheeses; the cook prepares well-regarded to-order dishes, including scrambled eggs.

The boutique hotel stands alone, its stately façade — with tall windows on the Noble Floor — and overlooks a small park adjacent to the riverside promenade, alsoedged by the famous Pharmacy Museum. The two venues feel isolated from the capital city, yet it’s only one short, narrow block to the yellow trams and century-old cafés that line the cobblestone streets in the dynamic Bica district, which abuts the fabulous Lisbon destination neighborhood, Barrio Alto.

7 Smithsonian Institute Museums Your Family Should Visit in D.C.

Walking across The National Mall, I literally crossed paths with Lonnie G. Bunch III, the Smithsonian Institution’s first African American CEO. Dr. Bunch, who first visited the Smithsonian as a 10-year-old Civil War buff, was told by his father, “Here’s a place where you can understand yourself and your country and not be worried by the color of your skin.” Bunch, who famously created the Smithsonian’s National Museum of African American History and Culture, was quoted as saying, “I wanted to give back to those institutions that shaped everything I am.”

How to DO A.C. With the Family

Sure, we’re barely dipping our toes into winter weather, but isn’t it more fun to think ahead to the warm weather family fun your crew could have at the Jersey Shore? Luckily, Atlantic City, New Jersey, offers far more than sandy beaches and casinos — enough to entertain all ages in all sorts of weather.

There may come a time when little kids start looking for a little more adventure from theme parks. While Magic Kingdom and Sesame Place are always fun, the kids might seek the adventure bigger theme parks offer.

The magic of gliding on ice is a beloved activity shared across generations. It’s beautiful, fun and exciting with only minimal danger; tumbles are rarely harmful because one foot is always on the ground.