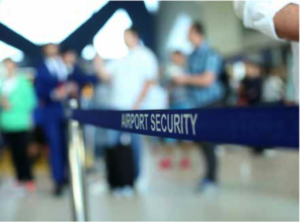 Airport control relies on readily available methods, from the mundane (like fences and doors with alarms) to the invisible (surveillance cameras and motion detectors). Security methods continue to evolve, but most experts agree the best deterrence takes place before a would-be miscreant ever gets to the terminal. Screening passengers (not to mention crew and airport staff ) for contraband is routine if overrated. We all know of mistakes by Transportation Security Administration personnel who’ve let potential hazards pass by unnoticed — and nothing bad has happened.

“Security is both a feeling and a reality, and the two are different things. People can feel secure when they’re actually not, and they can be secure even when they believe otherwise,” noted Bruce Schneier, a self-described public- interest technologist who works at the “intersection of security, technology, and people.”

He pointed out, “Airport security is the last line of defense, and it’s not a very good one. What works is investigation and intelligence: security that works regardless of the terrorist tactic or target.”

Kevin Garrison, a retired senior airline captain who writes frequently about aviation, predicted, “Security will have to become invisible and so easily done that nobody thinks about it anymore.”

Keep in mind airplane terrorism has always been incredibly rare. According to Schneier, “The risk is no greater today than it was in previous decades.” He noted the drive to the airport is still more dangerous than the flight. According to the Highway Loss Data Institute, there were 33,654 fatal motor vehicle crashes in the United States in 2018, in which 36,560 deaths occurred. This resulted in 11.2 deaths per 100,000 people. Aviation deaths? Fewer than 400 in 2018, said the National Transportation Safety Board. The overwhelming majority of aviation fatalities involve small, private airplanes and not large commercial airliners.

Airports are slowly renovating to provide more amenities to their highest revenue passengers, from dedicated check-in desks to chauffeured rides across the tarmac at flight departure. Lounge construction continues. At Tokyo’s Haneda Airport, Delta Air Lines started construction on a new Sky Club set to open in early July. (The carrier transferred its Tokyo-bound flights from Narita Airport to Haneda earlier this spring.)

Airports represent the public face of air travel, and the International Air Transport Association expects some $1.2–1.5 trillion to be spent on global airport infrastructure development in the coming decade. Meanwhile, airlines also work to make timely operational projections available to passengers. Delta, for instance, launched SkyWatch Daily Outlook to provide its customers with timely information on flight delays and cancellations.

What about after takeoff ? The airspace just above airports has been under assault from birds (think about geese sucked into airplane engines), not to mention the potential dangers of drones and laser pointers.

Airports have tried a variety of methods to scare birds away, from fireworks to loud noises, but one of the most successful seems to be the use of falconers and their birds of prey. Falcon Environmental Services’ wildlife control officers do the job at Toronto Pearson International Airport and Montréal’s Pierre Elliott-Trudeau International. Trained dogs also have been successful in chasing birds from runway areas. 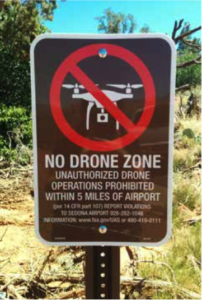 As for drones, federal rules forbid operating a drone within five miles of most airports or above 400 feet without a waiver from the Federal Aviation Administration. You must get permission in advance from air traffic control to fly in the controlled airspace of an airport — and that’s only possible if you already have a Remote Pilot Certificate and are following Part 107 of FAA regulations. Drone experts think the airport sightings reported thus far are in the same category as UFO sightings. As Vic Moss, a founder of Drone U, a drone-operator school based in Albuquerque, New Mexico, said, “It’s possible, but it’s just incredibly unlikely that it was an actual drone.”

Lasers? Most laser pointers aren’t powerful enough to reach an aircraft in flight. During takeoff and landing, however, planes are closer to the ground, and it’s possible (although unlikely) to angle a laser such that it interferes with a pilot’s vision — though it is difficult to keep a handheld laser focused on a moving target.

In the air, commercial jets fly routes around the world, including high above some hot spots such as the Crimea, Iraq and Libya. Despite a handful of high-profile incidents (such as the targeting of a Ukrainian commercial airliner departing from Tehran recently, and the downing of a Korean Airlines passenger jet when it inadvertently strayed into restricted Russian airspace in 1983), the dangers are seen as almost negligible because each airliner’s route is calibrated to avoid recently determined no-fly zones.

What’s ahead? In the short term, airlines are reassessing their reliance on the hub-and-spoke routing that’s become routine in recent years. It’s increasingly seen as inefficient both in flying time for passengers and fuel use by aircraft, noted Garrison, the retired pilot.

Other guesses? Hyper loop or just super-fast trains connecting cities with larger airports. Right now, for example, if it takes five hours or less to drive between destinations, driving is faster than flying, once you calculate transit time to and from airports, check-in times and time in the air. Anyone who’s ridden the rails in China, Japan or much of Europe knows high-speed train travel can prove more efficient than flying and can free up airspace gridlock issues resulting from rapid aviation growth, another issue facing the industry.

The IATA recently inked a global intermodal memorandum of understanding with the International Union of Railways specifically to work on coordination. The airport at Frankfurt-am-Main, for example, includes a train station served by long-distance, high-speed trains.

“The United States still has the safest, most efficient airspace and airports in the world,” noted Shelly deZevallos, president, West Houston Airport. However, she said, “The last major airport built in the United States was in 1995 — Denver International — more than 15 years ago. This in no way keeps up with our aviation growth needs.”

Urban Air Mobility is one up-and-coming development requiring redesigned airports, she reported. NASA defines UAM as “a safe and efficient air transportation system where everything from small package delivery drones to passenger- carrying air taxis is operating above populated areas.” Changes in airport layout would be critical for its success: Instead of terminals between runways, passenger drop-off and loading should be to the side, DeZevallos noted, to avoid collisions.

What’s in the far future? Certainly, space tourism. It’s been promised for decades, but recent advances bring the concept closer to reality. Space flight will be available to civilians as well as astronauts and, perhaps, will serve as flights between far-flung earthly destinations. It’s such a hot topic, Embry-Riddle Aeronautical University already offers a course in Space Tourism.“WithVirgin Galactic now close to completing construction on its second commercial spacecraft, the wait is nearly over,” predicted Dr. Robert Goehich, who teaches the course via Embry-Riddle’s worldwide campus.