There is certainly no shortage of things to see in and around Athens, but there are some pretty amazing sites to see outside of the city as well. If you’ve got the time, make the most of your trip to Greece and head out into the countryside to enjoy some of these excursions, all within driving distance from the country’s capital.

The archaeological site of Delphi is about three hours from Athens by car. Dedicated to the Greek god Apollo, this site was the home of the ancient oracle of Delphi. Visitors would travel from all over the country to have their fortunes told and leave offerings for the deity, Apollo. Today, visitors can enjoy an enormous, well-preserved archaeological site that sits high in the mountains overlooking beautiful valleys.

The site is located west of Athens facing the Gulf of Corinth. After your visit to the site continue in the same direction and head down the mountain for a relaxing lunch at one of the seaside restaurants in the town of Galaxidi where you can rest up and enjoy some of Greece’s famous seafood.

South of Athens, Nemea is about two hours by car and can easily be visited in a day. The trip involves crossing the Canal of Corinth, worth a stop for a coffee and a souvlaki along with some amazing photo opportunities overlooking the canal. Nemea is the home of an ancient archaeological site well worth the trip due to its well-preserved remains of an ancient temple and its place in mythology as the site where Hercules killed the Nemean lion. 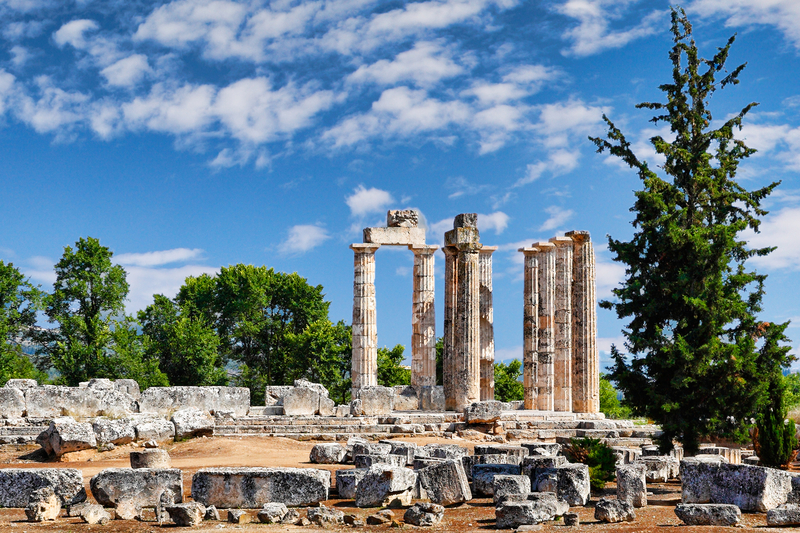 The surrounding countryside is lush with greenery and produces some of the country’s finest fruits, including grapes. There are wonderful wineries to visit along the way and if you see a road-side fruit stand make sure you stop to pick up some farm-fresh produce.

Located on the western side of the Peleponnesian peninsula, this ancient archaeological site is the original home of the Olympic games. A daytrip to Olympia is a great way to see the rural Greek countryside and takes about five hours by car, not including bathroom and coffee breaks.

Olympia is one of the best-preserved ancient sites in all of Greece and consists of the remnants of temples, sanctuaries, statues, a stadium and a wrestling school, just to name a few. The site is enormous and you should plan on spending several hours exploring the grounds. Entrance is €12 and includes admission to the site, the Museum of Ancient Olympia and the Museum of the History of the Olympic Games.

If you’ve got the extra time to spare then make this a two-day excursion and take advantage of the opportunity to spend the night in a quaint seaside village where you can enjoy the beautiful beaches and some delicious local dishes.