Los Angeles is a colorful mix of pretty much every ethnicity, religion, race and sexual orientation. This geographical gift translates into the ultimate foodie scene, a complex fashion portfolio and a Babylon of neighborhoods living side by side. Some business owners are aware of this and some go out of their way to embrace and even celebrate the complexity of L.A. culture. We found the sweetest businesses around LA that go out of their way to make everyone, especially LGBTQ+ families, feel appreciated. 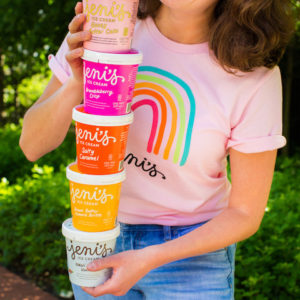 Owner Jeni Bauer redefined ice cream making and the art of business when she opened her first shop in 2002. Her ice cream is a Fourth of July fireworks sensation gliding down your tastebuds. It’s whole food ingredients, grass-fed cow milk and relationships with every family-owned company that provides her the magical ingredients to create her unique flavors.

#TeamJeni marches in Pride parades and donates a percentage of the profits to organizations that support the LGBTQ+ community. She has four locations in Los Angeles: Calabasas, Los Feliz, Venice and Larchmont Village.

First inspired by a little girl who couldn’t eat desserts because of allergies, Celine Ikeler became determined to help and created a garbanzo bean brownie that quickly became a hit in her neighborhood. Ikeler herself started eating a purely plant-based diet and opened her bakery using only vegan, high-quality, gluten-free ingredients that are surprisingly amazing. Her Karma Cakes look like the Hostess Cupcakes of childhood memory but taste insanely good and are much better for you. She also makes pizza rolls and bread with the same high standards. Her husband, Arek’s godfather, already made the Oscar-winning movie, Trevor, about a teen who realizes he’s gay and contemplates suicide. Both now support the Trevor Project and GLAD and regularly make unusual cakes by request of their LGBTQ+ customers. The bakery borders LA in Oak Park.

They’re not only about donuts and equality, they’re about making sure the donuts are Instagram-able hits! The unicorn and mermaid donut collections are the envy of cover models and they make a special rainbow donut for Pride month. Even though the donuts are made mostly of potato flour, they do have a smidge of wheat. So, if you’re gluten-free, make sure to special order in one of the two locations around Los Angeles, Canoga Park and, LA adjacent, Newbury Park.

It started on the ice rink where games were followed by good old-fashioned doughnuts and, years later, Elliot Spaisman and Jeff Halpern turned their love of comfort food into accolades for their fried chicken and unique doughnut flavors. Although Halpern is still heavily involved in the business of hockey, Spaisman keeps a watchful eye on the development of the three nationwide shops, one in Downtown LA. They make a rainbow donut for Pride month, too. Some guests like to put rainbow sprinkles on the chicken, too.

Many know of the great social strides the company makes to promote awareness of the many issues plaguing society as well as their effort to save the planet by sourcing only the most wholesome ingredients for their ice cream. They also have a movement specifically addressing LGBTQ+ rights and were the first employer in their home state of Vermont to give health benefits to same-sex domestic couples. After the Supreme Court ruled to recognize same-sex marriage, Ben & Jerry’s temporarily renamed the Chocolate Chip Cookie Dough ice cream to I Dough, I Dough. Nice work, guys. They have five shops in Los Angeles.