If the 2016 booming centennial of America’s National Parks is any indication, the 2019 100th anniversary of Grand Canyon National Park is sure to be a doozy, indeed. If you’ve been thinking about hitting up one of the United States’ most iconic chasms, now’s the time to reserve a space — especially since lodgings are already filling up for high season (with 6 million domestic and international visitors in an average year, it’s no wonder).

Some great options worth exploring include the Grand Canyon Lodges, six different hotels collectively part of the Historic Hotels of America. While they have all the modern accoutrements, they also maintain historic character. Each is located inside or just outside the South Rim.

Phantom Ranch is the only lodging below the canyon rim. But don’t think you’re simply going to drive here — getting there is part of the adventure. Reachable by mule, on foot or rafting the Colorado River, the 1920s-era cabins’ wood and stone blend beautifully with the surroundings. Cabins are meant for two to 10 people, and have air conditioning, bedding and running water, but there are no phones or TVs. (There are also dorm accommodations for hikers only.) If you want to get in, it’s by lottery, so enter sooner rather than later.

The 250 rooms nestled in the Ponderosa pine forest at Maswik Lodge are more contemporary and were built in the 1960s. Southwest furnishings are simple with Southwestern flair, but space will be limited starting in January 2019 since about half of the property (the South Complex) will close for construction for up to two years. Reserving here now for Maswik North rooms (spread throughout 12 two-story buildings) is crucial. You’ll be either a short walk or a quarter of a mile, max, from the canyon’s edge.

You’ll be in the heart of the historic district at Thunderbird Lodge, where many of the rooms have partial canyon views. There’s one king bed or two queens, and it’s handicapped accessible (not all properties are). If you’re a hiker, Thunderbird or nearby Kachina Lodge are the places for you: You’ll be on the Rim Trail, which spans from Hermits Rest to the Kaibab Trailhead — approximately 12.8 miles. The Yavapai Geology Museum is a two-mile hike away. You’re also near Bright Angel Trail Head. 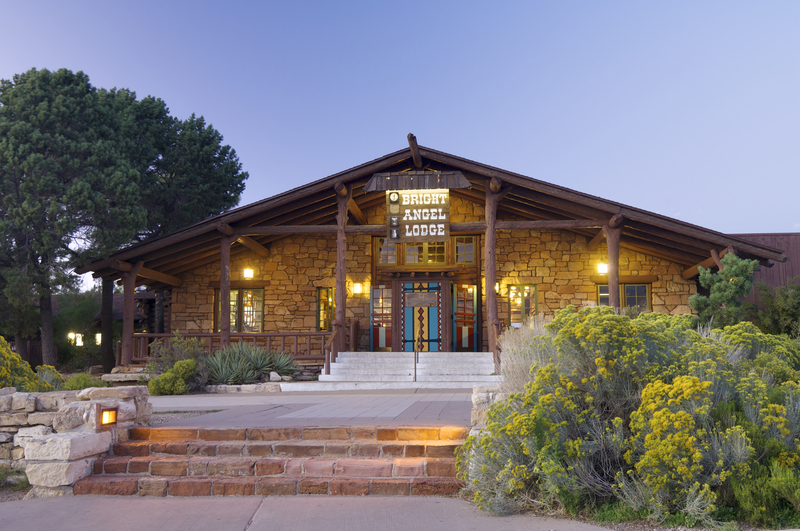 Bright Angel Lodge & Cabins is a national Historic Landmark, and its artistic touches are extraordinary. Southwest architect Mary E.J. Colter’s rustic character still shines in a “geologic” fireplace in the lobby featuring all of the rock layers of the Grand Canyon. The Buckey O’Neill Cabin, originally home to one of Roosevelt’s Rough Riders, is available for rentals, too. There’s a soda fountain, healthy diner options and an old-time saloon. Roughing it here includes possibly sharing a bathroom.

Designed by the architect of a railway magnet, El Tovar is the crown jewel of all six hotels and its architecture is a hybrid design between a Swiss chalet and a Norwegian villa. There’s bellhop service, fine dining and a lobby concierge. Both Bill Clinton and Paul McCartney stayed here, located just on the South Canyon rim. None of Tovar’s 78 rooms are alike, and there are 12 deluxe suites.

If you just can’t wait until next year, the Grand Canyon Railway & Hotel experience offers 30 percent discounts during the fall on train upgrades. Travel 130 miles round-trip to experience the Wild West with costumed cowboy characters and western musicians, who bring the good ol’ days to life aboard restored rail cars. If you can’t get a coveted South Rim hotel reservation, this is package deal is a great way to experience the culture of the area with a stay in Williams, Arizona; what’s more, the hotel’s been recently renovated and has a nice indoor pool and hot tub.

Special Events and Activities in Greater Williamsburg to Look Out For

Finding inspiration from the Netflix movie Yes Day, Fairmont Mayakoba unveiled a Yes Day-Inspired Vacation Experience for families. Families can experience a range of activities for a day of fun. Encourage your family to say yes to all the fun on offer.

Vintage clothing always makes a great conversation piece. The fabrics, textures, colors and patterns all have a unique story of where it came from and who wore it before you. Visit these vintage stores around South Street in Philadelphia to claim some one-of-a-kind pieces to make your wardrobe pop.

Gaylord Hotels invites guests to experience the Summer of More. The brand debuts its summer programming beginning May 21, running through Sept. 6 at Gaylord Texan in Texas, Gaylord Rockies in Colorado, Gaylord Palms in Florida, and Gaylord Opryland in Tennessee. Guests choose from a variety of special programming and events, including aquatic experiences, culinary offerings, spa treatments, live entertainment and more.

An Upgraded Points study, conducted in March 2021 across U.S. residents of various ages (18 and older) and genders, determined which Disney World rides were most popular. The survey participants were asked to name their favorite ride overall from Magic Kingdom, Epcot, Hollywood Studios and Animal Kingdom, as well as their favorite ride in each specific park.