Going “on safari” had never been on my bucket list. In fact, until I actually had the incredible, transformative opportunity to stay at andBeyond Phinda Private Game Reserve, a private big-five game reserve located a four-hour drive north of Durban in KwaZulu-Natal, I believed the closest to the African experience I’d ever have was on the tram ride at the Safari Park at the San Diego Zoo and the rustic train through the savannah at Disney’s Animal Kingdom, in Orlando. My recent ride through Safari West in Sonoma was like biting into the Proustian madeleine; it brought into clear focus the memories from my treks into the bush on a South African safari.

Since then, the staff has changed; andBeyond Phinda Homestead was rebuilt after a fire, but my current research affirms the experience I remember is typical of what your family’s would be. 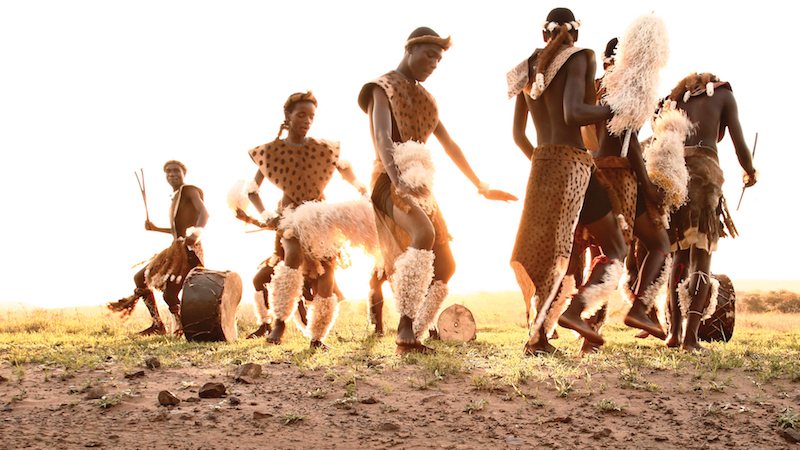 Our personal adventure began on a muddy, puddle-filled dirt road behind a guarded entry gate designed to keep the elephants in and the poachers out. It was mid-September, the beginning of South Africa’s spring, and a year’s worth of rain had fallen in the past three days. My two pals and I didn’t know it yet, but in the next 72 hours we would watch trees bud, flowers bloom and animals prance with pleasure as they drank from full-to-the-rim ponds.

On the slow, bumpy crawl, following arrows carved on wooden, camp-like road signs for much of the reserve’s 30-mile length, our driver, a native of the region, pointed to a jaw-dropping number of animals: nyala and various other antelope, a family of giraffes, baboons, buffalo and hideous wildebeests. Someone spotted a Martial eagle overhead, flying to its treetop perch. It was thrilling and we hadn’t even reached the particular lodge where we would be staying (there are a few different kinds strategically scattered throughout the top-rated private wildlife conservation development. 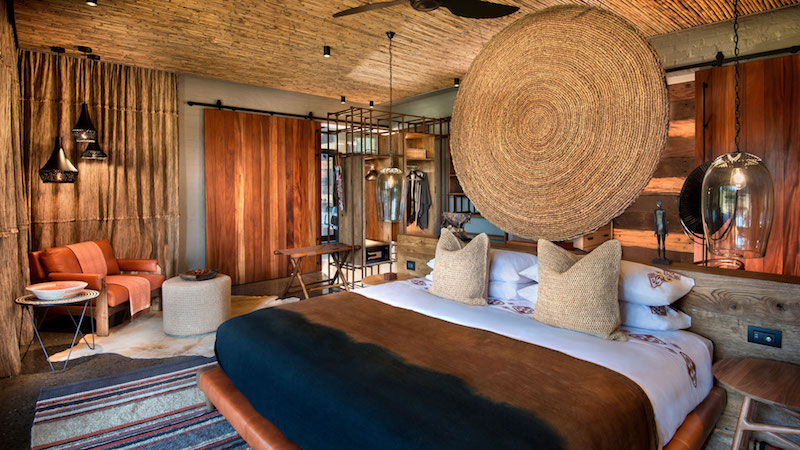 Upon arrival, the entire staff (innkeeper, ranger, scout, chef, pastry chef, butler, housekeepers) greeted us. The architecturally stunning and sprawling four-bedroom sole-use villa was specifically designed for a family accustomed to posh comfort with glass-walled bedrooms, each with enormous bathrooms fitted with glass-walled showers and a soaking tub positioned to view private decks and scenery. (It was magical see elephants outside while soaking in the tub.) There were indoor and outdoor living and dining areas, a library, massage room and a pool. 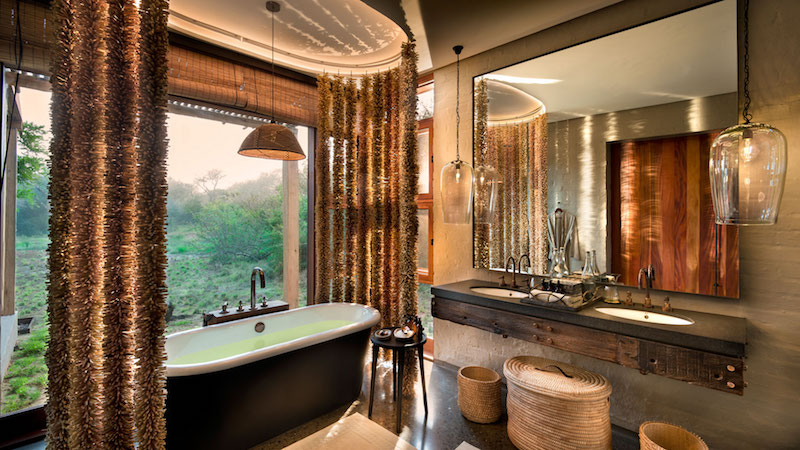 Our enthusiastic naturalist described the daily routine: a 5:30 a.m. wake-up call and light buffet, then a three-hour sunrise morning trek, a post-trek brunch, until a long, late lunch, a three-hour sunset journey and finally, a fireside dinner party. Between jaunts and feasts, there was time to sun, swim in the pool, answer emails, play board games, get a massage. 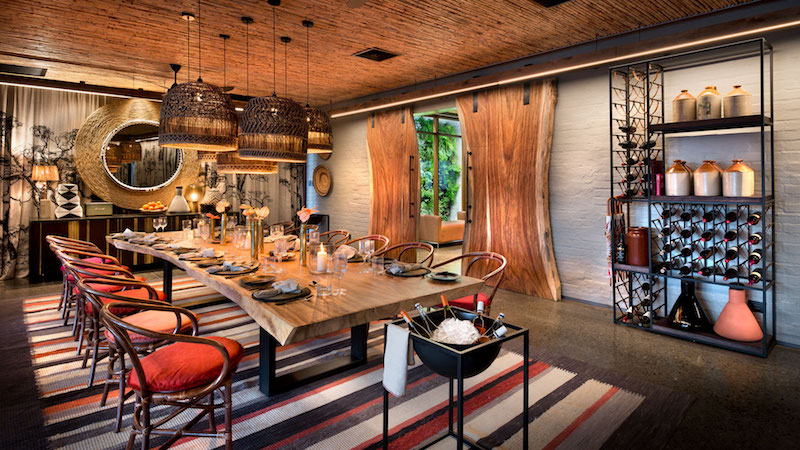 When I arrived at Phinda, I couldn’t name the “big five,” (the African lion, the African leopard, the African elephant, the Cape buffalo and the white or black rhino) and although I was familiar with the phrase “herd of antelope,” I had never heard expressions like a “dazzle of zebra,” a “journey of giraffes,” a “leap of leopards,” a “coalition of cheetah” or a “crash or rhinos.”

During each trek, we explored one section of the 70,560-acre preserve in a rugged, open-topped Toyota Land Cruiser which followed narrow dirt lanes that intersect throughout a pristine wilderness that cut through the rare dry Sand Forest, over the rocky hillsides of a mountain range to broad-leafed woodlands, marshlands, rivers, acacia grasslands and lala palm velds. Although there are other lodgings on the preserve, we never saw another vehicle or other guests, because each safari travels a different section of the 110-square mile tract. The vehicle inspired complete confidence as it tracked sturdily high above the slosh. It felt oddly familiar, like silently maneuvering a sailboat in shallow waters. And, as one does on board, they used hand signals to communicate; here, finger motions maintained the mandatory quiet and overcame the language barrier (the scout from his post — a jump seat affixed to the hood — spoke mostly Zulu; the ranger at the wheel, mostly English). 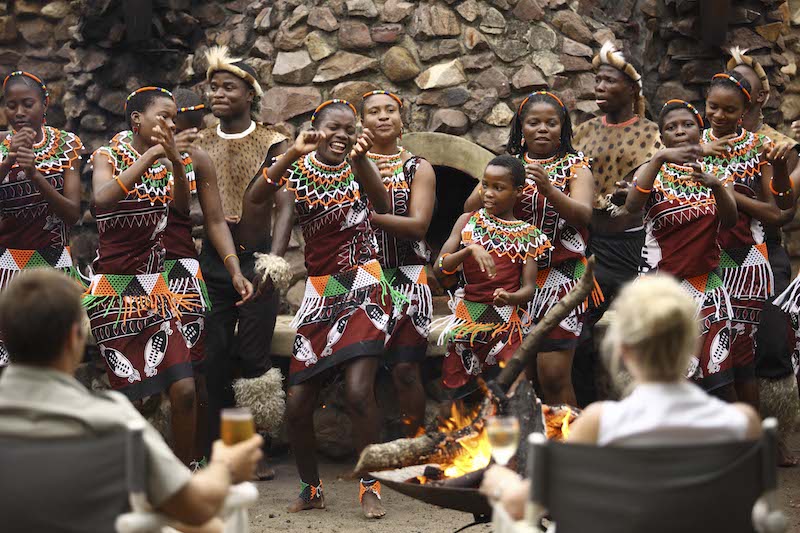 Occasionally, someone spoke: “Antelope to the right! Look at the giraffe family, aren’t they graceful? The baby is so young, it still has its umbilical cord.” We adjusted our zoom lenses. “Look, there’s a cheetah on the hill!” We spotted buffalo, a cheetah with a cub, two white rhinos and a dazzle of zebra, as well as kudu and suni, two types of antelope I never knew existed. 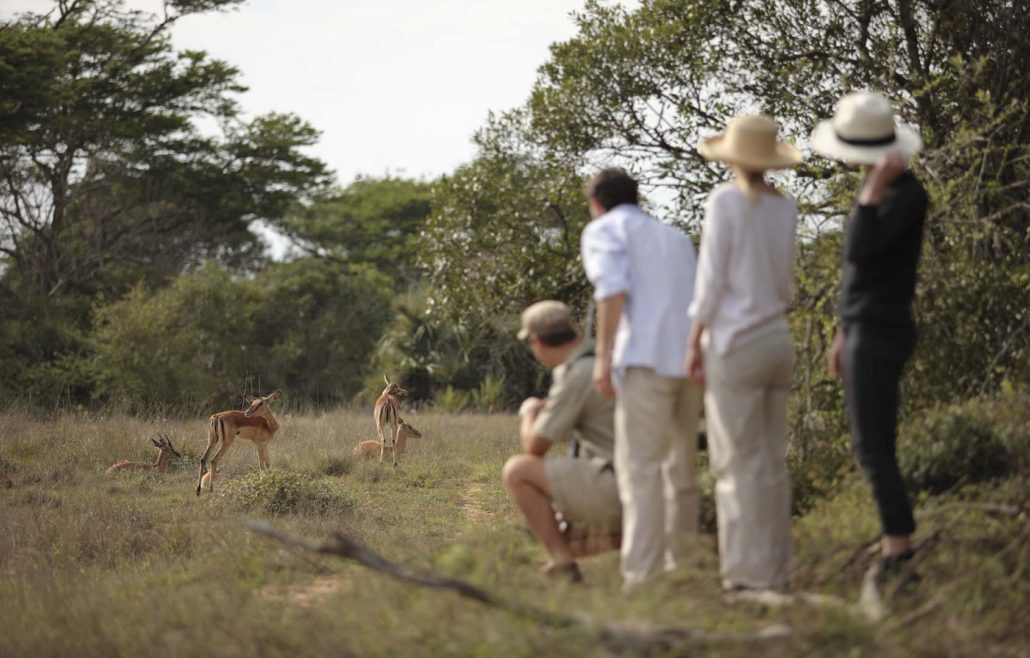 En route, we celebrated sunrise and sunset with an array of beverages; we always sat at a folding table, complete with cloth, ice bucket and glasses. One evening, our 4×4 slowed to a halt in front of a “champagne tree,” where two coolers hung from branches, one with the bottle, the other with flutes. 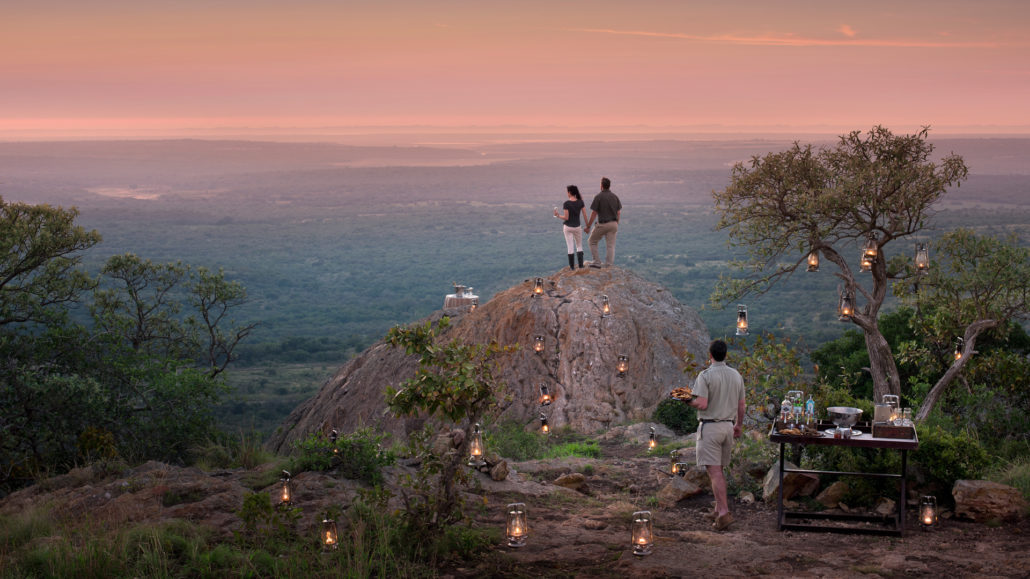 On our last sunrise safari, the ranger announced a tracker had spotted large male lion prints, a rare occurrence in a reserve of mostly female lions. We could all feel the sense of excitement as  we set out in search; en route, they exchanged hand signals, then dismounted and set out on foot — the ranger with his rifle; the scout with his panga (a long, machete-like knife). They found the flattened trail leading away from a warthog burrow; it was the sure sign a lion had dragged away a carcass; the men followed the sandy path, tracking the paw prints to a grassy field where the lion was resting while we waited in the Land Cruiser and watched. 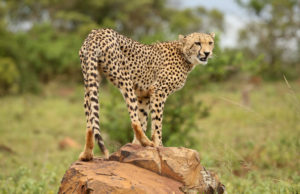 Finally, they rushed back, eager to show us the lion, and the naturalist revealed, “We have to hurry, soon the sun will warm the lion and he will move into the shade; we might never find him, again.” He gunned the Toyota through the bush over dead trees and rocks. “Duck for the branch!” Move to the left! Hang on!” Within moments, we were stopped, just 15 (maybe 20) feet from the drowsy lion lounging in the tall grass, the carcass in the nearby brush. He looked up at us from time to time, until his eyes drooped and he dropped his head for a nap.

Travel is mind altering. Places you previously didn’t know existed leave indelible impressions. People who you’ve just met soon matter. (Years later, you can reconnect, as if you saw them yesterday.) Spending time with folks devoted to caring for the land and the wildlife makes their efforts more tangible and important.

What better gift can we give our children? 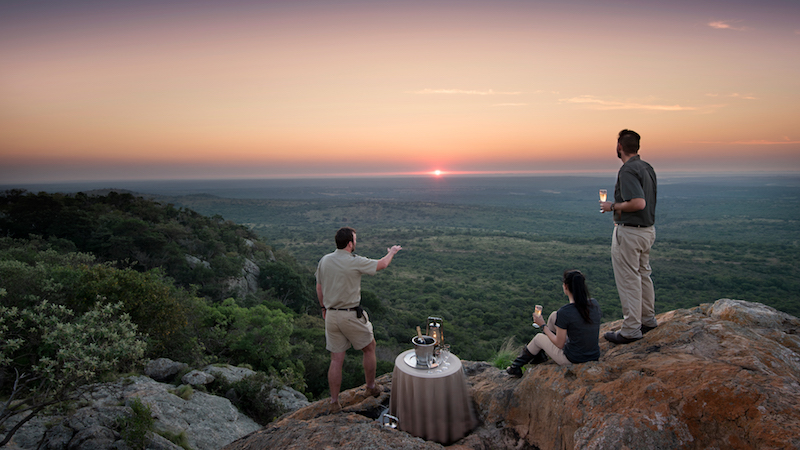 Dinner and a view. Photo: andBeyond.com