It doesn’t matter when you go, including summer, Phoenix has plenty of fun things for families to do, from museums and science centers to aquariums and waterparks.

Recognized by TripAdvisor as one of the top 20 museums in the United States, the Musical Instrument Museum displays more than 6,500 indigenous and popular instruments from 200 countries and territories. State-of-the-art audiovisual equipment allows you to hear each instrument as you approach it through headphones, and video screens show them being played. 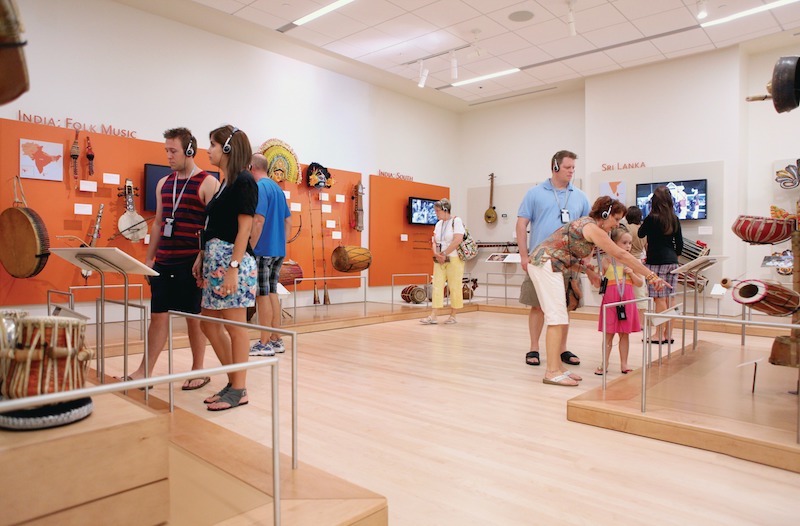 Kids of all ages will enjoy the see-through concert piano, played at scheduled intervals; the Conservation Lab, where experts repair and preserve the instruments; and the Experience Gallery, where you can play instruments like a berimbau or a djembe. Music lovers will also appreciate seeing artifacts from Taylor Swift, Johnny Cash, Elvis Presley and other greats in the Artist Gallery.

Designed for all ages, the Arizona Science Center features permanent exhibits on health, flight, finances, renewable energy, forces of nature and more. There’s also a planetarium, theater with five-story movie screen showing two films daily and a SkyCycle suspended 15 feet in the air that teaches the principles of counterbalance and center of gravity.

If you want science that focuses more on Arizona, though, try the Arizona Museum of Natural History instead. Highlights include Dinosaur Mountain with its roaring dinosaurs and a flash food that rushes down a three-story mountain at scheduled intervals, the paleo dig pit where youngsters can search for “ancient bones” and a real territorial jail.

The largest aquarium in the Southwest, OdySea Aquarium boasts more than 2 million gallons of water and 30,000 marine animals. It also has several unique attractions including 12 sphere-shaped fish tanks suspended from the lobby ceiling, glass bathroom walls looking into the shark tank and SeaTREK, a scuba-like experience for ages 9 and up.

OdySea Aquarium is part of a 35-acre campus that includes Butterfly Wonderland, a butterfly conservatory; Dolphinarius, where you can get up close (and even in the water) with dolphins; and The Pavillions, an open-air shopping center. Nearby, you’ll find Octane Raceway, iFly Indoor Skydiving and Topgolf.

Animal lovers will love the Phoenix Zoo, one of the largest non-profit zoos in the country. More than 1,400 animals, including 30 species endangered or threatened, can be found on its five trails — the Arizona Trail, the Africa Trail, the Tropics Trail, the Discovery Trail and the African Savanna — including native animals like the Mexican grey wolf and mountain lion.

Kids can also pet goats at Harmony Farm, touch stingrays at Stingray Bay, cool off in splash ponds in warmer months, ride the Endangered Species Carousel, play in a treehouse in the Enchanted Forest and feed giraffes.

Summer is a great time to visit Phoenix. Not only do many of the resorts offer family packages and the lowest prices of the year, but local waterparks open. One of the most popular is Big Surf Waterpark, featuring a 2.5 million-gallon wave pool, water slides and a toddler area. Golfland Sunsplash and Wet ‘n’ Wild Phoenix offer similar attractions.

Some resorts have amazing water parks, too. The seven-acre Oasis Water Park at Arizona Grand Resort was voted one of the country’s top 10 water parks by Travel Channel. Great Wolf Lodge, opening later in 2019, will soon give Oasis a run for its money with its indoor water park.

The zoo is the perfect place for children to see and potentially interact with wildlife. Whether your family is filled with animal lovers or you just need a good excuse to get out and about, here are some of the country’s best zoos for your next family adventure:

The mad bobbing of sunny yellow toy ducks vying for the finish line has become a popular community event and fun family activity around the world — with many events staged to benefit local or national charities. Event-goers “adopt” a brightly colored, numbered rubber duck, pop it into a water source (usually a river or a stream) and wait to see which duck crosses the finish line first. Winners typically are awarded a prize donated by a race sponsor, while proceeds from the duck adoptions go to benefit a specific cause.