Families looking for an intimate and authentic foray into Japanese life, one that contrasts with bustling Tokyo and perennial tourism magnet Kyoto, will enjoy Hiroshima Prefecture and its hub, Hiroshima City.

While its location toward Southwestern Japan puts it a touch off the foreign visitor’s tourist track, the prefecture capital is easy to get to with Japan Rail’s Shinkansen “bullet train” from Kansai International Airport, Osaka’s less-crowded airport.

Hiroshima City’s attractions range from exquisite gardens and parks to captivating cultural touchstones, eclectic dining, shopping and entertainment. There are upscale hotels, such as Rihga Royal Hotel Hiroshima, balancing luxury, value and a great location across the street from the Hiroshima Museum of Art. In addition to family-friendly amenities and multilingual staffers, the hotel’s astute, personalized service may be harder to come by in busier cities.

The vibrant and manageable capital (population; 1,194,000) will be observing a milestone this year — the 75th anniversary of the Atomic Bombing as well as its recovery in the decades since. Its cultural epicenter and soul lies at the A-Bomb Dome, the skeletal remains of an exhibition hall near the edge of Hiroshima Peace Park. It is a profound testament not only to the unthinkable consequences of war and weaponry, but also the survivors’ determination to rebuild.

Other monuments that help tell the story are clustered nearby, including the Peace Bell (erected in 1964) and the deliberately twisted Peace Clock Tower marking the time the bomb detonated (8:15 a.m., Aug. 6, 1945). The Cenotaph, an arched tomb holding remains of the victims, frames the Flame of Peace and Memorial Pond. As the park and Hiroshima Peace Memorial Museum are major school field trip destinations for Japanese students and school groups from around the world, your teens and school-aged kids may be lucky enough to chat with their peers (with English language taught to them at an early age) about their thoughts on world peace and history.

The Hiroshima Peace Memorial Museum, remodeled and reopened in April 2019, is more appropriate for teens and adults given the graphic, but moving displays with survivor testimonies, photos and belongings left by the victims. It is an intense place, especially with the remodel’s “timeline” arrangement. The museum in its entirety puts into perspective the consequences of war as well as current events. The Children’s Peace Memorial, a poignant and more approachable site for younger kids, contains several glass cases filled with origami paper cranes in tribute to Sadako Sasaki, who started making the cranes to take her mind off her pain from the radiation-based cancer that ultimately took her life. Local school kids and visitors to this day honor her determination by making and displaying origami cranes linked together.

The Mazda Museum is not only filled with cool cars and an assembly line, but also helps tell the story of Hiroshima’s post-war recovery and economic growth. The Hiroshima Children’s Museum, meanwhile, contains a library and planetarium, two floors of interactive science activities and a maze and slide transporting kids from one floor to another. With the exception of the planetarium, the attraction is free of charge. The Hiroshima City Museum of History and Traditional Crafts in Ujinanishi Park sits in a quaint 1911 building once used by Japan’s Imperial Army as a food supply depot.

While Hiroshima’s downtown retail landscape is less flashy than Tokyo, there are many colorful spots for retail therapy interspersed with pocket-sized izakaya restaurants. 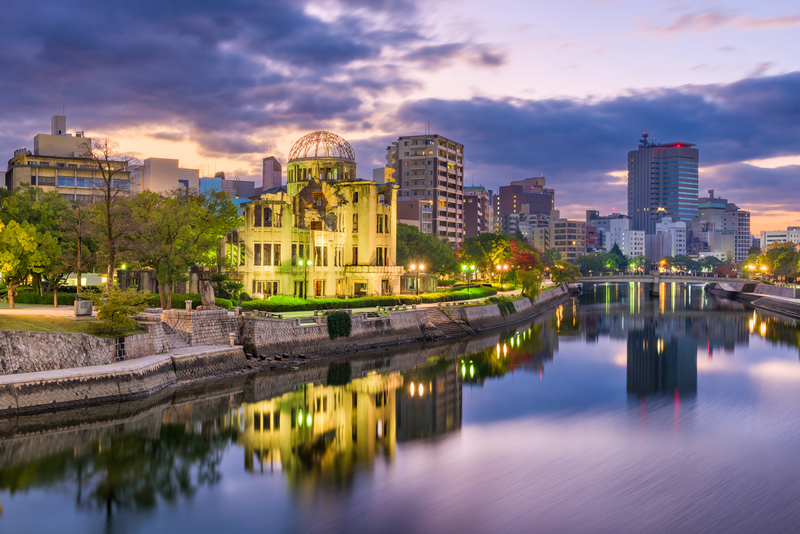 Hondori Shotengai, Hiroshima Yume Plaza and Nagasakiya are packed with Japanese clothing chains, department stores, restaurants and souvenir shops. Teens and pre-teens may gravitate toward youth-focused SUN Mall as well as manga-oriented JUMP SHOP Hiroshima and electronics emporium Sofmap Hiroshima. A few blocks away, there are gently used treasures to be found at a branch of Japanese thrift store Book-Off Super Bazaar, which boasts departments dedicated to vintage clothing and other souvenir-worthy items.

Okosta, a short walk from Hiroshima’s central train station, provides a wonderful introduction to the area’s food culture. It is not billed as a restaurant, but as a kitchen created by Otafuku, Japan’s preeminent producer of sauces topping okonomiyaki, the city’s signature comfort food. Visitors suit up in chef garb and follow the lead of an experienced instructor to craft the perfect Hiroshima-style okonomiyaki, best described — when made properly — as a hybrid of lasagna and omelet piled high with a variety of ingredients. There are menu packages with traditional ingredient combinations as well as variations for vegetarians and halal guests.

Wonderful daytrips via rental car or tour company purveyors around the prefecture abound. Kumano’s Fudenosato Kobo museum is dedicated to the art of brush making. After watching a master craftsman create a brush from scratch, visitors can participate in a calligraphy workshop or try their hand at other Japanese printing and embossing techniques. Takehara, which has a bit of a Kyoto-like feel to it, is achingly charming and is the real-life setting for the globally popular anime series Tamayura.

Onimochi, another popular setting for Japanese movies and anime, is a bike rider’s dream with guided and self-guided tours via ferry and bridge on several nearby Seto Sea islands. The Hotel Cycle, the cool base camp for outdoor fun, is a renovated warehouse converted into a bike-centric hotel with décor that doubles as bike racks. It also houses a bike rental operation, the excellent U2 Restaurant and bakery and several shops selling locally made clothing and home wares.