The LEGO Movies … Coming to Life Soon at LEGOLAND in Carlsbad, California

LEGOLAND California Resort’s big birthday year may be in the rearview mirror, but the party continues with an awesome two-acre addition, converting everything kids and grown-ups loved about The LEGO Movie and The LEGO Movie 2: The Second Part to life-sized fun.

The metropolis of the films, Bricksburg constitutes the new park-within-a-park — its most ambitious expansion to date. Emmet’s Flying Adventure, the flagship ride, takes flight on a high-tech, triple-decker flying couch, zipping around town and above Middle Zealand, Cloud Cuckoo Land, Pirates’ Cove and other dazzling spots. Elsewhere, guests can enjoy rides such as the Cloud Cuckoo Land Adventure, Benny’s Play Ship and Unikitty’s Disco Drop. Expect encounters with Emmet, Wyldstyle and other Bricksburg citizens at Emmet’s Super Suite.

“We want to bring theater to LEGOLAND California with this space, and this project is the largest expansion in the park’s history at over two acres,” said Jake Gonzales, media relations manager, LEGOLAND, whose own children are eagerly awaiting Bricksburg’s debut. “Legoland Florida has a one-acre version of this ‘land’ that served as sort of a prototype for this one. While the Florida park has one theater, the new one will have a dual theater. Florida has one Disco Drop tower, while ours has two. They have a water ride while we have a carousel, making each one worth a look.”

As this new utopia is getting some polish and pizzazz before its April 2020 opening, Gonzalez continued his behind-the-scenes look inside Bricksburg’s California outpost. He pointed out, the destination was a couple years in the making — although the project broke ground in early 2019 (LEGOLAND California ‘s anniversary year), development began in 2018, and involved relocating the Duplo area in 2019 to make space for the new “land.”

“Once guests enter the three-story, dog-faced ‘Puppy Palace,’ they will be fully immersed inside the life-sized Lego universe,” said Gonzales. “Emmet’s Flying Adventure begins at the ‘Invention Convention,’ where Emmet came up with the Flying Triple Decker Couch. It holds 12 guests, and starts with a thrilling 180-degree turn into a large domed theater with a screen made out of metal sheets. The riders get the sensation of flying around through some of the movie’s most memorable scenes using 40 different special effects. It’s a full-on sensory experience, not only with sights and sounds but also aromas such as cotton candy wafting around Unikitty’s Cuckoo Land surroundings. Later, they’ll feel a salty mist as they go past MetalBeard’s Pirate Ship.” 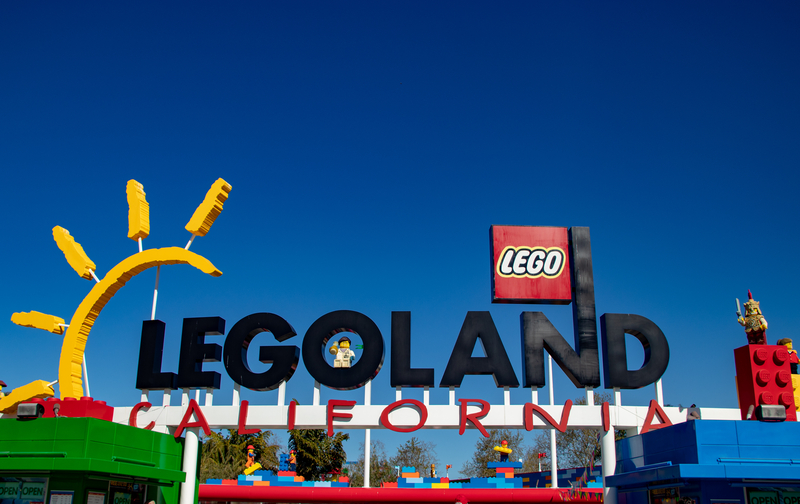 Unikitty’s Disco Drop taps into Unikitty’s constant change of emotions, which Gonzales explained is similar to a young child’s change of emotions … and the younger sister’s from the second movie. On this ride, Unikitty’s face changes based on what guests may experience while on the ride. As Benny’s all about the 1970s, his 40-foot Play Ship structure evokes the era. The attraction also features a reconstruction of Emmet’s apartment where kids can explore and enjoy his interactive surroundings, as well as do meet-and-greets with Emmet, Wyldstyle, Joe Mayhem, Rex Dangervest (Chris Pratt’s parody of his own Jurassic Park persona) and other characters. Queen Watevra Wa’Nabi, the shape shifting brick-built alien who reigns over the Systar System, appears in her many different incarnations within the carousel.

“Although several of the rides are geared for people 8 and up, and there is a minimum height of 40 inches, younger children not yet tall enough or ready for the rides can enjoy the many play areas that reflect the dual storylines of both movies,” continued Gonzalez. “Every building area encourages them to create new things inspired by the Lego universe they are a part of. Unlike other parks, our queue lines for the rides have play structures and interactive activities to keep people entertained while waiting. All of it makes it a totally inclusive family experience.”

While planning your #ComeBacktoTravel vacation, consider straying from chain hotels and book one of these or other black-owned hotels in the country.