James Luchini, training and development manager, Francis Ford Coppola Winery, has worked with Coppola for 17 years. “He’s very particular about everything he does,” Luchini told us. The winery is located in the city of Geyserville, tucked into the Alexander Valley, in the county in Sonoma. Luchini told us builders carried out everything on the property to the exact specifications detailed by Coppola’s vision.

As you climb the stone steps to walk through the iron gate into the winery, you feel as if you’ve entered a European estate. Small tasting rooms connect to halls lit up by original movie memorabilia, some glass cases holding original costumes and props from Coppola’s movie sets.

“It was Bram Stoker’s Dracula that paid for the construction of this winery,” Luchini said, pointing to an ornate robe once worn by one of the characters. Movie buffs will delight as they reminisce from The Godfather to Apocalypse Now to Tucker, with a full-sized car spinning in one of the two-storied rooms. 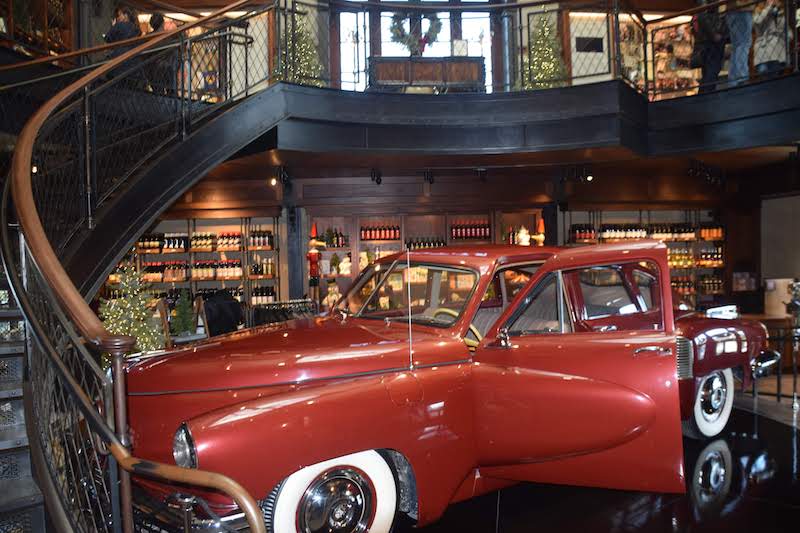 “Francis insisted that this Tucker needed to spin here and had the room constructed to allow that. It definitely presented some challenges,” Luchini confided, but it all worked out because there it was spinning away, one of only 47 existing Tucker Automobiles from the original 51. Coppola is the owner of two. 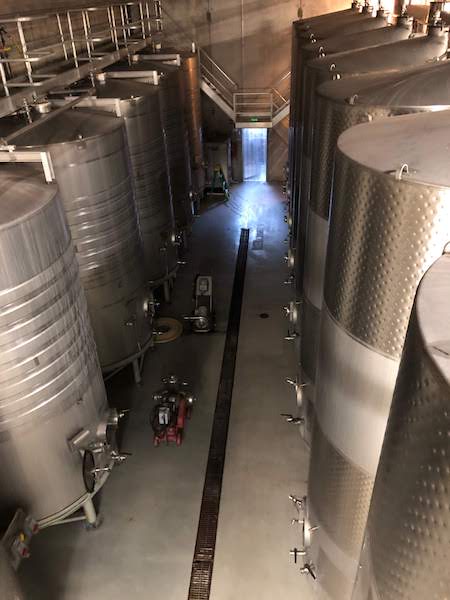 Tours come with included tastings and if you have kids, board games and puzzles are available for their amusement while you hear about the fascinating stories behind each blend. A walk through the on-site bottling production line will have you never see wine the same way again. Massive 100,000-gallon tanks are perfect for blending, Lachini told us, and there’s a computer program tracing each grape from the moment it’s picked until it’s squashed.

One of the things Coppola saw happening at his Napa winery was kids begging parents to splash around in the outside fountain. To make his winery a family-style resort, he built an H-shaped pool in the center of the compound. Kids can swim between the two sides through the middle with a canopy of water spraying overhead. Lounge chairs surround the pool and European-style cabines offer families some privacy and a shower. Rentals include four towels, reserved lounge chairs and poolside restaurant service from the pool café. The pool is open April–October and the Pavilion Shell, a replica from the one in The Godfather: Part II, hosts musicians and entertainers during those months.

Imagine having a restaurant serving all the best dishes you’ve ever eaten as you’ve traveled the world. Coppola collected an array of all his favorites, imported an authentic Argentinian grill called a parrilla and put it all in a menu at Rustic. The adults split the Marrakesh lamb, enticed by the description of how it’s prepared in Morocco, with a pile of rocks and a man sitting atop them stewing the meat for 10 hours — definitely worth the wait!

Tuesday nights used to be slow at Rustic so Coppola wanted to create a tavola, an authentic Italian family dining experience. Guests are welcomed like family and servers dress up in vintage Italian garb and act the part of your doting uncle and aunt. Food and wine are brought out as soon as guests are seated and the improved performances continue. Eat and drink as little or as much as you like and you’ll only be charged for what you consume. Not a surprise:  Tuesday nights are no longer slow and reservations are highly encouraged.

Budget Airlines: Are They Really Worth It?