For more than a month each year, the Colombian city of Medellin glows with Alumbrados Navideños, a spectacular light and water show National Geographic listed as one of the top Christmas lights shows in the world. And you don’t need to be out in the cold to enjoy it as December is mid-summer in Medellin.

Colombians and foreign visitors fill the streets, the riverside Parques del Río and Parque Norte amusement park to watch spectacular light displays and fireworks. During this annual festival of lights, sponsored by the local power company and the city government, the streets of the city come alive with strings of lights, lighted panels and holiday scenes in bright colors. Along the Medellin River, lights play in the water and the city’s fountains flow and dance in vivid color.

Businesses, neighborhoods and individuals add to the public displays. Department stores and the more than 40 shopping centers around Medellin, some built on the sides of the steep mountains surrounding the city, add their own expansive indoor and outdoor displays. Public and private buildings in the city center and on the mountainsides above are bathed in colorful lights throughout the night, some with changing colors and moving patterns of light. 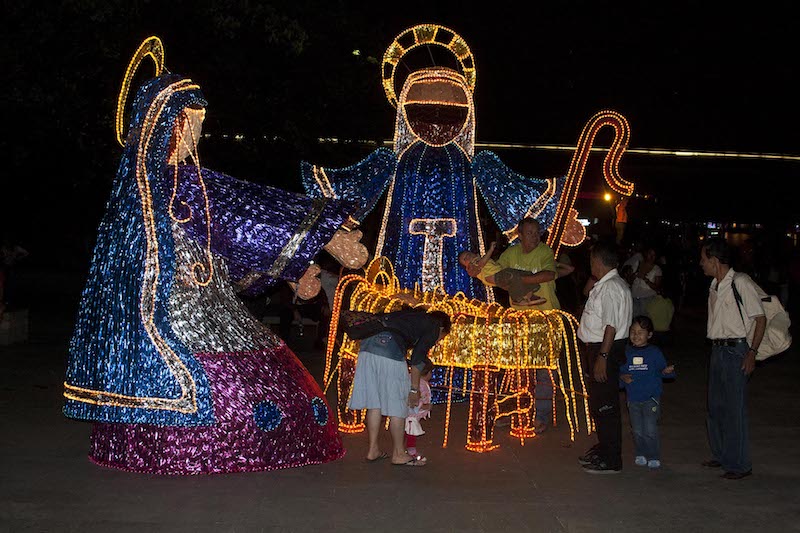 What began as a small celebration in the 1950s has now become one of the two most anticipated annual events in this community of nearly 4 million people. This year’s display has 27 million LED lights, illuminating 32,000 hand-woven figures to create towering nativity scenes, colorful birds and flowers, giant Christmas trees and dozens of Christmas-themed scenes. Entire gardens of flowers formed by colored lights line walkways; colorful projections move against the walls of buildings.

Lights seem to float along the length of the Medellin River as fountains of dancing colored waters rise above it. Avenues are covered in arches of colored light and huge Christmas scenes in brilliant colored lights line riverfront parks and the Parque Norte amusement park. Park entrance to see the lights displays is free, although you must buy tickets for any of the rides. Along the streets and in the park are vendors selling food — fresh-cooked bunuelos, arepas, roasted ears of corn, skewers of chicken and sausages of all kinds.

The official start of the Christmas lights festival is Dec. 7, but you can see the lights every night, 6 p.m. until midnight until Jan. 6.

Medellín has changed a lot since its dark cartel days of the 1980s, and its Christmas lights have been playing a significant role in this transformation, showing the world a new and hopeful city. Each year more than 4 million tourists visit Medellin during the festival, finding a beautiful, modern — and safe — city, with all the facilities and attractions a traveler hopes for. It is filled with museums, cultural events and is one of South America’s liveliest nightlife scenes.