If the glamour of old-school Hollywood is calling but the location needs to be a setting in Florida, then the Loews Miami Beach Hotel in South Beach will roll out a red carpet into the Art Deco towers that will begin your family vacation blockbuster. As you step through the doors into their polished lobby, your little mobsters trailing behind, you may feel like roving spotlights accompanied you into a reception worthy of the silver screen.

Highly polished, white marble floors with metallic accents of gold and grey lead to a three-dimensional, mineral wall art display by Chicago artist Sarah Raskey. Raskey’s out-of-this-world sculpture, created with pearls, stones and meteorites, streaks behind the front desk, made of square, white marble blocks that demonstrate the tension created by Earth and life, as cracks of gray appear to pull the stone apart.

Our views from our 11th-floor, ocean-facing, connecting rooms, perfect for the multigenerational memories we set to create, smoothed some of that tension with visions of swaying palm trees and a soundtrack of crashing waves. Straight below our balcony, the pool was a giant jigsaw puzzle piece surrounded by lounge chairs and private cabanas worthy of any A-list.

Better than Breakfast at Tiffany’s, you can start your day with a visit to the breakfast buffet at Preston’s Market, which offers a creative take on the morning culinary experience. A variety of quiches, pastries, made-to-order eggs and freshly squeezed juices will pamper your body and prepare it to be appreciated poolside.

The perfect setting to shoot that big beach hit is the private SOAK cabanas that offer guests a respite from the high-energy shenanigans of the family-friendly pool area. Each cabana comes with a private butler to attend to your palate, bring wine or cocktails and satisfy whatever need may arise. Inside, a marble bathroom, overstuffed couch and flat-screen TV are included in case you need to retreat further from your fans to practice your lines. Evian water misters are there to cool off your little ones or refresh yourself before your big scene. Once rested, you can join the adventure on the beach in front of the hotel by renting one of the kayaks, boogie boards or paddleboards included in your stay. We borrowed a kayak and took turns with the kids on the low seas. We raced each other, flipped salty water into the other’s boats and enjoyed the warm aquamarine ocean. I even got my mom into a kayak, the first she’s ever paddled! After she smiled for the camera, she was happy to cross it off a list she didn’t know she had. Once we had our action shots down, we rested with colorful cocktails in lounge chairs under umbrellas. 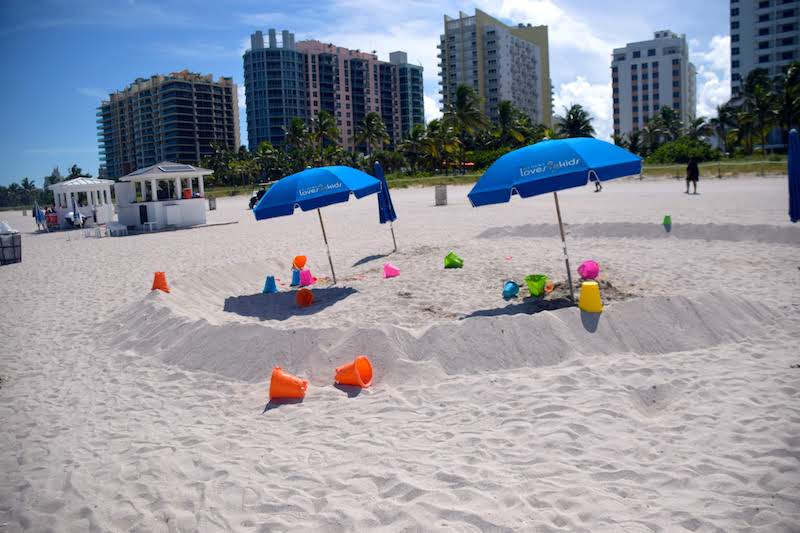 If the cabana isn’t enough of a retreat for your little ones, the SOBE kid’s club is the perfect escape for your Pippi Longstocking or Rebel Without a Cause. From the arcade to pizza-making classes to crafts, your shining stars will find their Brat Pack. Mine loved the easy access to video games and playing them with kids visiting from around the world. Instead of throwing messages into bottles or becoming pen-pals, exchanging user names is the new way to keep in touch.

Our next scene, a 30-minute car ride from Miami near Ft. Lauderdale, was a historical thriller shot at the Hillsboro Lighthouse that unfolded during the Prohibition Era. Our guide, volunteer president of the Hillsboro Lighthouse Preservation Society, Ken Herman, told us the steamy story. The Knight family had a long lineage of men becoming lightkeepers in Broward County, where the Hillsboro Lighthouse still stands. But 13-year-old Eugene Theodore Knight had dreams of sailing, so he ran away to learn how. While gone for 35 years, his younger brother, Thomas, took the family reins and became lighthouse keeper. When Theodore returned, now as Captain Theodore Knight, it was during the Prohibition. He immediately got involved in smuggling booze from nearby Bermuda and bought a restaurant he and his wife, Lola, turned into a supper club and gambling hall called Cap’s Place. “His brother, Thomas, changed the speed of the rotating light to alert Cap if there were Feds in the area,” Herman told us. “That way, they were never caught.”

A short drive away, the only entrance to Cap’s Place Island Restaurant is through a dock to which guests must ferry. As my two boys entered the boat, the sun drifting into the ocean and a marine layer slowly wrapping it’s way around the small islands, it wasn’t hard to imagine them as the outlaw brothers that had colored the area for all those years. I’m sure the Knight brothers had spent a good chunk of their childhood trying to kill each other also. It probably prepared them for their criminal success. Inside, pictures of dignitaries, mobsters and movie stars that had also eaten at Cap’s adorned the walls in dime store frames. The casual interior with its battered wooden floorboards, red vinyl tablecloths and cafeteria chairs is largely preserved from the days Cap and Lola operated it with their partners, Al and Patricia Hasis. In fact, the dining room where we ate was once the crushed red velvet-carpeted gambling hall. It is the oldest restaurant in Broward County and the night we dined, Talle Hasis, daughter of Al and Patricia, was running the show. Our waitress, Melissa, shared the real reason she’d worked there for seven years was for the two free boat rides. Then she walked us around the restaurant and showed us all the old hidden passages. I could see the boys plotting. Dinner started with a warm, aromatic basket of bread. As butter melted between the folds of dough, I could only think what a carb-worthy experience we were having. Forget that Hollywood diet! Every plate that followed was filled with the freshest, most delicately prepared to its best possible flavor, fish we’d had in a long time. The standards hadn’t slipped over the years which explained why without the enticement of gambling and illicit alcohol, it was still open. 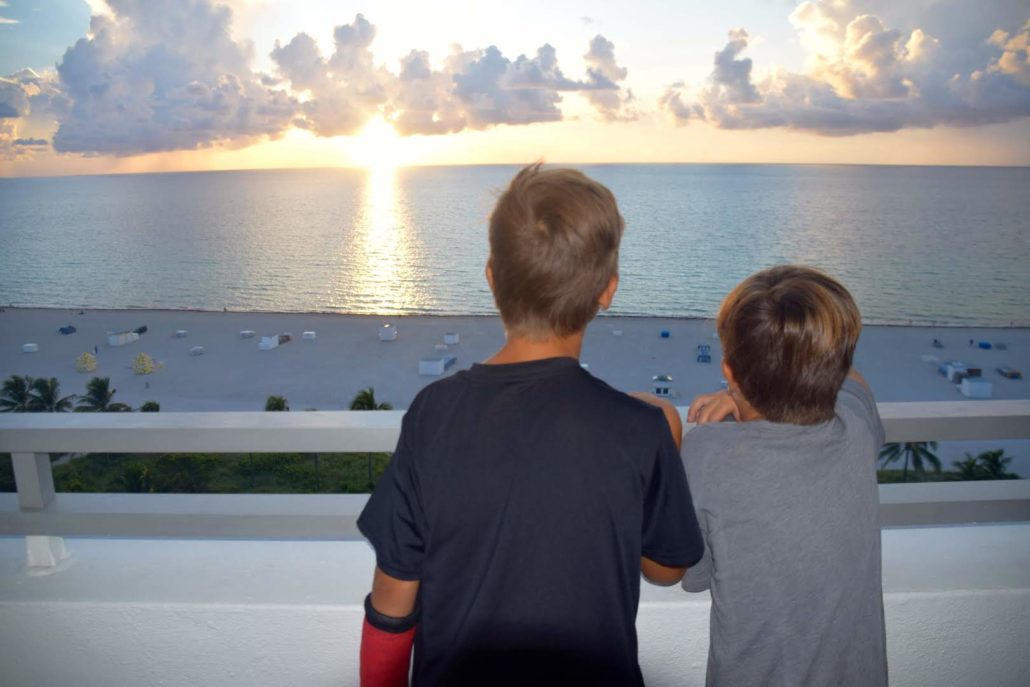 The next day, we sought to balance our script with a little levity and sweetness, so we set out to look for Shirley Temple on her good ship lollipop. When we couldn’t find it, we settled on making our own lollipops at Spun Candy. Normally the boy’s sugar intake is subject to strict quality control, but on vacations, we allow a little wiggle room, for both our clothes and our rules! Spun Candy is a candy shop originating out of London and its new storefront in Miami is the start of its British invasion in the United States. Candy artists Valentina and Khrystal led us on a flurry of candy making that included boiling sugar water and food coloring, emptying out the pot, after it thickened a bit, onto a solid metal table with a warming mechanism that allowed the candymakers (us!) to shape and mold our creations into round swirly, multicolored pops, ducks, lips and a heart. They offer classes to teach anyone how to do it and use only the best ingredients. It’s the perfect, original souvenir to bring to loved ones and they can take a picture of your creation before they gobble it up.

Wanting to experience a little family-friendly nightlife, we opted to don our little black dress and clean shirts at Mira Five Star, which had an extensive wine list, live piano music and a good balance between surf and turf. There were many vegetarian options and you could even indulge your inner European with a variety of caviar. If our kids were older, we would have followed our swanky dinner with a jaunt to the Wynwood Art Walk which happens every second Saturday and involves cutting-edge artists displaying their creations, food trucks and craft spirits and beers. But alas, something to look forward to.

Our movie ended with a deep dive into the unknown of the Frost Museum of Science. Normally you can’t drag my boys into a museum but this time I had to beg them to come out. We only had about an hour but could have spent several of those happily interacting with the birds in the apiary, observing all three levels of the aquarium, sticking our heads into the shark simulator virtual reality mask, dancing in the dark with streaming lights or any of the super interactive, unusual exhibits that kept my boys begging for another minute. And how can you have a happier ending than your kids pleading to know more about a place different from their own? When you set out to create that perfect family drama, providing your children a variety of roles to try out might help them find their perfect fit, in Miami, in Hollywood, in everything.