Albuquerque is surprisingly family-friendly, especially when it comes to museums. In addition to a science center and natural history museum, New Mexico’s largest city has several memorable museums your kids will talk about for years to come.

Kids of all ages will love the “Balloon School” exhibit, where they can step inside an actual gondola and try their skills virtually guiding a balloon to a targeted landing site, as well as films shown in the Tim Anderson 4-D Theater. Young children, ages 0 to 6, can participate in Story Time on Wednesday mornings. 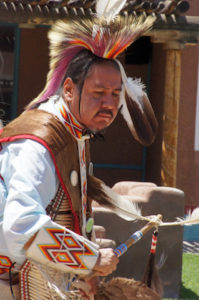 If you want to learn about the history and culture of New Mexico’s 19 Pueblos (Native American tribes), the Indian Pueblo Culture Center is the place to go. Although it’s filled with artifacts and art, including Puebloan pottery and baskets, much of the museum is geared to the local grade schoolers who come on field trips. There’s also an area for younger children to read books.

Plan to visit on Saturday or Sunday when Native American dancers perform, typically interacting with the audience as they do. (Check the online schedule for times.) While at the museum, sample modern twists on Native American foods at its restaurant and maybe even purchase something from the craftsmen selling their goods onsite.

This Smithsonian-affiliated museum covers all things nuclear, from atomic theory to the development of atomic weapons, Hiroshima and the Cold War, as well as nuclear medicine and other applications. Don’t worry it will be over your kids’ heads (or yours). Exhibits masterfully explain scientific concepts, and interactive and hands-on activities keep kids engaged.

Also part of the museum, the nine-acre outdoor Heritage Park displays a mix of planes, rockets, missiles and cannons. Highlights include a B-29 Superfortress with Fat Man Bomb Casing and Transport Container, Trinity Tower Replica, F-16 Fighting Falcon and a nuclear sub sail.

Most cities have a science center, children’s museum or both, but Explora combines them under one roof. Kids can experiment with gravity, water, light, color, electrical currents and more. Or, they can get creative, making art from recycled materials or sketching a character for an animated film. The brave can even take a high-wire bicycle ride.

If you have toddlers, come early on Monday. From 9–11 a.m., the museum admits only young children and their adult companions and offers special activities like Story Time and Music Jams.

A trip to Albuquerque wouldn’t be complete for dinosaur fans without a visit to the New Mexico Museum of Natural History and Science. There, they’ll see Stan, the second-largest tyrannosaurus rex ever found, plus an impressive collection of other pre-historic creatures.

Young astronomers can marvel at the stars in the Hall of Stars or during a planetarium show while other curious minds will be intrigued by New Mexico’s natural wonders in the Naturalist Center.