Music, Hotels and Restaurants in Havana

Music is the heartbeat of Havana, where Afro-Cuban rhythms, rumba, salsa and choruses of “Guantanamera” are heard at breakfast buffets, cafés, restaurants, bars and nightclubs. In April 2015, when I was there, two newly made friends on the trip and I went to hear live music each night. I was thrilled with my second chance to see the still-glamorous musical revue at La Tropicana, where showgirls wear skimpy, glittery costumes adorned by towering headpieces and each of the musical acts showcases talented and rhythmic presentations. We delighted at Grammy-nominated Cuban jazz pianist Roberto Fonseca’s performance at the Habana Café, where tables surround a 1950s’ Chevy Pontiac and a Buick, and at a performance of the Buena Vista Social Club. (One site claims it’s a tourist trap; so be it. This tourist loved it!)

We attended wonderful private performances of musicians and dancers, even of young circus performers. The children did daring stunts from a too-high platform above a cement floor in a non-air-conditioned school building. They were impressive (and pleased with gifts we all brought, including paper, pencils and notebooks). 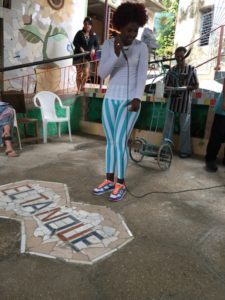 Ernest Hemingway’s legacy in Cuba looms large and we were among the many tourists who visited Finca Vigia, Ernest Hemingway’s home. It’s on a lush, five-acre estate, about 10 miles outside the city, which he bought in 1940 for $12,500. The author lived and worked there until 1960 and wrote For Whom the Bell Tolls, The Old Man and the Sea and A Moveable Feast in Cuba. Visitors can’t enter the house, but can see his furnishings, books and accessories, even a ceramic by Picasso, through open doors. (The Finca Vigia Foundation, an American non-profit, is devoted to trying to preserve this home and collection.) 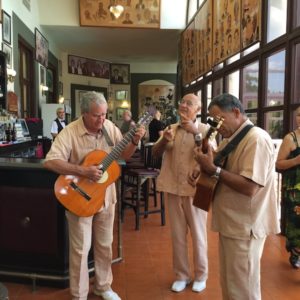 We also stopped in for drinks at Hemingway hangouts — the Bar Floridita and La Bodeguita del Medio. And, we were taken to tour The Hotel La Saratoga, a Neoclassic building c. 1879 which was transformed into a swank boutique hotel. We also visited the Hotel Nacional de Cuba —  Havana’s elegant Spanish colonial Grande Dame from the 1930s. It is a historic seafront national monument, where the bar was jumping with live music, but house guests complained of no hot water. (The newer and more contemporary IberoStar Parque Central has better infrastructure, though it lacks the old-world charm.)

We stayed at the comfortable Meliá Cohiba, a 4-star high-rise facing the five-mile esplanade and sea wall called the Malecón — that links the harbor in Old Havana to residential Vedado. (A rainstorm caused elevators to stop and, in my room, the ceiling and windows leaked. According to the next day’s news: Roofs had collapsed and people were injured.)

And, we ate well in a few of more than 400 paladares, the privately owned restaurants Raul Castro — Fidel’s brother and First Secretary of the Communist Party in Cuba — permitted entrepreneurs to operate in their own homes since 2010. (I believe those who said they are far superior to the state-run restaurants.) The venues were in decorated apartments, spiffy houses and such; sometimes we dined amidst family treasures, sometimes with mismatched china. The chefs were as creative as they could be considering the limitations of fresh ingredients at local markets. Zucchini was the vegetable of our week and served at most every meal.

At Elite, a chic apartment-café atop a Mid-Century apartment house — with a sleek black-and-white-striped foyer, white stucco dining rooms and a white awning-topped terrace — we were served Chef Yudel’s carpaccio-like slices of ceviche, fried plantains, sea bass and chocolate cake. We walked under a flowering pergola to the entrance to Moralejo. The farmhouse Restaurant DiVino showcased the perfect tomato from its homegrown, organic garden (there are no chemical fertilizers in Cuba). And the host’s personal fleet of old cars transported us to dinner at La California. The following restaurants — which I did not experience — were also recommended: Doña Eutimia, in a former 200-year-old monastery, gets rave reviews for hospitality and traditional Cuban fare; plus, El Cocinero, Café Laurent, La Guarida and El Litoral. 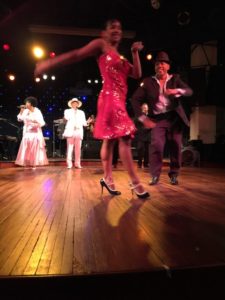 My music-loving friends and I hired a concierge-recommended driver to take us to and from dinner and La Tropicana for the one evening we were on our own. He also recommended eating at Atelier, where New York State Governor Andrew Cuomo and his entourage dined the previous week. We each ordered Chef Enrique’s garlicky grilled shrimp with rice and beans, within his art-filled, upper floor space in a lovely mansion. So much was untouched, I asked the waiter (in Spanish) if I could bring the leftovers to the chofer and he agreed. The driver was overwhelmed with the dish and showed me his ration book, with its easy to read meager month’s allotment: five pounds rice, beans, eight ounces olive oil and a half chicken; no fruit and vegetables and milk only until age 7. No wonder the shrimp was a treat!

What I experienced in Havana was a city where the vibrant culture is more stable than its structures, and its residents are more noble than its policies. 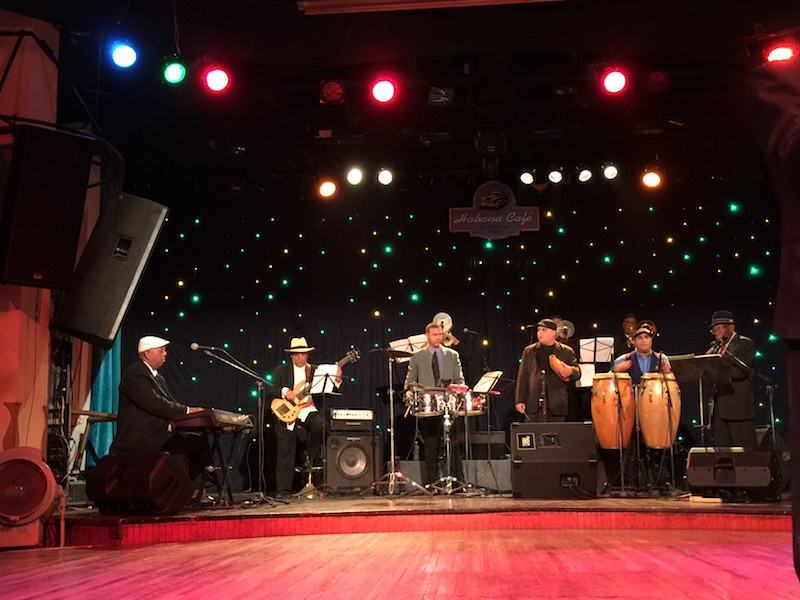 Although travel is on the rise, some people may still not feel comfortable getting on an airplane and being in a small space, so they are hitting the road! Rental car company Hertz recently surveyed more than 1,500 Americans to determine how and when they plan to embark on their next vacation.

Apple Podcasts Subscriptions launched this month as a global marketplace for listeners to discover premium subscriptions alongside millions of free shows on Apple Podcasts. The new subscription is perfectly timed for families planning summer vacations. And whether your family trips will take place by air, land or sea, kids will be looking for something to do as they await arrival to their vacation destination.

Bring Dad to Norfolk for Beer This Father’s Day

Father’s Day and breweries go hand in hand. Pack up the car and head out for a road trip, brewery-laden weekend getaway in Norfolk, Virginia, especially in the walkable Chelsea neighborhood.

Celebrate Father’s Day in Mexico this year at Grand Velas Los Cabos. The luxury resort has a variety of tequila-themed amenities and services for the father in your life.