Row Your Boat to Assembly Square

© The Row Hotel at Assembly Row

Abe Lincoln said you can’t please all the people all the time … but the Row Hotel at Assembly Row comes pretty close. Contemporary and cool, this new hotel at Assembly Square Marketplace just outside of Boston in Somerville makes an ideal couples getaway or a fun school week break escape with plenty of fun features for all.

Start with convenience. Just off of Interstate 93, it’s a quick zip from most of Massachusetts and thanks to a newish Orange Line stop on the train line, it’s more convenient to get into Beantown’s center than many other locations in the city proper. Pretty soon it will even be a feeder hotel for the soon-to-open Wynn Encore Boston Harbor casino and entertainment complex in nearby Everett, with a convenient walkway and water taxi shuttle. But for now, it’s prime for a staycation. 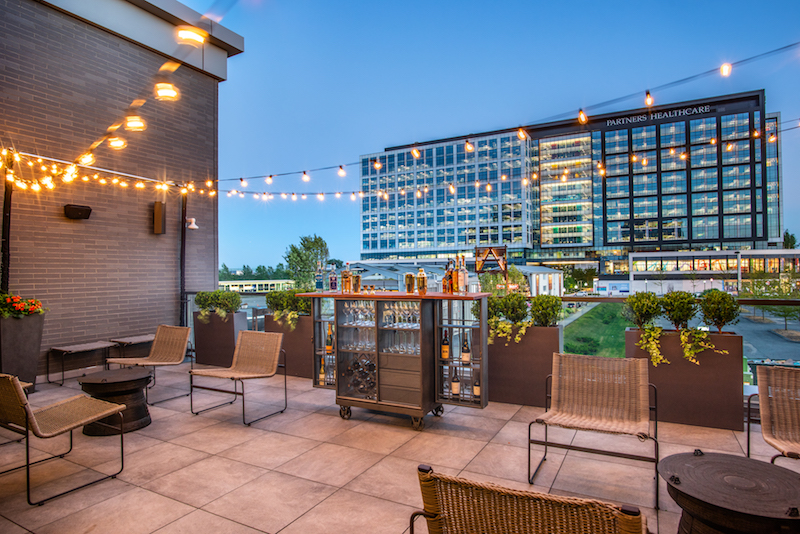 The swimming pool makes it a year-round destination, its waters overlooking what used to be a Ford assembly plant a century ago (hence the shopping center’s name and some of the hotel’s tasteful cog-and-wheel decor). The complex has been revitalized with aplomb and the scene is just as hot as what’s splishing and splashing. The “depths” only hit 3-foot, 6-inches so parents have little to fear and can chill out on one of the wicker basket loungers that’s more Vegas than New England. If your liquid of choice is more gin than chlorinated water, hit up the sexy lobby bar downstairs and admire the foot traffic and soaring spiral staircase that leads to a central function space on the second floor. Mostly blacks, grays, mirrored and muted surfaces with tasteful patina, the Row has a lot more personality than the cream and muted tones of most new hotels; the vibe is still relaxed, however, especially in Reflections. The dining space serves up breakfast, lunch and dinner, with steaming piles of pancakes for the kiddoes, along with some fun takes on favorites like poached eggs and potatoes with roasted red pepper sauce for Sunday brunch. 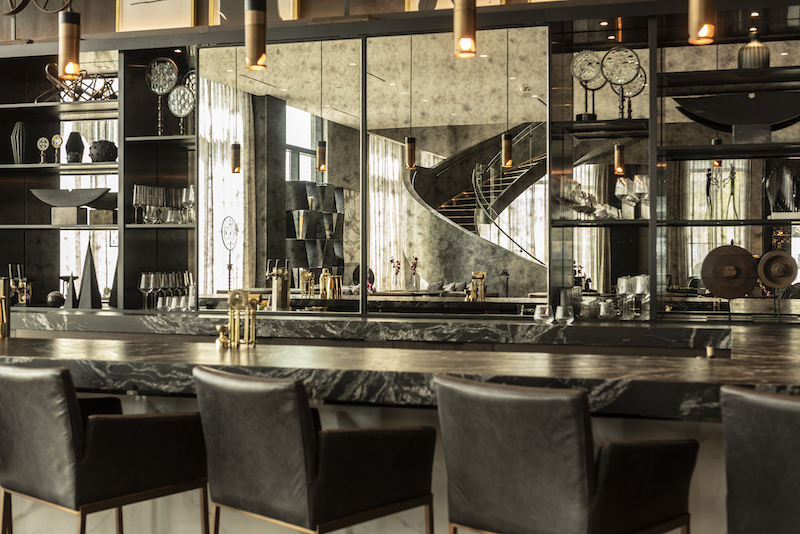 There’s certainly no shortage of dining options, however, for all price points and palates. Adults can have drinks and apps at outdoor hot spot River Bar or go where singles mingle at Earls. One of the coolest new options is American Brewhouse, where in addition to flights and craft brews, there’s a kids menu with favorites like burgers and dogs. Want to play with your food? Lucky Strike Lanes offers up 36,000 square feet of fun with a shuffleboard at center court, bowling lanes and For the Win — a section with 130 games with classics like Down the Clown to Sega “Showdown” racing. Ages under 21 are welcome until 8 p.m., but not to worry — there’s plenty else to chase the night away entertainment-wise. 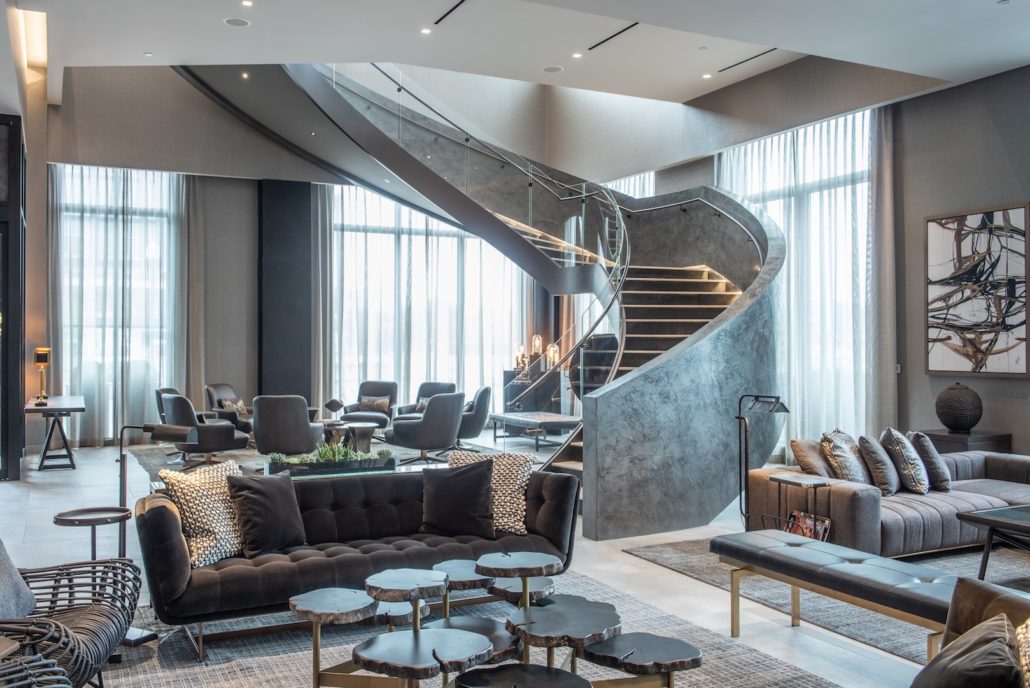 Grab a dessert — hot chocolate at J.P. Licks ice cream shop is a highlight and it’s been named Boston’s best several times by publications including The Boston Herald. There’s also Mike’s Pastry, the third and newest outpost of Boston’s beloved Little Italy Italian bakery. If your teeth ache just thinking about so many sweets, try salty with some movie popcorn at AMC Assembly Row 12 where there’s almost always at least one kid option, and convenient reserve-in-advance seating. Just next door is the Shangri-La of toy stores: Legoland Discovery Center. There’s Boston in miniature, along with a 4D cinema, laser ride, Lego City Play Zone and more. For adults, the third Wednesday of the month is also kid free at night for a unique and playful date night.

It’s not a yellow brick road you’ll follow to get here, per se, but the giant giraffe beacon formed out of cubes at the heart of the Assembly complex is just as amazing no matter what age you are. 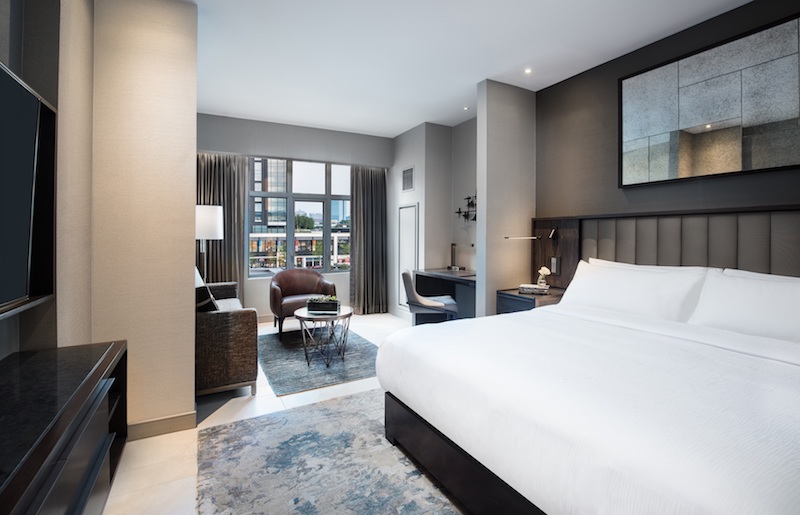 The Row Guestroom © The Row Hotel at Assembly Row

Although travel is on the rise, some people may still not feel comfortable getting on an airplane and being in a small space, so they are hitting the road! Rental car company Hertz recently surveyed more than 1,500 Americans to determine how and when they plan to embark on their next vacation.

Apple Podcasts Subscriptions launched this month as a global marketplace for listeners to discover premium subscriptions alongside millions of free shows on Apple Podcasts. The new subscription is perfectly timed for families planning summer vacations. And whether your family trips will take place by air, land or sea, kids will be looking for something to do as they await arrival to their vacation destination.

Celebrate Father’s Day in Mexico this year at Grand Velas Los Cabos. The luxury resort has a variety of tequila-themed amenities and services for the father in your life.

Americans are ready to hit the road this summer. AAA Travel predicts a significant rebound in Memorial Day Weekend travel, with more than 37 million travelers expected to travel 50 miles or more from home. This number marks a 60 percent increase over 2020, when only 23 million Americans traveled. The holiday weekend is considered May 27–31.