What child doesn’t love castles — especially ones they can explore or even sleep overnight in? Here are five in Germany’s beautiful Black Forest region, in the southwest corner bordering France and Switzerland. You’ll find a lot more to do during your family travel in the Black Forest, from strolling through fairy-tale timber-frame villages to eating the famous Black Forest cherry cake.

Hohenzollern Castle
Still the seat of the Prussian royal family, who own it today, Hohenzollern Castle dates back to the 11th century. Over the centuries, the castle was destroyed and rebuilt several times, the last rebuilding taking place in 1867, resulting in a glorious Gothic fantasy of pointed towers and stone walls poised on a hilltop overlooking the fields and woodlands of the Black Forest. Kids will love the knightly armor and dazzling jewels in the treasury. In December, a Christmas market is held in its courtyard and great hall. 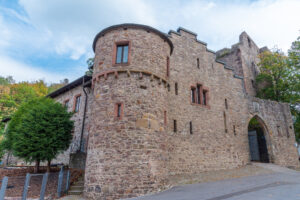 Hohenbaden Castle
The highest of three castles overlooking Baden-Baden, the medieval Hohenbaden Castle survives in two parts. The upper part is from the 12th century, while the lower “new” part was added in the 14th. In this Gothic lower castle lies the Knight’s Hall, where kids will be fascinated by the giant 120-string wind harp that is activated by breezes. You can explore this romantic ruin, see the dungeon and climb the towers for views of the Rhine Valley and mountains of the Black Forest.

Hochburg Castle
Demonstrating more than 500 years of military architecture, Hochburg Castle will wow kids by its awe-inspiring size. Approaching it, you can appreciate its defensive position, rising on a hilltop in a series of walled terraces, any one of which would have been difficult for an invading army to take. But even the seven star-shaped bastions added to the fortress in the 17th century weren’t enough to keep it from being destroyed, and it stands today in magnificent ruins you can explore for free. 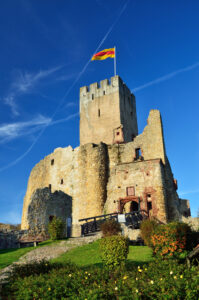 Rötteln Castle
In the far south of the Black Forest, almost at the Swiss border, Rötteln Castle ruins span more than the length of three football fields, giving kids a lot to explore. A drawbridge takes you from the lower ward to the oldest part of the castle, and there are two tall keeps, an outer bailey, a defensive tower and the upper castle, as well as a museum and good historical information for the curious. The best views, reaching all the way to the snow-covered Alps, are from Grüner Turm (green tower) in the upper ward.

The four battlement towers of Ortenberg Castle stand on a hillside just below the remaining tower of a medieval castle, largely destroyed in 17th-century wars. The newer one, however, built in the 1900s, may be your kids’ favorite. The castle is now a youth hostel, with budget-pleasing rooms and a barbecue area in the rose garden where you can grill some of those delicious German sausages for dinner. The cute Black Forest village of half-timbered houses is also a short walk away with several choices of restaurants.