From close encounters with camels to viewing wildlife on a desert safari, Abu Dhabi offers families plenty of opportunities to see and interact with animals. These four attractions will thrill animal lovers of all ages on a visit to the capital city of the United Arab Emirates.

The first and largest veterinary hospital dedicated to falcons in the world, the Abu Dhabi Falcon Hospital offers guided family-friendly tours of its facility. Tours begin with information about falcons and falconry and continue in the outpatient room, where you’ll see hooded falcons waiting their turn for scheduled procedures. 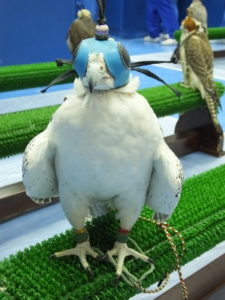 After dividing into smaller groups, you’ll gather around an examination table to watch as a veterinarian anesthetizes a falcon, trims its nails and sharpen its beak. Kids (and adults, too) can touch the unconscious bird and, later, pose with an alert falcon. One lucky person on the tour will even have the opportunity to feed a falcon. The tour ends with a visit to the free flight area and the hospital’s small museum.

Located on Sir Bani Yas Island, south of Abu Dhabi, the Arabian Wildlife Park is home to more than 10,000 free roaming animals, including Arabian Oryx, giraffes, gazelles, hyenas, cheetahs and ostriches. To see them, though, you’ll have to book a room at either Desert Islands Resort & Spa by Anantara or Danat Resort Jebel Dhanna.

Both resorts offer desert safari packages with an expert guide who will drive you across the island’s sandy interior in an open-top 4×4 vehicle. Bring your camera for family photos at the giraffe feeding platform and wildlife encounters along the way. Kids on the Desert Islands safari receive an animal checklist to keep track of the animals they spy.

The first designated reserve in the UAE, the Al Wathba Wetland Reserve southeast of Abu Dhabi boasts more than 250 migratory birds, 11 mammals, 10 reptiles and 37 plant species. Grab a field guide at the visitor center before heading out on one of two self-guided trails where, along the way, you might see black winged stilts, a red fox, several varieties of lizards, an Ethiopian hedgehog or flamingos.

Flamingos are the real draw to this mix of salt flats, fossilized sand and wetlands, though. As many as 4,000 flamingos populate the reserve from autumn to spring. The rest of the year, a smaller band calls the Al Wathba home. Bring your own water, and after viewing the flamingos, head to nearby Al Wathba Camel Race Track to watch the camel races. Admission to both the reserve and race track is free.

Once a stop on the caravan route between Oman and the Gulf, the city of Al Ain is famous for its camel souk (market). Part of the Al Ain Central Market, the camel souk is located about five miles south of Al Ain behind the Bawadi Mall. Come early in the morning to watch traders haggling over camels as well as goats and other animals. The remainder of the day, you can view the penned camels and pose for pictures with them.

Beware, though. Although visiting the camel souk is free of charge, some traders will demand payment for photographs (10–20 dirhams or $2–5 is a fair price) while others offer tours for a fee. Women ages 13 and up should dress conservatively: no short shorts, sleeveless tops or revealing clothing.

It’s time to start dreaming of your next family trip. Here’s some destination inspiration for you. Take a visual journey through Annapolis, Maryland, with us.