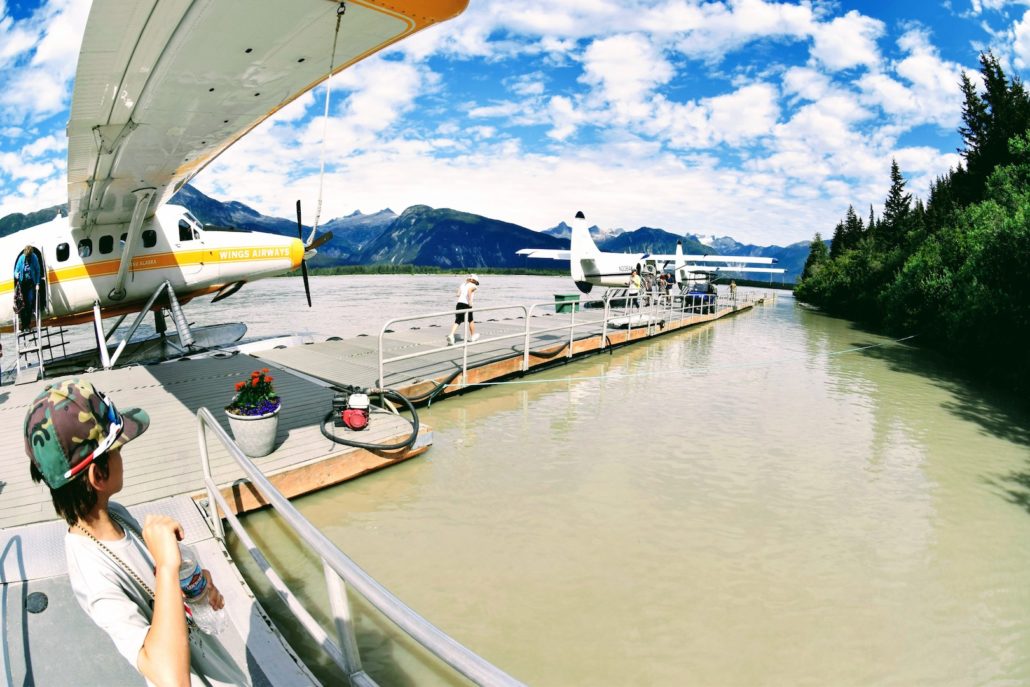 There are 190 miles of roads compared to 250 miles of hiking trails within Juneau. There is more wildlife than people, says the visitor website. So there is more to do than time to do it. The most Alaskan thing we did during our visit was our seaplane ride with Wings Airways to Taku Glacier Lodge. If you’re only going to do one thing, this is the thing to do. 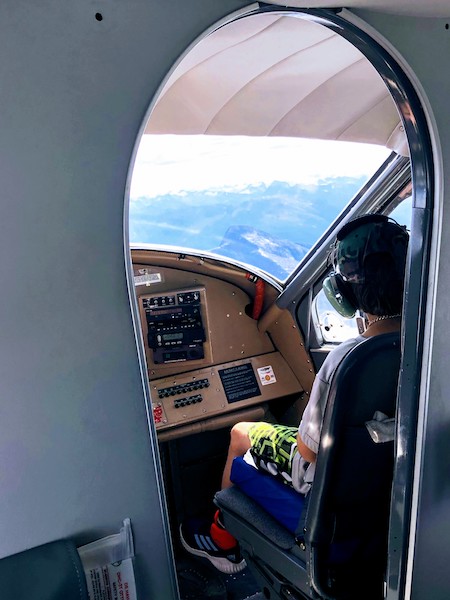 Although I love flying, I got a little nervous when we got into the small plane and even more so when the captain offered one of my sons the co-pilot’s seat upfront. But it was the softest landing and take-off I’ve ever experienced and the visuals from our windows rivaled those in documentaries.

We flew over the Juneau Icefield, the fifth-largest in North America and the birthplace of 38 major glaciers, including Mendenhall Glacier. Outside our window, rivers of blue and white ice snaked their way between white-peaked mountains. Emerald lakes, cloudy with silt, and hills split by snow moved slowly past.

Everyone had their own private viewing area and a pair of headphones narrated the entire journey as it was too loud inside for anyone to talk. We landed on Taku River and walked up to the log lodge. After getting the lowdown about our three-hour visit, we walked on a trail through Old Growth Forest to see contortionist trees, some with mushroom-like growths and others with what looked like moss-covered animal heads growing out of their trunks. 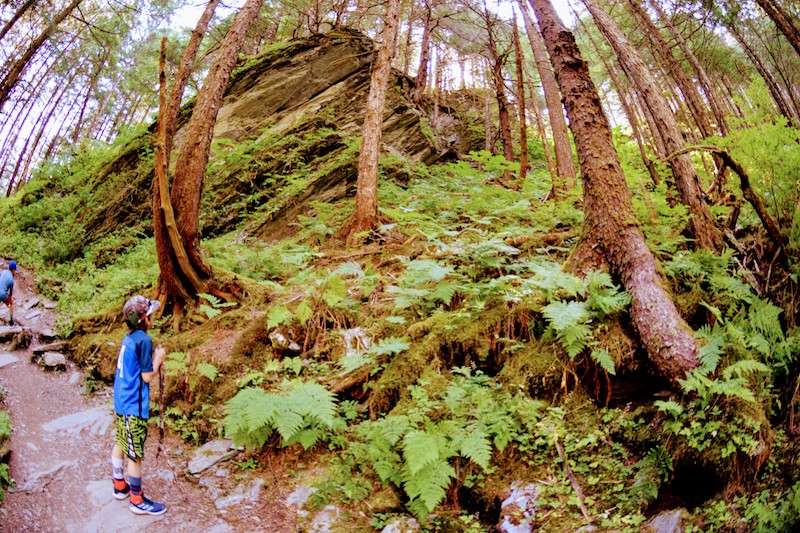 The rainforest vibrated with life as we hiked the easy trail by Taku Glacier, a tidewater glacier that spilled into the green strip of water. Our guide told us to always be on the lookout for bears and everywhere we went during our visit to Alaska, the person in charge always carried bear spray. We didn’t see a bear, though, until lunch. The smell of barbequing salmon brought out a hungry black bear. Even though this could be an anxiety-provoking situation, we didn’t feel threatened and calmly viewed the bear as it gazed longingly at the cooking fish. Eventually, the cook retreated with the stick he had earlier shown our visitor and the bear ambled toward the pit to clean up the fish remains. 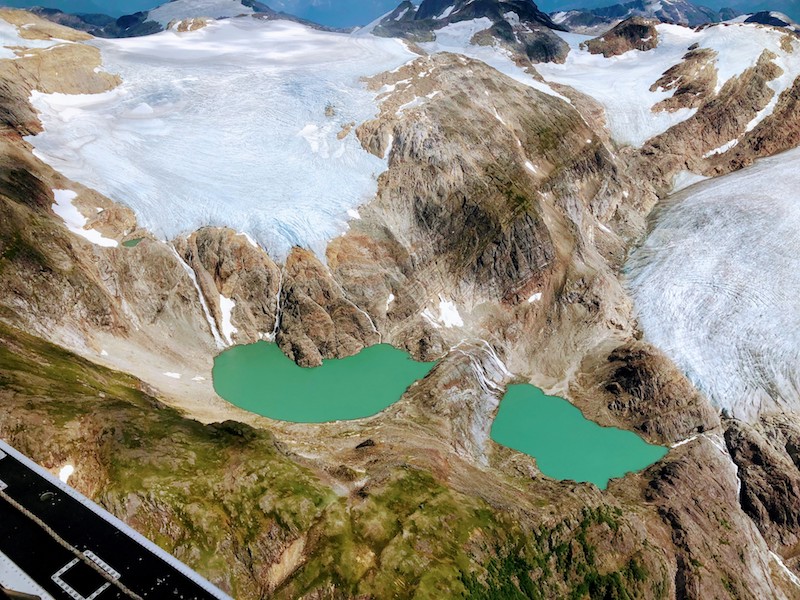 After this, I really wanted the boys to see the dog mushing camps and drive a dog sled. These dogs compete in races like the Iditarod across thousands of miles of snow and ice. This is a popular tourist activity and I didn’t plan ahead, however Kris, from Keli’s Concierge and Tours, managed to find us four spots in the Sled Dog Discovery Tour through Alaska Excursions. The musher summer camp is located on nearby Douglas Island and the guests get to train the dogs by letting them pull the wheeled sleds. The best part was playing with the pups afterwards and knowing we were supporting this dedicated community. 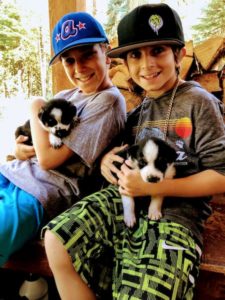 Meanwhile, back in Juneau, on our last day, we took a cab to the trailhead of the Mount Roberts Trail. It’s two miles up, on a switch-back dirt path, with occasional wood steps to make the climb easier, that leads to Mountain House. Someone told us it would take about a half hour. They lied. About two hours later, we ascended to vivid totem poles marking the entrance of the cultural center and the tramway. If you spend more than $10 in the restaurant, Timberline Bar & Grill or gift shop, you can take the tram down for free. There is a free talk and a short movie, held regularly in the Chilkat Theater, that teaches about the Tlingit tribe. The talk tells the story of Tlingit Chief Kowee, chief of one of three indigenous tribes that lived in the area when, in 1880, he led two Western prospectors, Richard Harris and Joe Juneau, to the mouth of Gold Creek and the first gold strike in Alaska. We didn’t hear much about the other two tribes, the Haida and the Tsimshian, during our visit. I’m sure it had something to do with the gold thing.

Fun fact: Originally called Harrisburg, legend has it the night before the vote to decide whether the town should keep the name or change it to Juneau, Joe Juneau bought rounds of drinks, maybe at the Red Dog Saloon. 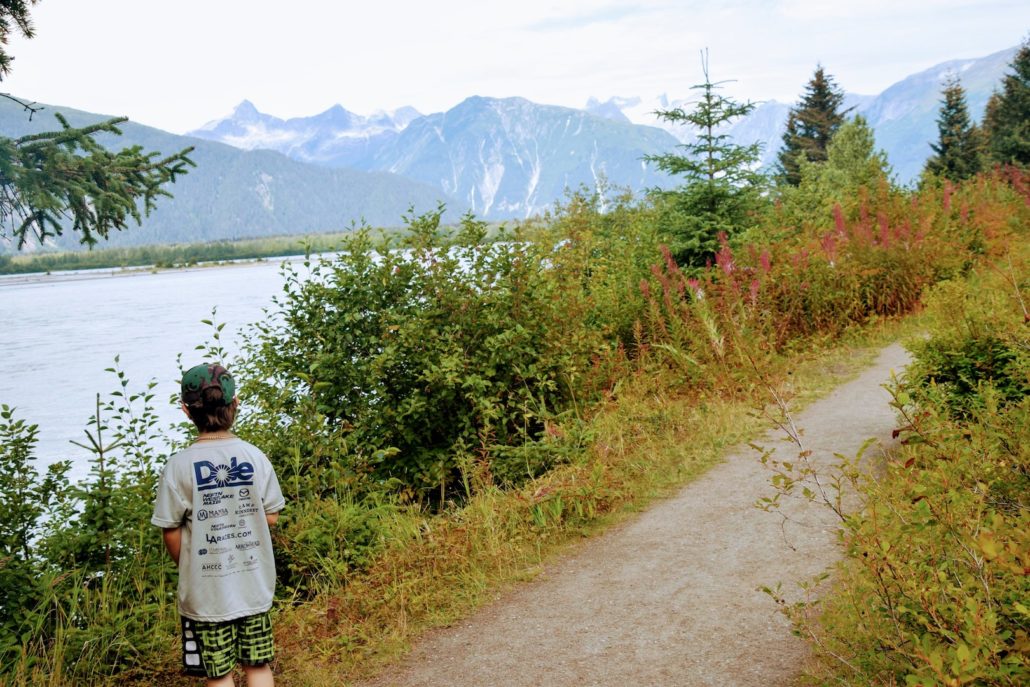 We didn’t get a chance to do it, but you can even hike to Mendenhall Glacier. It’s only 12 miles outside of Juneau.

Although the town is filled with shops that have unique items and others with things your kids will love, there are places like the Sealaska Heritage Store that sell the surprisingly affordable art of the three Northwest Alaska tribes to help support their sustainability. The beauty of the land inspired the Tlingits, some of the most prolific artists in Native American history. Also, don’t miss Trickster Company, a shop run by local artists dedicated to the Coastal Northwestern myth of Raven who brought light to the world through his trickery.

Finally, the city just renovated the Alaska State Museum which includes a gift shop. The museum is not big but it’s graceful and artistic with warm sections of wood walls, large display cases and a composite of materials that represent a walk through Juneau history. There’s even a giant ship for kids to climb in the center play area. Here, the story of the land, after all the shaking and moving, is represented by the possessions and writing of the people that left it. It’s a great place to start or end your journey through Juneau.