Food for Thought in Portland, Maine

“I wish this was our bedroom.” So said my husband after settling into The Francis after a quick 1.5-hour drive to Portland, Maine, from Boston. It would have been longer on the road in the summer, but hey, there are benefits to taking daytrips to seaside towns during the offseason. For one, there’s more time to pay attention to the small details: the incredible light streaming through three angled windows in our third-floor bedroom for the night; the beautiful woodwork detail in the lobby area on the floor and colorful tiled panels near the first-floor fireplace; the calming blue ocean hues casting a mood throughout myriad corners at this 15-room boutique hotel, thanks to local artist Kerrin Parkinson. In fact, The Francis rotates in the work of local painters and photographers every few months. We’ve already got our afternoon planned to the Portland Museum of Art, home to a temporary exhibit of Caribbean artists (who can’t use a bit of the jet stream to warm up a chilly New England afternoon?), and where we can admire household names like Renoir and Picasso. 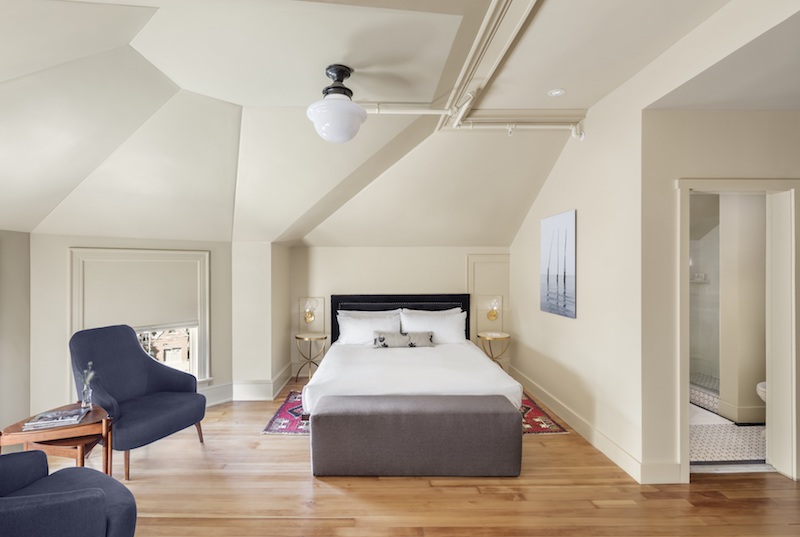 As for our own household — a high-maintenance Victorian that needs more than a little elbow grease — we’re charmed by the attention to detail at this 1881 historic home in Portland’s West End, just a couple of blocks away from summertime’s bustling downtown. Can we put dormers into our third floor to get this much space? Where can we buy furniture that’s just as modern without detracting from the flair of the original historic property? How to motivate ourselves to leave in wintery climes when it’s so cozy and there’s housemade Negroni waiting for us? (Pair them with locally made snacks at the mini bar.)

It turns out there’s plenty of local gourmet fare to be had, starting across the street. Tandem Coffee Roasters, a funky converted former gas station, has great brews and pastry chops to match, with creative flavors like pistachio-poppyseed scones and lemon-iced gingerbread cake that are just as much works of art as area gallery visits. It’s so good hearty New Englanders even take advantage of outside seating on picnic tables in 30-degree weather the weekend.

Tandem is not alone in the cool quotient when it comes to coffee shops and emo-chic mystique. There are all sorts of amazing options, especially downtown, but for a sweet treat that can’t be missed, The Holy Donut is right in the center of the shopping and dining action. Made from Maine potatoes (in the flour), the best flavors sell out early, so it’s worth starting a stroll there on Sunday mornings. 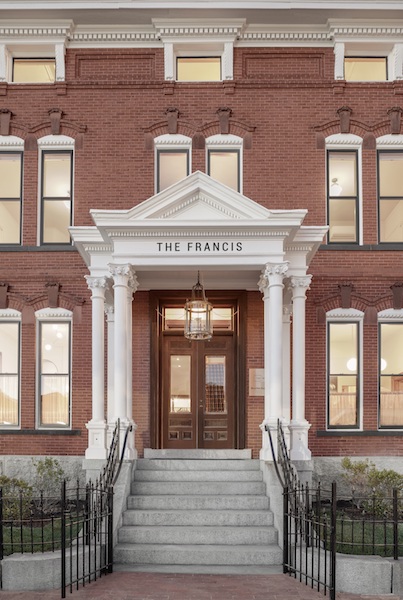 Portland makes getting portly easy, thanks to its reputation as a mini mecca for talented New England chefs and foodies, so it’s no surprise seafood factors prominently here into most menus. There’s reason especially to visit in winter since January and February are the prime season for the most succulent lobster, scallop and oyster catches thanks to the frigid waters. Eventide for the latter can’t be missed for bivalve fans, and Duckfat is renowned for its frites. But for a good old-fashioned fried seafood feast — the kind stubborn Yankees of yore can’t even complain about in gentrified times — Bob’s Clam Hut is where it’s at. Open for 63 years in Kittery on the drive up on Route 1, the Portland location opened last year and carries on the legacy of delicate and pillowy fried bellies (the creme de la creme of clams if you ask a local), along with the iconic New England lobster roll, lobster stew and Bob’s own recipe for tartar sauce.

Since caloric indulgences are the name of the game here, you might as well go all-out and tack on an adult beverage or two. For cool convo and German-style beer hall seating, check out Novare Res Bier Cafe, tucked neatly down a small alley in the Old Port District. With a hundred on tap, there’s no shortage of international and local options to choose from (you can also hit up Shipyard and Rising Tide directly for tastings and tours; the latter even has lawn games and afternoon food trucks).

There’s also food for thought in terms of the cinematic arts at Nickelodeon Cinemas, which screens mostly arthouse flicks and independent films. Sure, it isn’t the reserve-your-seat-in-advance subwoofer extravaganza you’re used to at home, but there’s a certain homegrown charm to having more options than just the latest from Dwayne “The Rock” Johnson. Of course, you can always cuddle up in front of the flat-screen, too, back at The Francis, with extra-cushy comforters just right for post-comfort food.