On June 4, 2019, The New York Times reported about Trump administration constraints on American travel to Cuba. They ban group educational and cultural trips not booked by June 5, 2019, and prohibit visits by cruise ships, private yachts and fishing vessels. The restrictions reverse President Obama’s procedures from 2011, which approved “people-to-people” travel with a licensed tour operator.

These group “people to people” trips were the most common way Americans traveled to Cuba and how I revisited Havana in April 2015. As a teen on a Caribbean cruise, I toured the city on a day-long shore excursion that lasted late, after the extravagant La Tropicana nightclub revue. That experience was so memorable I jumped at the chance to travel with 20 media professionals. SmarTours customized our five-day tour, booked through Cuba Travel Services, which holds a special license as a Travel Service Provider with Havanatur, the official Cuban government-sponsored inbound tour operator. It’s worth adding that in a recent conversation with SmarTours, they confirmed the tours are still functioning. 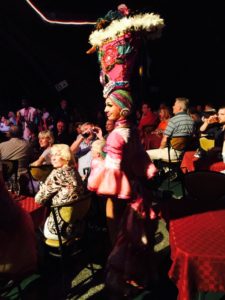 My recollections from the trip are vivid. Our adventure began with an overnight in Miami, before the short, early morning flight. Immediately after landing in Havana, we met our local guide, boarded a bus and headed to Revolution Square, with its 300-foot memorial and statue dedicated to Cuba’s national hero, the poet José Martí. Revolutionary heroes Che Guevarra and Fidel’s confident Camilo Cienfuegos are depicted on large iron sculptures fronting two of the adjacent government buildings.

The shiny shells of 1950s Ford and Chevy convertibles, known as “Yank Tanks,” (most are propelled with newer Russian or Mitsubishi engines) encircle the plaza and are for hire. As we approached the brightly colored, classic cars, which look fabulous from afar, I noticed rusted exteriors, peeled paint and cracked leather. We overlooked those details in the glee of sightseeing with horns blaring enthusiastically and took silly iPhone images of each other.

Cuba is famed for its Castros, cafés and cars. Let me add: contrasts. The gleaming exteriors and blemished interiors of the automobiles were emblematic of the many dramatic juxtapositions we witnessed, mostly between what has been meticulously restored and what has remained deplorably unheeded.

Buildings in La Habana Vieja, established in 1519, illustrate the point and can be seen walking the maze of cobblestone streets that pass squares and churches from Plaza de Armas, with its 16th-century Baroque castle. Within the historic square-mile UNESCO World Heritage site, there are about 300 remarkably reconstructed, 19th-century edifices. Eusebio Leal Spengler, friend of Fidel and historian of the city, is chief administrator of Habaguanex, the company that preserves and redevelops the historic colonial center, with funds supplied by 45 percent of each tourist dollar. The Fine Arts Museum, which showcases 300 years of Cuban masterpieces, and the Great Theatre of Havana — with its impressive exterior restoration are some of the loveliest. Restoration progresses slowly and there are countless blighted blocks with windowless buildings yet to be transformed throughout the city.

Our tour guide introduced us to some impressive places. We were taken to an apartment on El Callejón de los Peluqueros (Barber Street) in Old Havana, enhanced as a barber shop museum; the resident, we were told, also launched a free barber school nearby, and was transforming the street by adding a café and children’s park, and by hiring gardeners to enhance its appeal. And we were driven outside the city to Jaimanitas, where artist Jose Fuster transformed his modest home, Casa Fuster, into a phantasmagorical, colorfully mosaic-studded, Gaudiesque, Park Guell-like, home studio and boutique, where his disciples create and sell brightly colored ceramics. 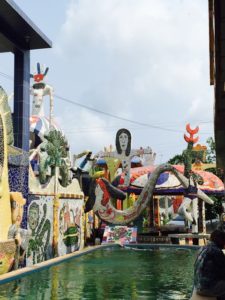 Our guide from SmarTours arranged for a few of us to privately visit the synagogue, beautifully restored (much of it by Canadians who freely travel to Cuba). The guide told us the few remaining living congregants are both elderly and needy. Donations provide Band-Aids, Depends, aspirin, medicine and more, given out from the balcony overlooking the sanctuary, where women once prayed. Donations also pay for transportation to Saturday morning services and the complimentary weekly luncheon that follows.

We also visited the University, where education is free, though competitive. The well-educated population produces gifted musicians, dynamic dancers, talented singers and well-trained doctors who give free medical care. Still, even basic supplies, like toothpaste and diapers, are rare and expensive. I saw missing legs, arms and teeth, but no obvious prosthetics.

Havana is home to warm, amazing, resilient, educated people who earn a pittance (they were quoting $18 monthly for waiters; $30 for doctors). Residents receive housing (though three generations often live together) and pay little for utilities, which are not dependable. Satellite television reception still depends on the weather; electrical outages, plumbing issues and other infrastructure problems are commonplace; and internet access was so expensive even our guide, who earns tips beyond his salary, has to share access with friends. As for the monthly food rations, which were meager, The New York Times reported in May 2019 Cuba has rationed food and soap; other outlets reported about the food shortage.

It appeared to me there was some capitalist spirit among anyone who could work for cash, including the able-elderly. In Old Havana, tourists pay someone for toilet paper outside the public restrooms and costumed people in military dress for photos. Vendors sell bottled water on the street or through apartment windows. One doctor whose home is also an art gallery works as a salaried physician in a foreign country to maintain his house.

As for politics, I viewed anti-American billboards and listened, repeatedly, to charges that blame the American embargo for Cuba’s poor economy and denounce American crime, drug problems and expensive health care. Everyone I met lauded free education, free medical care, fabulous culture and zero crime; they also spoke hopefully that the end to the embargo would enhance their living standards. They worried, however, that it could increase inequity between rich and poor, crime, drugs, homelessness and corporate uglification.

My short and limited exposure gave me a much-appreciated glimpse of Havana in transition. Part Two will reflect my experiences at hotels, restaurants, bars and clubs in Havana.

This year marks the 50th anniversary of Walt Disney World Resort. To honor the anniversary, Disney parks are rolling out new attractions, experiences and more!

Theme parks are a great way to escape reality as most offer different worlds in each section. Guests can explore different worlds, from their favorite TV show and movie franchises to much-loved video games. Mario and friends have been beloved video-game favorites for decades, and they finally get their own section of Universal Studios Japan.

Although FaceTime, Zoom and other forms of virtual communication have helped during these difficult times, sometimes it just doesn’t feel like enough. Let your friends and family know you are thinking of them by sending something personal, so they will have a piece of you with them.