Have an A-Plus Weekend in D.C. With the Family

If you thought Hamilton was the hardest ticket in town to get, think again.

The Broadway smash is nothing compared to entry at the new National Museum of African American History and Culture, where everyone from tourists to the most well-heeled Washingtonian is ditching work to score a coveted timed entry. Weekend tickets free before November are about as rare as finding a pearl in an oyster. That is, of course, unless you get a little help from a friend.

In this case, that pal would be the concierge at the Willard InterContinental Hotel, celebrating 200 years and a recent renovation to common areas and its 335 rooms and suites. Just two blocks from the White House and within walking distance of just about every D.C. bucket-list item — even walkable in muggy August climes — the location isn’t the only hallmark. Nicknamed the “residence of presidents,” owing to two centuries as a meeting place or lodging for every incumbent excluding our 45th, there’s plenty of historic charm to discover on a weekend getaway.

The nation’s capital has three airports within an hour but a direct flight into Regan (DCA) puts you within a 20-minute drive on a Friday evening. Congress typically isn’t in session during the summer, but if you’ve actually put in a long day at work before a getaway, it’s time to ditch the bags and grab a tipple. A strong, signature mint julep has surely knocked off a few argyle socks in the Round Robin bar, where movers have met the shakers (in more ways than one) since 1847. Or, opt for a glass of wine with dinner at the adjacent Occidental Grill & Seafood. There’s always an express business lunch (this is Washington, after all), but the timing for another fixed-price delight is just right during the latter half of August thanks to indulgent three-course Restaurant Week menus here and around the rest of the city.

The capital is yours to discover in the morning after a restful sleep in spacious rooms starting at 330 square feet. Whether it’s a couple’s getaway or family break, there are lots of options with king beds or two queens, many pullout couches and plenty of room to move around and admire views of the Washington Monument and Pennsylvania Avenue.

Get in your selfies in front of the landmarks before it gets really hot, then head to one of the free Smithsonian museums in the morning (all but one open at 9 a.m., and are free). The animals are most active at National Zoo earlier and, at 9:45 a.m., there’s a fun highlights tour led by a zookeeper. When cooling off is in order, head to Old Ebbit Grill, a Beaux-Arts former theater where both the well-heeled and sneakered come for burgers, seafood and a kids menu (wait staff is surprisingly patient when those cracker crumbs hit the ground!). 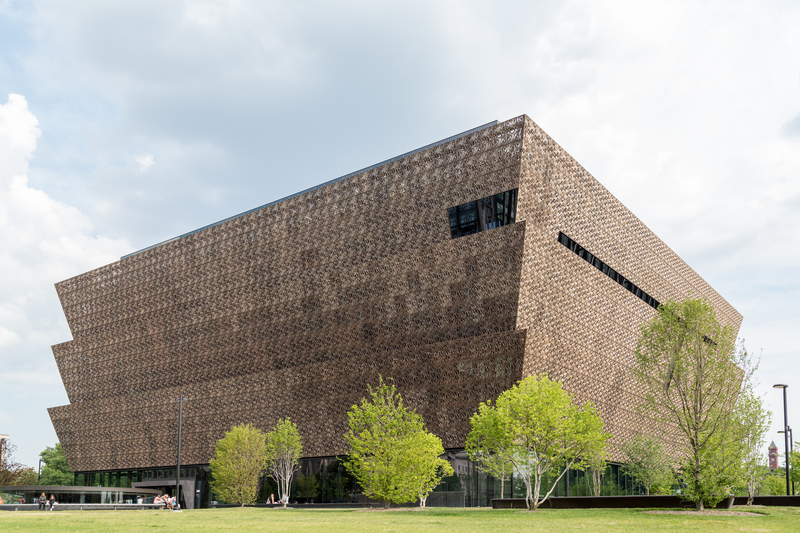 Next up is air conditioning and several floors of cultural and historical exploration at the Museum of African American History and Culture. Start on the bottom — where the history of migration from the Dark Continent to the Americas begins, and get ready for some heavy themes. There are artifacts from Harriet Tubman, Frederick Douglass and, on the higher floors, even entertainers like Jimi Hendricks.

Some moments of reflection are in order, and it’s sure to be a quiet walk to pick up a Monuments by Moonlight trolley tour. There are more somber moments when visiting the Iwo Jima and Vietnam Memorials at twilight, but the commentary is also delightfully glib and discovering our country’s treasures with visitors from other countries is a source of enjoyment and pride.

For a real “tale of two cities,” Sunday is worth setting aside for discoveries at the new District Wharf, a contemporary study in opposites. District Doughnut and Blue Bottle Coffee are delightfully right beside each other, but for those wanting to continue Saturday’s theme, Kith and Kin — D.C.’s only Afro-Caribbean restaurant — hits the spot for surprising spices and brunch cocktails at the city’s new InterContinental hotel (the rooftop pool is worth a stay alone!). Get some food for thought at Politics & Prose bookstore, or score some swag at boutiques in the capital’s most contemporary zip code before zipping off to the airport, just 15 minutes away.

Wearing sunscreen at the beach is a given, especially for little ones running in and out of the water — and anyone who forgets that usually regrets it with a vengeance the next day. One aspect of sunscreen I admittedly didn’t think about until just a few years ago is how detrimental its impact is on marine life and reefs. Oxybenzone is a chemical found in most mainstream sunscreens — it works to prevent sun damage, but is also carcinogenic and harmful to coral. The chemical makes coral more susceptible to bleaching and damages its DNA, interfering with reproduction and killing dependent marine life in the process.

IMAGINE SETTING SAIL IN AN EXOTIC, far-flung destination, just you and your family or group of friends aboard a private yacht. The sun warms the deck, a soft breeze dances off the water, and an über-attentive crew caters to your every whim while the personal chef whips up the finest of the local cuisine with all of your culinary preferences top of mind. All the while, the captain navigates the yacht into secluded coves; to pristine, seemingly undiscovered beaches; or even to the hottest spots along the coast for a night out on the town.

An interesting and accidental beneficial side effect of recent travel bans is that large swaths of the world affected by over-tourism are beginning to heal themselves. Major cities from Los Angeles to London and Beijing are reporting their best air quality in years with less nitrogen dioxide and carbon dioxide emitted by cars and industry. The canals in Venice are so clear, schools of fish and even a dolphin were easily spotted by locals — all of this and more taking place before Earth Day’s 50th anniversary in April.