Zermatt’s colorful ski boutique-lined Bahnhofstrasse, stylish apartment-style lodgings of every description and views of the Matterhorn from every angle make up one of Europe’s most family-friendly destinations — and it certainly does not hurt that it is proclaimed the “world’s best ski resort” by organizations like SnowOnline.com year after year. During the warmer months, meanwhile, you will see many family groups with kids strolling the shopping streets (sometimes alongside a herd of about 50 free-range Valais Blackneck goats around 9 a.m. and 5 p.m.), enjoying fondue and pizza at nearby cafés, and taking advantage of the many hiking and bike trails. 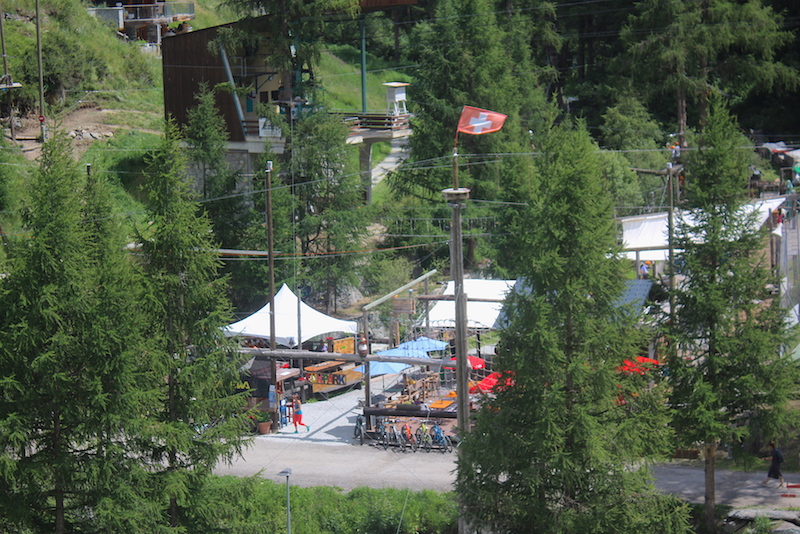 The glamorous-but-accessible veneer, however, slightly obscures the fact there is plenty of historic and cultural substance that goes along with style in Zermatt. Consider that Zermatt’s first street was installed in 1280, it was officially incorporated as a town in 1563, the train station anchoring Bahnhofstrasse opened in 1891, and it was the original “extreme sports capital” of Europe from the 19th century until the 1940s. The Mountaineers Cemetery is testament to this, consecrated in the 16th century to pay tribute to those who lost their lives while attempting to make history. 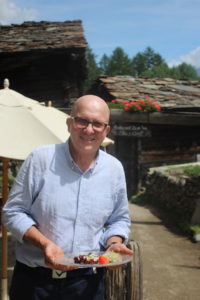 A two-hour tour of the village originating at the Tourist Office in Zermatt provides a nicely rounded orientation to Zermatt’s historic high points. Veteran guide Franz-Josef Imboden deftly engages visitors through his storytelling skills as he introduces visitors to colorful local characters (like mountaineer Ulrich Inderbinen, who lived to age 104); 16th- and 17th-century dwellings, stables, farms and storehouses lining Hinterdorfstrasse (“the rear village” once known as Walser); key photo points with Matterhorn vistas (Kirchplatz, the Kirchbrücke bridge); the aforementioned cemetery; and shout-outs for must-visit museums such as (of course!) The Matterhorn Museum – Zermatlantis. Given the popularity of food tours across Europe, he adeptly works in stops by the village’s most important gourmet shops to sample cheeses, dried meats, hearty breads, cookies and other treats.

Anybody wanting to scale the heights the safe way will spring for a ride on  the Matterhorn Paradise cable car, which encompasses 30 mountain peaks, and 14 glaciers straddling Switzerland, Italy and France and a trailhead at Matterhorn Glacier Trail, an open-air museum of sorts with 23 info signboards. A ride on the Gornergrat Bahn, Europe’s highest cogwheel rail, is a fantastic first day activity, especially for active families who can use the train as a way to ascend into the mountains for more up-close views of the Matterhorn and access to a variety of hiking trails at Rotenboden and Riffelberg. While it only takes 35 minutes to arrive at Gornergrat station to be fully surrounded by all things Alps, residents will emphatically recommend planning for an entire day at the top to truly appreciate the splendor at its fullest. 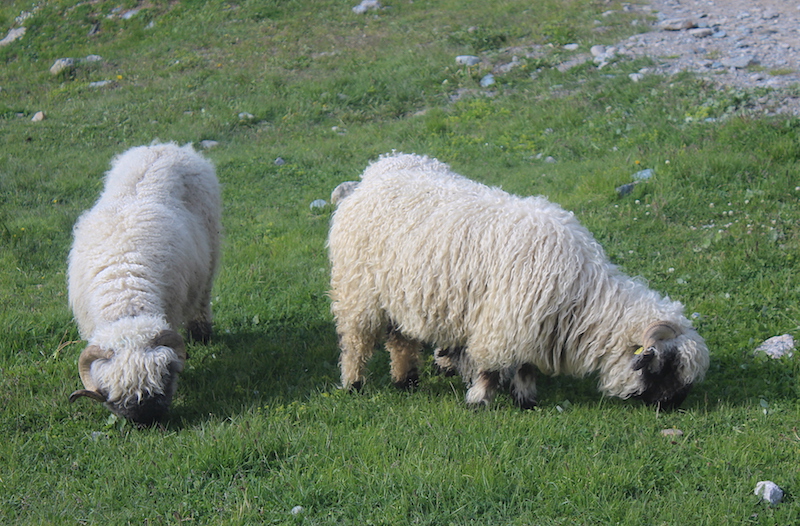 Those in town for only a few days will find a visit to Hotel Riffelberg midway up the route at the Riffelberg Station time well spent. The area’s oldest mountain hotel (opened in 1855) is home to a Jacuzzi in the uninterrupted shadow of the Matterhorn, enchanting sheep and goat sightings, and prime views of other major mountains such as Obergabelhorn and Weisshorn. It also has the distinction of having Mark Twain as a guest in 1878. Twain’s stay inspired him to capture Zermatt’s “extreme” mountaineering craze of the time in his inimitable way.

Speaking of inspired, those interested in upgrading their Zermatt stay to the peak of luxury may want to consider booking a few nights at Grand Hotel Zermatterhof, and not only because of its lavish-but-homey surroundings (rooms and suites boast Matterhorn views and that wonderful, toasty smell of cedar). The wow factor starts with a horse-drawn carriage that picks guests up from the train station and slowly ambles to the property down Bahnhofstrasse, effectively whetting one’s appetite for the boutiques, souvenir shops and restaurants. Other classy aspects of the hotel include attentive concierge personnel, Say Cheese! Restaurant’s exquisite yet fun-to-eat fondue, and executive chef Heinz Rufibach’s GaultMillau and Michelin Star-rated fare at Alpine Gourmet Prato Borni and Lusi. 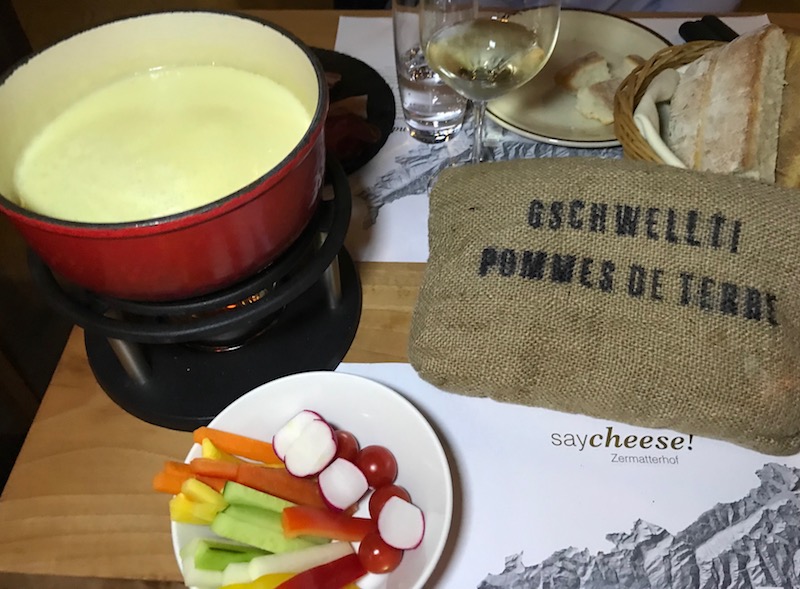 About 1.5 miles from the Grand Hotel Zermatterhof, a couple of hiking and bike trails wind toward Zum See, operated by the Mennig Family since 1984. Chef Max Mennig, wife Gretl, son Marcus and their talented team rethink fine dining as a deliberately unfussy experience people of all ages can savor. The restaurant occupies a cluster of barns and cabins around the same age as those lining the Hinterdorfstrasse. When there is no snow, the air is filled with aromas of wildflowers and whatever is coming into season in the Mennigs’ herb, flower and vegetable gardens. Max clearly loves the presence of kids as, like a good uncle, he always has a toy available to keep the youngest entertained and allows older kids to climb boulders and hills while waiting for their meals. However, there is no question Zum See is a connoisseur’s paradise, given Max refined his techniques at several luxury hotels earlier in his career and what grows in the garden goes into elegantly expressed traditional and contemporary dishes. 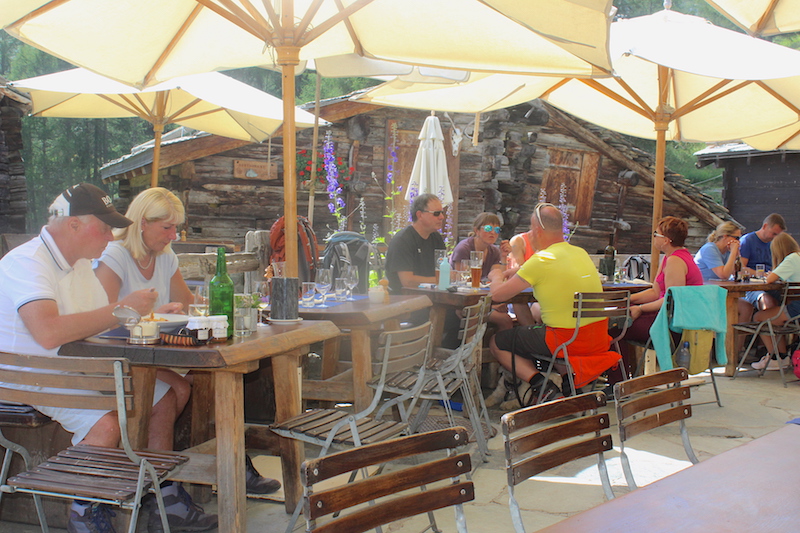