What do you do when the kids need a diversion from the sprawling pool complexes and palm tree-covered beaches of a tropical resort? If you are staying at Barcelo’s Maya Grand Resort, there’s an exciting new option that’s literally right across the street. 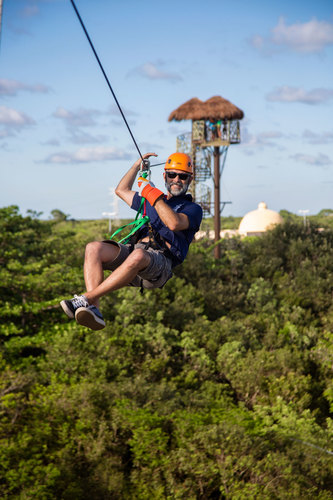 This past summer during a family vacation to Barcelo Maya, my family and I ventured over (no pun intended), trading our poolside shaded lounge chairs and swaying hammocks for a little adrenaline rush. After checking in and signing a waiver — advanced reservations are recommended — we placed our phones and water bottles in the provided lockers. (Cell phones are not permitted on the attractions on the Fly side of the park for obvious reasons.)

Each section of the park has a separate entrance, and we decided to hit the Fly side first. The first step was to get fitted for harnesses, gloves and helmets, after which we watched a safety demonstration about how to hook and unhook our carabiners. The system is redundant, so you never have to worry about you or your kids forgetting to hook something important and falling — the worst that could happen was you would fall a few feet and then start dangling, and staff are at the ready to assist.

First up were the seven zip lines, which started off short (relatively speaking) and became increasingly steeper and longer. Staff was so friendly and super helpful, especially with my 12-year-old son who was nervous since it was his first time. While riding one line he just didn’t get enough momentum to make it over to the next platform, so a staff member followed him across and helped him the rest of the way. In between lines we waited on the platforms high above the trees, where we were able to see the sea in the distance. We had a choice to do a wet or dry final line; the former lets you drag your feet and lower body though a pool that runs the length of the line. Since we weren’t wearing our bathing suits we all opted for the dry line. 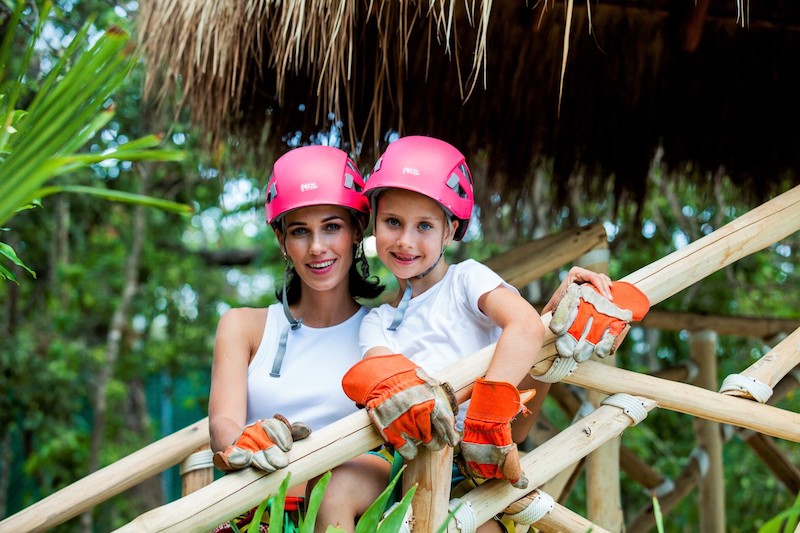 Because we had recently done a ropes course at home we decided to skip it and move on to the Plane Coaster. Anyone who’s ever ridden a cat and mouse-type ride at an amusement park will recognize the small cars, high track and hairpin curves of a ride like this one. The consensus though was its slow speed and shallow hills were all a bit underwhelming, though it might be more fun for the younger set — my kids are 15 and 12. What seemed decidedly more thrilling was Tarzania, a zip coaster set on the underside of a track where you hang from a harness and navigate the dips and turns; unfortunately the ride was closed the day we were there.

Last up were the two bungee rides. For the first, we were attached to a bungee and instructed to step off a platform — the scariest part of the entire experience. We free-falled for a few seconds before the cable caught and we descended slowly the rest of the way to the ground. That was enough of a thrill for my son and I. My husband and daughter decided to also try the bungee swing, for which they sprung from a platform, free-falled for a bit and then swung like a pendulum several times before being stopped by a cable. 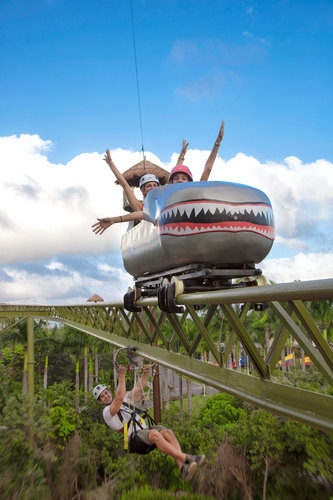 After turning in our equipment we headed over to the Ride side, where admission gives you three rides on any one or combination of the three options. We first drove the go-karts. Since the park just opened the cars are new and the long track is smooth; the only thing we would have improved would have been to tweak the engines and give them more speed. The kids took all three of their turns on the go-karts, as the only other for them were quad cycles whose movement was dependent on pedal power — not the most compelling idea in the 90-degree heat. Anyone who has a valid driver’s license can take the ATV vehicles for a spin on the off-road path that’s full of rocks, hills and places to get your vehicle splashed and muddy if you choose. My husband and I found it to be fun yet challenging — for me if was way harder than I thought it would be, so much that I turned down the second pass at the track.

After that we collected our things from the locker, checked out, tipped the staff for their great, friendly service (there are tip boxes on the way out of both sides of the park) and went to lunch at the resort. It was definitely a memorable morning and a fun addition to our Mexico trip.

Admission to Ventura Fly & Ride Park starts at $79 for adults and $59 for children for a one-day pass, and the park is open 365 days a year.