Helsinki, Finland, found a way to grow into a sleek version of itself while still holding onto the best parts of its history. During our three-day visit, our family discovered as much as we could of this modern city with its long-ranging roots.

Our family of four stayed at the Scandic Park Helsinki, centrally located and included a free, authentic Finnish buffet breakfast prepared with organic ingredients. The boys loved all the child-friendly options (read waffles and whipped cream), as well as the decadent pastries. We even caught a glimpse of the breakfast mascot, a giant furry animal called Sigge, who freely bestowed hugs to adoring children.

We opted for the Helsinki Card, which gives free admission to more than 25 attractions and discounted admission to many others; free public transportation on buses, trams, trains and the metro; as well as the famous HopOn HopOff bus tour.

Across the street from the Scandic Park Helsinki is a stop for many sections of the public transport system, which we found to be one of the best we’ve ever used. Many routes took us around and out of the city, all free with the Helsinki Card. We planned to take our first tram to Stockman’s Department Store and found Apple maps on our smartphones had already downloaded the entire transit timetable right into our hands. This simple convenience made the biggest difference in making us feel supported in this foreign country where every word is a combination of three. 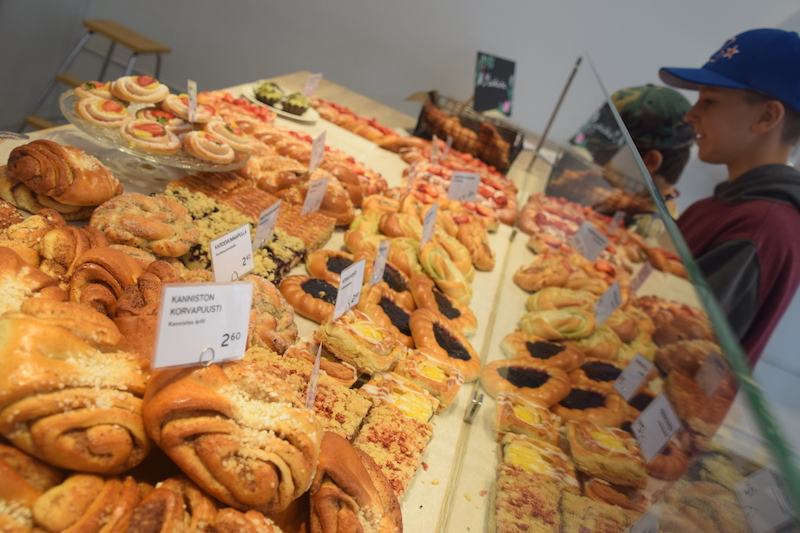 At Stockman’s, we met Heather from Heather’s Helsinki who, along with another family, whisked us through the biggest department store in the Nordic region to start our first family food tour. On the bottom floor of Stockman’s is a large supermarket with products containing many varieties of food labels that Heather attempted to decipher for us. The task was complex and involved graphs. It was wonderful to know how responsible the food industry there is to the people they serve. Then, we tasted gourmet licorice at Lakrids by Bülow. Now, I’ve never been a huge licorice fan, but flavors like Salted Caramel and Sea Buckthorn gave me a new appreciation for it. The boys didn’t care for theirs, but they did love the Karelian Pie, rye dough stuffed with rice porridge, which we tasted later and had every morning for breakfast. They also appreciated the pastries, again. We walked through Old Market Hall, Vanha Kauppahalli, operating since 1889, where vendors sell everything from cheeses to coffee to fish and reindeer. We sampled the reindeer and tried not to think about that too hard. Then, we walked outside to Market Square, surrounding Helsinki Harbour. Here, locals come to buy their supplies and food. We tried various jams shared by the people who made them, including my new favorite, lingonberry. If our kids had been willing, we would have come back after the tour to sweat in the saunas at the adjacent Allas Pool. We read they offered one of the best sauna experiences in the city, including sauna yoga. Saunas are a big thing in Finland. Like, really big. It is estimated there are 2 million saunas for a population of 5.3 million. Instead, we looked forward to using the hotel sauna that overlooked the city and concluded the tour with a pub lunch and a flight of beer. 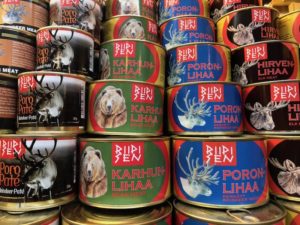 With the Helsinki Card, we decided to explore some of the many museums in our area. At first, we walked along the street below our hotel, Mannerheimintie, bordered by the beautiful Toolonlahti (Toolo Bay). Then, we stopped at a building that said it was a library, though it was unlike any library we’d ever witnessed. The Central Library, Oodi, is three stories of glass walls and sleek wood and steel design. Sure, there were books but there were meeting spaces and classes and workshops with 3-D printers and sewing machines and even a gaming area where kids were playing “Fortnite” in glass cubicles with giant-screen TVs. My boys were immediately in love and wanted to move to Helsinki. There were sections open to storytime and kids playing in circles. There was a café and an outdoor sitting area and everyone was doing everything but being quiet. With all those resources, a person could run a business empire from the corner library computer. Outside, a playground resembling a mini-ropes course hosted children scrambling around, figuring it out, and my boys joined the fun. After burning some steam, the boys were ready to dive into the multimedia presentation of Finish history at the National Museum of Finland, which combines enough gadgetry to make history feel alive. There is nothing we could normally do to interest the boys in exhibits but here they were, headsets on, pushing buttons and learning about Finland despite their best efforts.

Hidden in plain sight, in the middle of the city, an incredible amusement park awaits visiting families. Linnanmäki offers rides that will boggle your mind with the complexity of their twists and turns. Although there are plenty of sections with various options for all types of ages, the circular design of the park allows families to visit each area and ride all the attractions before moving on to the next point. Height restrictions prevented one of the boys from riding some of the higher speed rollercoasters, but many other engaging attractions awaited, as did more Finnish desserts and even an old-fashioned fun house that kept both coming back for more. 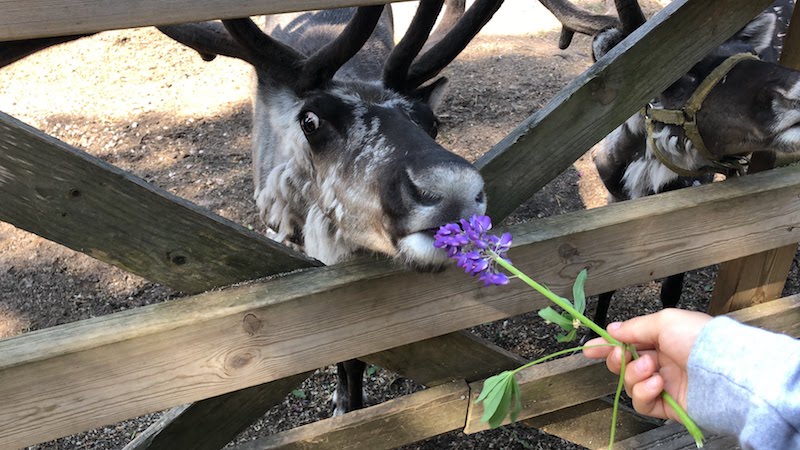 About an hour’s tram-to-train-to-bus ride out of the city is the woodland home of Rudolph and five of his retired friends in Espoo at Nuuksio National Park in the Reindeer Center. Ullo, the reindeer’s caretaker, told us reindeer roam free in Lapland, in the Arctic northern regions of Finland, Norway, Sweden and Russia. There are strict rules governing reindeer herding and it is mostly practiced by the Lappish, or Sami people. The Reindeer Center offers families the experience of learning about the animals while feeding them lichen. “It’s like candy to them,” Ullo told us. Guests also have the chance to rent one of the two cabins with windows that open to the reindeer’s front yard. We got to go inside one and even petted Rudolph’s cousin as she poked her head through the open window. After the reindeer were sated, everyone warmed up in the traditional tent called a kota, where a fire heated the hot chocolate they served with buns.

The storybook magic continued after about a 30-minute hike away from the Center, that ended at Natura Viva Nuuksio Hawk Nest. Open everyday from May to September and weekends after, this wide forest vibrates shades of green. The lake opens to patches of lily pads reserved for Tinkerbell to play upon with her friends. We rented a kayak and two stand-up-paddleboards to explore this natural wonder. Tying their boards to one of the two decks, the boys stripped down to their undies and executed the polar plunge. A close-by fire warmed their bodies and we went back to the city with a piece of old Finnish charm tucked into what is now a modern Finnish wonderland. 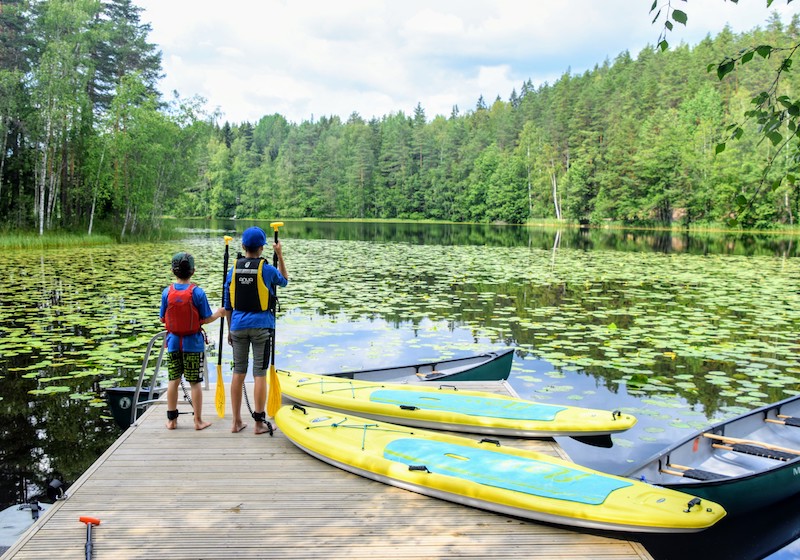