What to Do in Cordoba with Teens

Not nearly as well-known (or as crowded) as Madrid or Barcelona, Cordoba is a compact city, easy to get around and filled with attractions that set it apart from the rest of Spain. It’s two hours on a direct flight from Madrid (MAD); arriving on a flight from the United States, we were in Cordoba in time for lunch. For a teenager just completing her second year of high-school Spanish, even buying train tickets was an exciting adventure.

Cordoba’s appeal is not just its history — in the 10th century, this was the greatest capital city of Europe, more important culturally than Rome or Paris. It’s that Cordoba is still filled with treasures dating from that time. Earlier relics of the Roman city pop up unexpectedly as you explore.

Choose a small traditional inn in the heart of the Judería or in the nearby tangle of streets that make up the old town. While new modern hotels farther out may have swimming pools, they give you little sense of being part of the city. Try Hotel Albucasis, set around the leafy patio of an old town house a five-minute walk from the Mesquita. 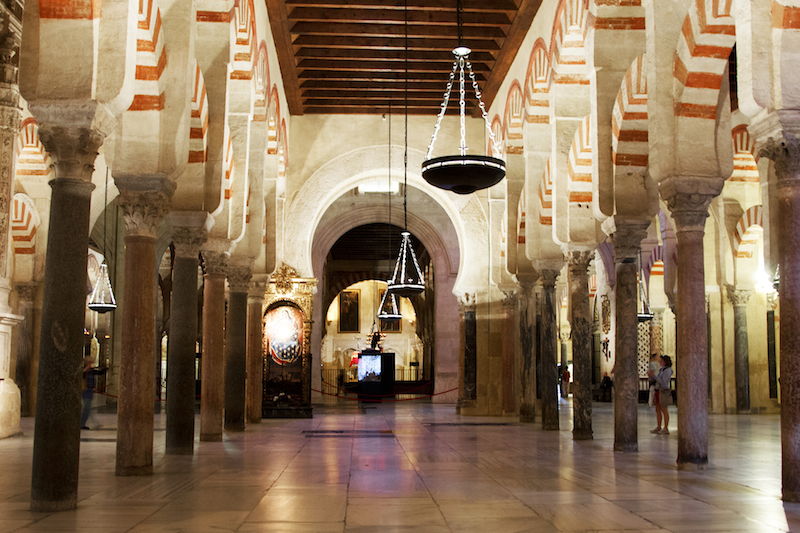 The prime site in Cordoba, a UNESCO World Heritage site and one of the most important attractions in Spain, the Great Mosque is one of the finest works of Islamic architecture in the world. Whatever your age, this place is impressive and even the most blasé teen can’t help but be wowed when they step into a vast forest of columns topped by red-and-white-striped Moorish arches. These are aligned so whichever way you look, they line up in geometrical precision. That the columns, on closer look, turn out to be salvaged from Roman buildings is even cooler. Tip: Be there at 8:30 a.m. to enter while the mosque is quiet — and free. The admission price is high and there are no discounts for students, so the saving makes it worth getting up early. And the hush during that first hour makes it more atmospheric.

The long pedestrian bridge spanning the Guadalquivir River was built by the Romans. Go there in the evening to enjoy the musicians and artists and meet locals out for their evening stroll.

Step beneath the Archeological Museum to walk on Roman streets and try to imagine what this looked like when it was a great theater. Touchscreens (in English) reconstruct it, and you can see whole fallen sections as they once appeared. The stage still lies unexcavated under the square in front of the museum. A couple of blocks up the hill is an entire section of a Roman temple, its columns a contrast to the modern buildings around it. You can watch the excavations in progress and see other bits and pieces recovered so far. (Tip: There’s an ice cream stand across the street.) 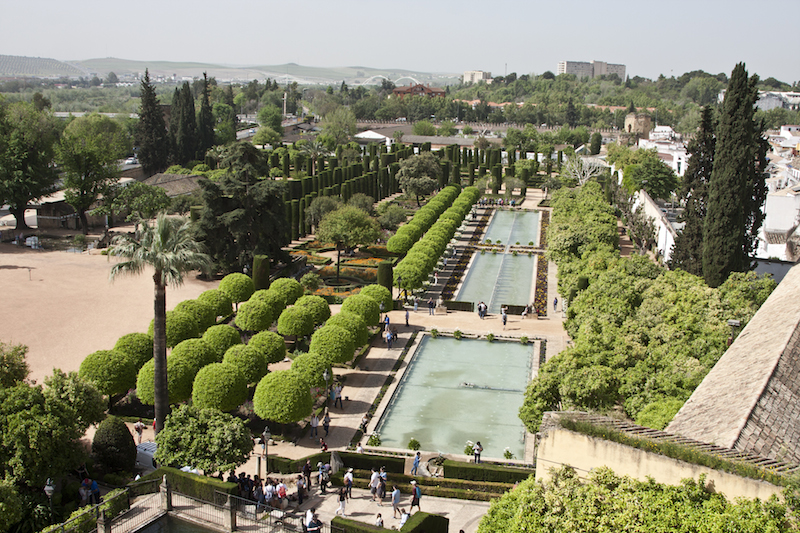 To see the style in which the Islamic monarchs lived, descend into the excavated bath house near the Alcazar. Audiovisuals are in English and Spanish.

Cordoba is known for its leather work and silver jewelry, the latter often using traditional Moorish designs. These graceful lines are lovely translated into intricate filigrees of silver and make especially beautiful earrings. We spent quite a while deciding which pair at the atelier of Ana Martina, on Calle Tomas Conde in the Judería. 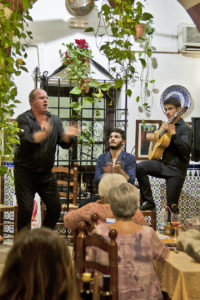 “Tourist show,” Mary sniffed as we passed a restaurant where all eyes were on the swirling red skirts of a flamenco dancer. But the sounds of flamenco guitar drew us into another nearby patio and we decided to stay. The all-male trio — guitarist, singer and dancer — performed on a small stage throughout our dinner, which was quite good. So was the flamenco, and we all enjoyed watching the skillful footwork of the dancer. Mary was probably watching the eye-candy guitarist the most, though. We later discovered this restaurant belongs to the Federación de Peñas (flamenco artists), so we were watching Cordoba’s best.

Stop for a quick snack or create an entire meal by ordering several of these small plates. It’s a great way to sample a lot of different local dishes and, if you don’t like one, you haven’t spent a lot on it. Depending on the surroundings, tapas can cost as little as $2 each and in Cordoba the servings can be quite substantial. A trip to Spain isn’t complete without tapas.