Hiking inside a volcano crater, eating chicken grilled over a volcano’s fire, exploring caves formed by underground lava flows — all these adventures, plus giant sand dunes and beautiful beaches, await families traveling to the Canary Islands, a part of Spain located off the shore of Africa. Here are four adventures you shouldn’t miss. 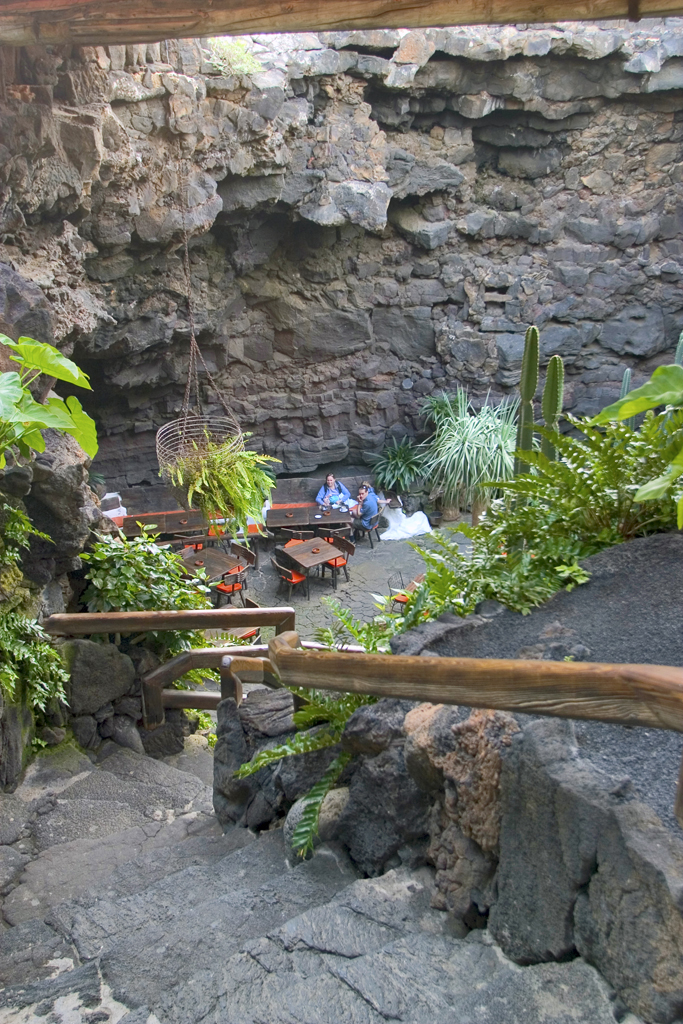 Spain’s highest peak, on the island of Tenerife, is a small part of the volcanic cone that slid into the sea leaving a crater 10.5 miles in diameter. The crater is surrounded by a rim, and inside this natural bowl is a lunar landscape marked by colorful and dramatic rock formations. Rare plants grow in this barren ecosystem, and beneath the giant crater, Tiede’s volcanic core still simmers. You can discover the secrets of this unearthly landscape by car or on its many hiking trails.

Start on the south side at El Portillo Visitor Center, with interactive exhibits of volcano formations, and explore the environment of the crater with maps that point out the trails. Cross the crater floor to see lava fields, jumbles of jagged black lava boulders, dunes of lava pebbles and outcrops of red, blue, yellow and black volcanic stone — English signs describe what you’ll see. To see the crater from above and sweeping views of the island, ride the Teleférico cable car up Teide’s cone, a newer volcanic peak formed above the giant crater after the original top of the mountain slid off. 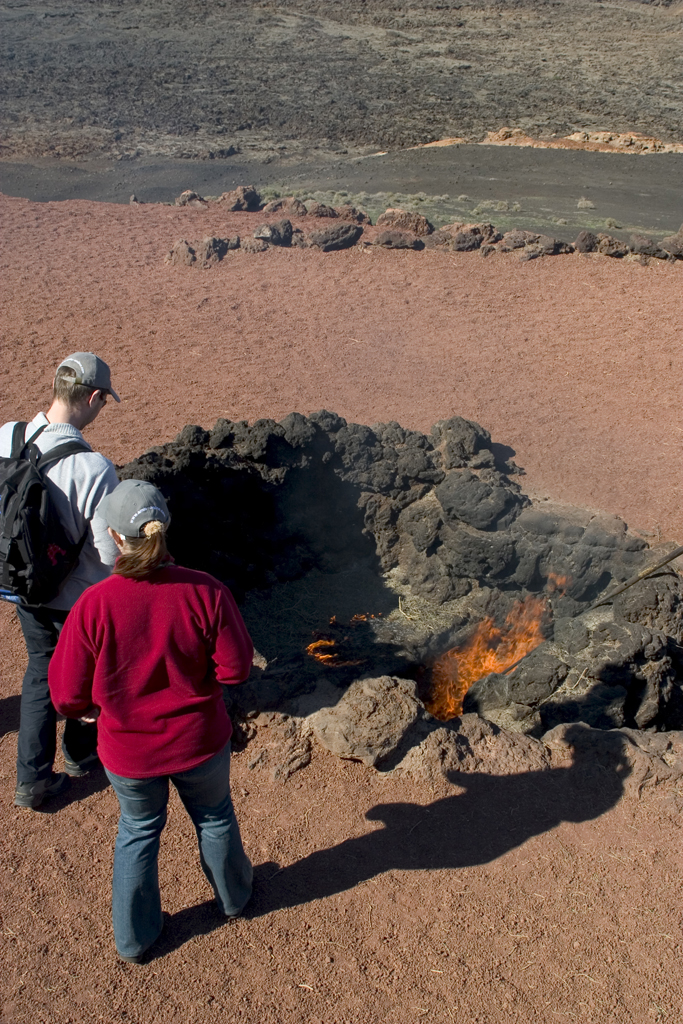 Volcanoes at Timanfaya National Park, on the island of Lanzarote, are still very much alive. The Montanas del Fuego (mountains of fire) are otherworldly landscapes without plants, left by volcanoes erupted in 1736. At the summit of Islote de Hilario, a volcanic cone, kids will find out how close molten lava is to the ground under their feet, where temperatures reach 284 degrees F, inches below the surface. Park guides demonstrate by tossing dry branches into a hole, where they spring, not flame, instantly. Water poured into a pipe returns as a boiling geyser. They can even watch their lunch sizzling on a grill fired by the volcano underneath. The narrated Route of the Volcanoes bus tour travels through the bizarre landscape stone swirls and surreal colors, stopping at various lava formations and volcanic tubes.

Elsewhere on Lanzarote you’ll see more of these hollow tubes called jameos, formed when the surface lava cooled faster than the lava and gases trapped beneath it. Jameos del Aqua, a huge lava tube in the Malpais de Corona, collapsed to expose part of a cave with a natural pool in it. The cave was transformed by Spanish artist Cesar Manrique into a semi-underground restaurant. Close to the capital of Arrecife, Manrique designed his beautiful and livable home, Taro de Tahiche, built below ground level in a partly collapsed lava tube, with dramatic sky-lit rooms and art exhibition space. 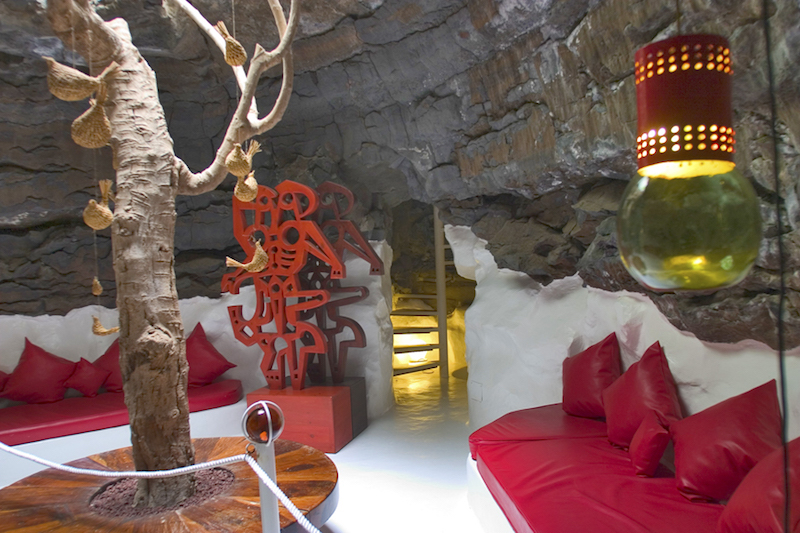 Cueva de los Verdes is part of a four-mile volcanic tube, part of which is open to visitors, who can walk through it to learn about vulcanism and the formation of tubes. The only changes made in the tube are the addition of lights and a paved path for safety. Low and narrow passageways lead into larger chambers, some as high as 30 to 40 feet with walls of red, orange and black.

Gran Canaria, the largest island, is known for the beaches of golden sand that line its southern coast. Right next to the beach at Maspalomas is one of the islands’ most dramatic wild places, a vast area of soaring sand dunes originating from sands deposited here in the last ice age. This vast area of about 1,000 acres moves by as much as 15 feet a year as winds blow and rearrange the dunes.

Kids love exploring the dunes on the backs of camels, and they’ll also love the long beach, where there are playgrounds, cafés and water sports. Rent umbrellas here to enjoy swimming in the mild and clear water or cruise on a glass-bottomed boat to see the sea life.

Fall is in the air! Leaves are changing color and the weather is starting to get cooler. Growing up in Pennsylvania, I get to experience all four seasons and fall is easily my favorite. There is just something about all the colors and activities that come along with the season, especially in Pennsylvania.

Most museums tend to be boring for children — they have to be quiet, they may not be interested in the exhibits and they can’t touch anything. At the Please Touch Museum in Philadelphia, kids are encouraged to run around, play and have fun while learning. The beloved museum will safely reopen in 2021 for kids and families to run, play and touch exhibits as they used to, and now is a great time to plan a visit next year.

In times of stress, boredom and even enjoyment, some of us find ourselves reaching for a treat or two — or a dozen. When you need the crunch or sweetness of a snack, but not all the guilt and remorse to follow, registered dietician Lisa Moskovitz, founder and CEO, New York Nutrition Group, recommends these not-so-bad snacks — they’re also great in kids’ lunches or as after-school snacks!

With summer coming to an end and schools restarting, don’t let the end of your summer go to waste. Make the most out of it and embark on one of these perfect daytrips from Pennsylvania.