5 Can’t-Miss Experiences for Families in Bangkok

Planning a trip to Thailand’s capital? Lucky you. This vibrant, fascinating city in the Land of Smiles is unbelievably rich in cultural, historic and culinary treasures. Here are five hidden (and not-so-hidden) things for your family to do during a stay (or even stopover) here.

Unbeknownst to many visitors, Bangkok has a series of canals that date back to the late 18th century and have given the city the nickname “The Venice of the East.” At that time King Rama I decreed he wanted to live on an island, so a large canal was dug linking the Chao Phraya River and created Rattanakosin Island, home to the Grand Palace. Before the city shifted its focus in the 20th century to building roads, additional canals were dug not just to please the king but for transportation, trade and irrigation; today you can navigate several areas of the canals via long-tail boat. While you can head to one of the piers like Tha Chang or Tha Tien and try to rent a boat, the language barrier might make it a bit trickier than you think. An easier option (and this goes for exploring Bangkok in general) is to hire a private tour guide through Tours by Locals and have them help you book one. The boat ride itself is pretty amazing and shows the dichotomous nature of the city: Luxury villas stand right next to ramshackle houses on stilts. But you’ll get to witness such a slice of local life: Men fishing adjacent from their front doors, women tending to the laundry, kids installed on bridges waving to passing watercraft. It’s really a unique way to experience Bangkok.

Watch a Traditional Puppet Show at The Artist’s House

Also located along one of the canals in Thonburi is Baan Silapin, “The Artist’s House.” If you take a canal tour you may end up passing it. Look for the white, black and red statues of human likenesses out front. But know boats won’t stop here and you have to access it by walking a path parallel to the canal; this is another instance where a local tour guide can help. Inside you’ll find a café selling coffee, Thai iced tea and butterfly pea tea, a small selection of locally made souvenirs and, on the second floor, artwork for sale. Every day except Wednesday there is a traditional puppet show performed at 2 p.m. based on different tales of Thai folklore. Kids will love it and getting your pic taken with the performers after the show makes for a great photo opp. 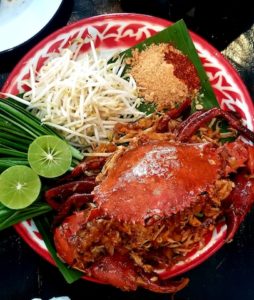 You can’t come to Bangkok without indulging in one of Thailand’s most iconic dishes. And while you might always associate it with the version mixing noodles with shrimp and tofu, there is a handful of other iterations. Baan Pad Thai is one of the most famous spots to sample it. Start with a passionfruit or mango soda or fresh coconut or watermelon juice and an order of som tum (green papaya salad with roasted peanuts and dried shrimp). Then order several pad Thais to share, like grilled pork, blue river prawns and mud crab. Save some room for mango sticky rice and tub tim, crispy ruby-tinged water chestnuts served with shaved ice and smoked coconut syrup.

Marvel at the Temple of the Reclining Buddha

Wat Pho is one of Bangkok’s oldest temples, built in the late 17th century during the reign of King Rama I. It’s the site of more than 1,000 Buddha images but its most striking and famous is the 150-long foot Reclining Buddha, one of the largest statues in Thailand that symbolizes the entry of Buddha into nirvana. (His feet alone are 10 feet high and his soles are inlaid with mother of pearl.) One hundred and eight bronze bowls in the hall where he lies represent the 108 auspicious characters of Buddha. Visitors are invited to drop coins into the bowls, believed to bring good fortune and help maintain the site; if you still have coins left over at the last bowl at the end of the corridor it’s especially lucky.

Strolling through markets is a serious pastime here. The quality, selection and price of souvenirs can’t be matched, and you can also partake in a staggering variety of street food. Pak Khlong Talat is a flower, fruit and vegetable market that comes alive in the middle of the night; though its blooms and blossoms are mainly for wholesale, it’s still cool to see the market awash in bright yellow marigolds, smell fragrant jasmine bracelets, closed long-stemmed lotus flowers and the pop of purple from a pile of orchids. Talad Kao Yaowarat is Bangkok’s Chinatown, where you’ll find Chinese delicacies and cooking ingredients along with Joss paper representing clothing, currency, electronics, toiletries and more that’s burned as offerings to the dead to make sure they have what they need (and like) in the afterlife. Wang Lang Market next to the river is a great spot to sample kanom krok (grilled coconut custards with chives and corn), kanom bueng (coconut crepes) and satay. And hit the ATM for enough baht as you’ll come across great souvenirs —  from batik prints to elephant-printed pants to jewelry to candy — at a lot of markets.