Nothing delights our kids more when they’re traveling than to discover some secret place. Sure, they like to go to the top of the Eiffel Tower and to see the lights in Times Square, but they also love the little places almost nobody knows about. 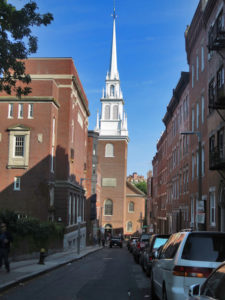 It was a new book that led my family to rediscover some of Boston’s secret places — and learn about some new ones. No Access Boston: Beantown’s Hidden Treasures, Haunts, and Forgotten Places, by Maria Olia (Globe Pequot), is a beautifully illustrated guide to the quirky Boston tourists rarely see.

Having lived in and near Boston most of my life, I know the city pretty well, so most of the places the author describes are familiar to me. She reminded me of some my kids hadn’t seen, so we went exploring with her list in hand to little alleys like cobble-paved Acorn Street (yes, rounded beach cobbles, not cut paving stones) and All Saints Way in the North End. The latter is the work of one man, who lined the narrow space between two buildings with hundreds of statues and mementos of saints. 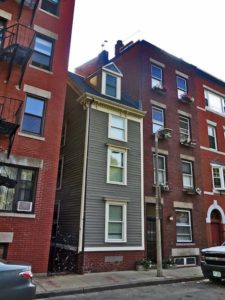 The kids long ago spotted the Skinny House opposite Copps Hill Burying Ground on the Freedom Trail, and Old North Church is hardly a secret. But the Behind the Scenes Tour there was new to us. It includes access to both the spooky crypt and the tall tower where Paul Revere’s friend hung the historic lanterns. Compared to the Freedom Trail, the Black Heritage Trail is indeed a secret — a route down the back side of Beacon Hill through alleys used by former slaves escaping bounty hunters.

Boston’s first skyscraper, the Custom House Tower is a landmark built in 1915 and was the tallest building in the city until 1964. When the wind blows strong enough it stops the clock, we learned from No Access Boston, and also that the tower has an observation deck at the top. Now part of a Marriott Hotel, the deck is open for tours at 2 p.m., Saturday through Thursday, weather permitting.

The Ether Dome at Massachusetts General Hospital was the scene of the first use of ether in surgery, and its historic Surgical Amphitheater is open to the public — if they can find it in the maze of corridors. Its steeply tiered seating was designed for teaching; a collection of medical curiosities will either delight older kids or gross them out.

The Ether Dome is the unlikely home of 2,500-year-old Padihershef, one of the first Egyptian mummies to come to the United States, brought by a Dutch merchant in 1823, two years after the opening of the hospital. The mummy is displayed here with its painted inner and outer cases.

There are more secrets in the book (including a lending library of marionettes), each illustrated with several colored photographs, making the book too big to carry around as a guide. But that’s okay — its purpose is to delight the armchair reader and point out places to find in their next trip to Boston. And according to our kids, it does a fine job of it.

Spice Things Up with Coconut Water

Coconut water is an amped-up version of plain H2O with many beneficial properties. For starters, it replenishes electrolytes after a hard workout and provides a source of vital nutrients, like potassium and vitamin C, to keep you on your best game. The best part about the delicious drink is it tastes like you are drinking straight from the coconut.

Splash the Day Away at Aquatopia

If your family is a fan of thrills and waterparks, it’s time for a trip to the Pocono Mountains in Pennsylvania: Camelback Lodge is the perfect family-friendly getaway for families of all kinds. When you book a stay at Camelback Lodge, access the resort’s indoor waterpark Aquatopia with more than 12 slides, a lazy river, interactive play areas, wave pool and more.

Dog-loving people will let you know traveling with their furry companion is a bonding experience like no other. At Bark Social in Bethesda, Maryland, guests can sit back, relax and enjoy a brew or two surrounded by energetic pups. No need to worry about the occasional dog outburst as professionally trained Bark Rangers monitor the grounds for a clean, safe play area.