A World Expo in 1967 and the Summer Olympics in 1976 left Montreal with two beautiful parks, one on an island in the St. Lawrence River built expressly for the expo, and the other atop a hill overlooking the city. Montreal has put both to good use in the years since, as parks for outdoor activities, sports and beautiful gardens. Between those and the riverbank parks in the city center, there is plenty of space for kids to run, and enough activities to keep families entertained.

The Olympic Stadium that housed the swimming and other indoor events has a huge slanted tower that supports the roof. The roof, shaped like a circus tent, was designed to be lifted off by big cables. This is the world’s largest inclined tower, and you can ride to its top in a cable car for a spectacular view over the city.

From Montreal’s combined French and British heritage comes the city’s love of flowers. In spring, summer and fall, parks and gardens all over the city are covered with bright blossoms. But none match the spectacular displays at the185-acre Jardin Botanique (Botanic Garden). There are 30 separate outdoor gardens with more than 26,000 species of plants. The Chinese Garden is the largest outside of China, with a pool, pagodas and pavilions, as well as a Moon Garden. Beside it, the Japanese Garden has the largest collection of miniature bonsai trees outside of Asia. Both gardens are like exotic fantasylands for kids. 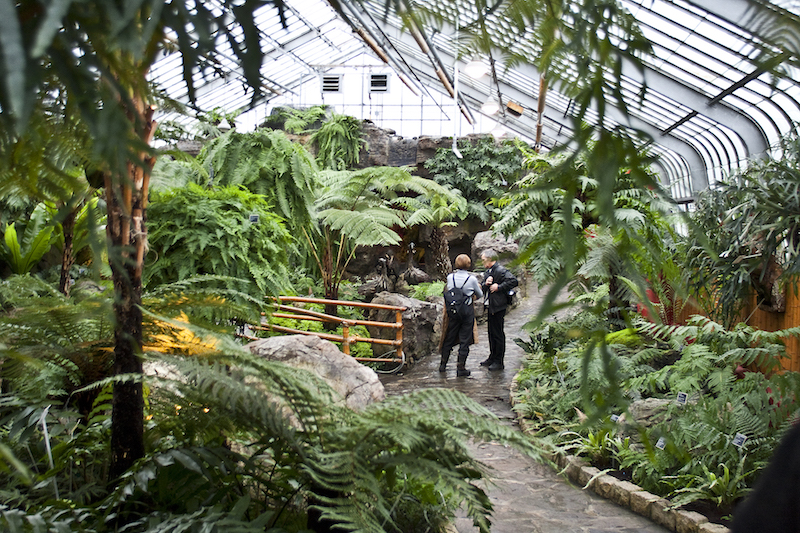 Ten exhibition greenhouses replicate a wide range of climates and contain a tropical rainforest and collections of orchids. Each season has its special exhibits. Near Halloween, mysterious tombstones appear among the cactus, giant paper bats may fly overhead and school children bring their most fantastic jack-o-lanterns to display. At Christmas one large greenhouse is turned into a holiday fantasy world of plants.

After the close of Expo ’67, Île Sainte-Hélène and the artificial island of Notre-Dame became Parc Jean Drapeau and the site of a number of family attractions. The Biosphere, the world’s largest spherical building, is now a museum dedicated to the environment. La Ronde Amusement Park is the largest in the province of Quebec, with more than 40 rides and attractions. The sandy swimming beach has rentals for kayaks, canoes and pedal boats to use in the quiet waters of the island’s lake. Parc Jean Drapeau is only five minutes from downtown and you can get there on the Montreal Metro.

The St. Lawrence gives Montreal a wide “front yard.” Along the river by Old Montreal is a wide promenade, a green park with sidewalks and benches where people sit to watch the boats on the river. This waterfront is always a good place to find activity. Thrill-seekers can take Jetboat rides over the Lachine Rapids, and other boats cruise up and down the river. Nearby is the dock where ferry boats leave to cross the river or go to Île Sainte-Helene; it’s fun to take the ferry over and back just for the ride.

The waterfront also has an IMAX theater, with movies on a huge wraparound screen seven stories tall. In Parc Bassin Bonsecours, on the river by the Bonsecours Market, children and adults often fly kites and in the winter there’s an outdoor skating rink.

At the other end of the city, the 8.5-mile Lachine Canal was built in 1825 as a way of getting around the Lachine Rapids, and now forms part of a park. You can take a cruise on a canal boat, ride on the bike path that follows the canal, or pick up provisions at the colorful Atwater Market and enjoy a picnic in the park.

There may come a time when little kids start looking for a little more adventure from theme parks. While Magic Kingdom and Sesame Place are always fun, the kids might seek the adventure bigger theme parks offer.

As a fan of train travel, I often choose a ride on rails over a drive or flight, especially in Europe, where I always relish the high-speed trains. In Tokyo, I once appreciated a speedy, efficient and easy-to-understand experience; but, speed isn’t the only appealing aspect of train travel. From Venice to London, on the Venice Simplon Orient Express, we traveled through the coastal cliffs of the Cinque Terra and dined in formal opulence; from Whistler to Vancouver on the Rocky Mountaineer, we sipped tea while viewing the spectacular scenery.

While considering dreamy destinations for a romantic rendezvous, Hôtel Hermitage Monte-Carlo immediately came to mind. I convinced my late husband, Bob, to take me there after a solo trip to Monaco (via helicopter from Nice-Cote d’Azur) on my first trip to the South of France. Our stays together left such an indelibly delicious memory that I’ve returned multiple times, including in 2018 and 2019. It’s a venue I recommend at any time, especially Valentine’s Day.

When considering a new destination for your family’s vacation list, solo trip, romantic getaway or just something to watch between trips, this list of wanderlust-inducing films should help. Watch a few of the family-friendly options with the kids and make it a movie night: