With Europe’s coastline measuring a whopping 24,000 miles, it’s not surprising Europeans are fascinated by the sea and its creatures. And as global warming causes rising ocean levels, there is increasing attention in coastal countries to the wide-ranging impact of the sea. Five outstanding aquariums offer children and adults a glimpse into the sea, its creatures and its effect on our lives.

One of the two largest and the most architecturally stunning is Felix Candela’s Oceanografic, the most complex site in Valencia’s magnificent City of Arts and Sciences. Nine different structures house its varied collections, and its immense exhibition tanks hold more than 11,887,742 gallons of water.

In the Temperate and Tropical Seas pavilion, visitors walk right through one of the tanks inside a 230-foot-long transparent tunnel, as sharks, beluga whales, manta rays and other species swim and feed above and around them. It’s an unforgettable experience for everyone, especially for kids. The multitude of buildings allows the oceanarium to re-create environments of nine different marine ecosystems, from the Arctic to jungles and mangrove swamps that house more than 45,000 examples of 500 different species. 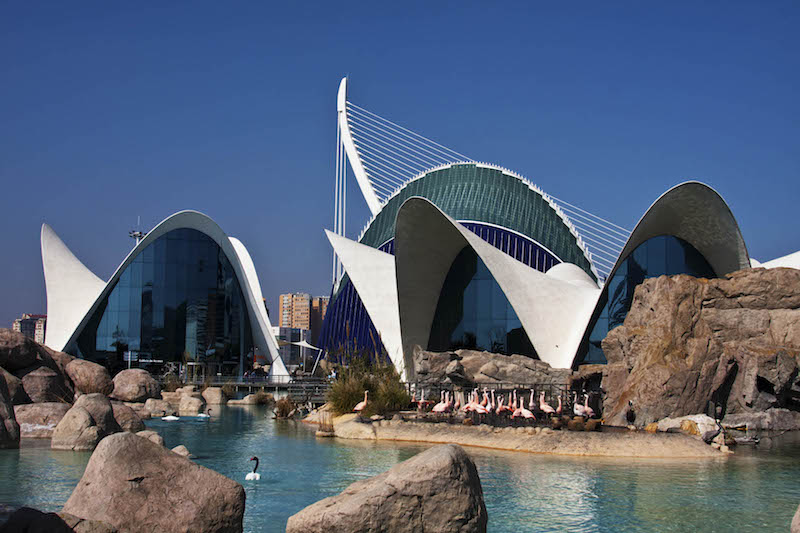 Although its total water volume is only about half of Valencia’s, Nausicaá has Europe’s largest single display tank at a whopping 2.64 million gallons. This tank has Europe’s largest viewing panel as well, more than 65 feet long. The 1,600 species living in the aquarium not only tell the story of the world’s oceans, but examine how they relate to the future of humankind. Kids especially like the immersive experience created by new technologies, a 60-foot transparent tunnel and theatrical productions that make them feel like they are exploring the high seas themselves.

The experience is a tour of the world’s seas and their shores, exploring the North Sea, the Mediterranean, the tropics, the Californian coast and more. Different exhibition areas house and teach about sharks (they live in a special aquarium of their own) and include a penguin beach, a coral display, a tropical forest, a submerged forest and other ecosystems. Nausicaá is only a few miles from the city of Calais, on the English Channel.

Lisbon’s Oceanário, like Valencia’s Oceanografic, is housed in an architectural landmark, a building that seems to float above the water and is entered by a drawbridge. At the heart of the building is a 1.3-million-gallon square tank, with gigantic windows at all four sides so visitors can view the contents from two different levels. Smaller windows give up-close views of areas where small fish and other creatures stay out of the way of larger ones. A theater presents programs on ocean research and exploration, and the building is filled with beautifully designed smaller display tanks spotlighting various species and environments. 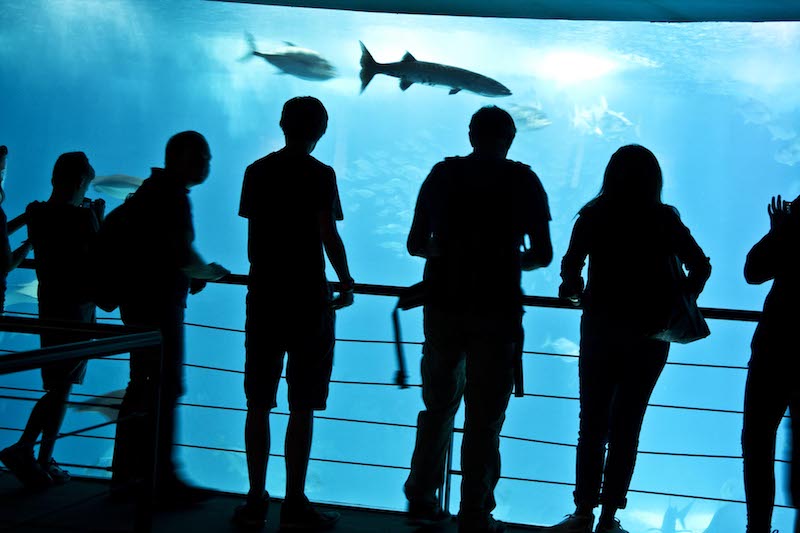 Among the more than 450 different species are sharks, rays, sea otters, penguins, a large oceanic sunfish and a giant octopus. Oceanário is in the Parque das Nações district of Lisbon, an area built for Expo ’98, and its entrance fee is more budget friendly for families than most other major aquariums.

The largest aquarium in northern Europe, Den Blå Planet (The Blue Planet) is surrounded by water, giving visitors the illusion of being in the sea. The building’s unique spiral design allows each of the 50 aquariums and display areas to be viewed from above or at underwater level.

The largest is the Ocean Tank, which holds more than 1 million gallons of seawater where hammerhead sharks, moray eels and barracudas swim. Brilliant tropical fish swim through a world of fantastic coral shapes and colors, and the Amazon gallery recreates an entire rainforest ecosystem from the water below to the treetops, alive with bright birds and butterflies. Den Blå Planet is 15 minutes by train from Copenhagen.