Explore Cascais, Portugal, With the Family

When I visited Lisbon for the first time, with my daughter Jen — attending the first Web Summit in the city — locals suggested we visit Cascais, but we couldn’t fit it into our schedule. We promised to go there on our next trip; I did, three times, and, hopefully, we both will soon and together.

Cascais is a coastal community that evolved from a historic Portuguese fishing village to a summer seaside retreat for Portuguese nobility, who built ornate 19th-century villas and mansions there. The current swank suburban residential community is also a resort destination that lures lots of European and American visitors, retirees and second-home owners. One of its major attributes is its proximity to Lisbon’s city center, reached by train in 33 or 40 minutes, or by car, to the city and airport in thirty-odd minutes.

For my first return to Portugal, I purposefully booked my TAP Air Portugal flight to arrive two nights before my friends and planned to visit Cascais during my free time, alone. I arrived, checked into the hotel, took a taxi to Cais do Sodre railroad station (opposite the wonderful Time Out Market, Mercado da Ribeira), paid about $3 for the train ticket and sat at the window facing the coastline. Within the hour, I was strolling the labyrinth of alluring, cobblestone alleys, which lead to the seafront, where I settled in at an outdoor café, listened to a strolling guitar player, watched the quaint fishing boats in the harbor and lunched. Fortified, I strolled the narrow streets lined with little shops and cafés and followed the arrow directions on signposts to various beaches. 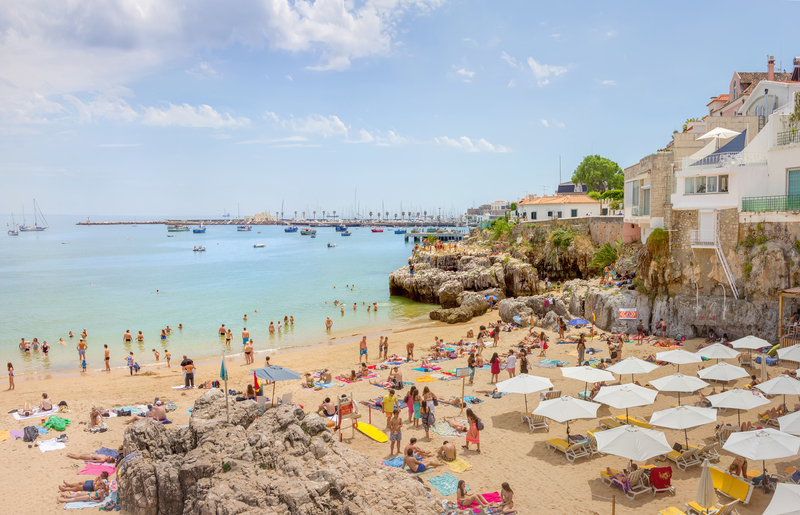 Praia da Ribeira faces the fishing boats in the harbor and the fort. And, both Praia da Conceicao, closest to Cascais, and Praia da Duquesa, the main beach, are suitable for families and for kids. There are lifeguards, smooth sand, calm and clean waters, but no waves. The Piscina Oceanica Alberto Romano is a sea-filled swimming pool ideal for little ones. There’s also a coastal promenade that I saw from the train; in fact, it stretches through Cascais and all the way to Estoril. Though I didn’t see it the first time I visited, the beachfront north of Cascais has a wild and dramatic coastline and leads to Guincho Beach, a surfing haven, in the Parque Natural de Sintra-Cascais.

Beyond the beaches, there are fascinating places on the waterfront that reflect the town’s history. The 16th-century Fortaleza de Nossa Senhora da Luz dating from 1594 is part of the citadel complex overlooking Cascais Harbor. The adjacent Citadel of Cascais, which the royal family maintained as a holiday residence in 1871, has transformed into the Cidadela Art District, an innovative cultural center designed by Group Pestana, which has repurposed historic buildings throughout Portugal into hotels (pousadas). There’s also a Lighthouse Museum, the Farol Museu de Santa Marta and a seafront palace built in 1900. The Castro Guimaraes Museum is surrounded by Parque Marechal Carmona.

When my colleagues arrived and asked where to visit outside the city, I suggested Cascais. Within minutes, we were at the concierge desk at the Tivoli Avenida arranging for a driver.

Much to my delight, the private tour included a couple of hours in Sintra, the magical hillside forest studded with palaces and castles that royalty had built to escape the summer heat. From the drive along the narrow, curved (and crowded) roads, we could see the Pena Palace and the Castle of the Moors, plus mountains beyond the dense forest, and feel the magic. (It convinced Madonna to purchase a home there). We lunched in haute style on the terrace of Tivoli Palacio Seteais and then drove 20 minutes toward the coast to Cascais on the scenic route, where we stopped at the dramatic Cabo da Roca cliffs, thought to be the edge of the world in the 14th century.

In Cascais, we walked along the coast and stopped in to see the impressive Farol Hotel, where I subsequently stayed.

Daytrips from Lisbon to Cascais, the seaside resort, and to Sintra, the mountain resort, are popular. Both can be seen in a day; more time is needed to tour each venue in depth. It’s practical for a family to hire a car, but it’s an easy trip by train (each destination uses a different train terminal, so buy one-way tickets) and convenient to take a bus (or taxi) between the two. (A caveat: The 403 bus takes an hour, twice the time as the 417; yet, it’s 10 times more beautiful).

The zoo is the perfect place for children to see and potentially interact with wildlife. Whether your family is filled with animal lovers or you just need a good excuse to get out and about, here are some of the country’s best zoos for your next family adventure:

The mad bobbing of sunny yellow toy ducks vying for the finish line has become a popular community event and fun family activity around the world — with many events staged to benefit local or national charities. Event-goers “adopt” a brightly colored, numbered rubber duck, pop it into a water source (usually a river or a stream) and wait to see which duck crosses the finish line first. Winners typically are awarded a prize donated by a race sponsor, while proceeds from the duck adoptions go to benefit a specific cause.