Some families like vacations to include a little adventure. Others like trips to have big, bold, capital letter ADVENTURES the kids talk about for years, the friends ask about the second they see you and your family relives through photos and stories. These intrepid families may seek out these experiences on their own but some prefer to combine an element of practicality to their thrill seeking and find companies who’ve built relationships with locals, constructed the contraptions to hurl them through the sky safely and researched the area to bring it all to life between your laughter and screams. The following two such companies, one in Costa Rica, Diamante Eco Adventure Park, and the other in Mexico, AllTourNative, combine sustainability, cutting-edge environmental stewardship and the practice of bolstering the living conditions of the native population around them.

Our screams bounced off the jungle treetops hundreds of feet below as my husband and I plunged toward the deep sapphire ocean, side by side, for almost a mile on the longest zip line in Costa Rica. The 10-acre Diamante Eco Adventure Park includes five ziplines, a hanging bridge that dangles over a crocodile lagoon and a deceptively scary freefall jump. There are horseback riding trails and ATV adventures as well as an animal sanctuary. Located in the Guanacaste region of the country, one section of the park has a beach where families can kayak, stand-up paddle board and snorkel as part of their exciting day. 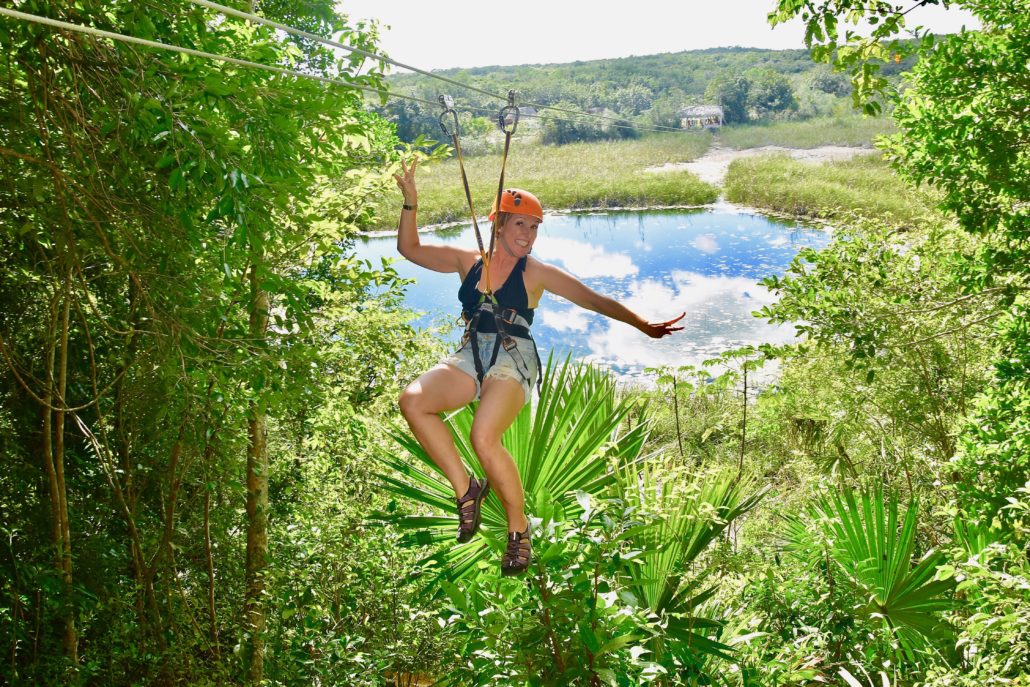 Diamante Eco Adventure Park combines its ability to stir your adrenaline with its desire to educate you while you’re there about wildlife native to the area as well as the people who live there presently and in the past.

Diamante has 19 animal habitats, the largest wildlife sanctuary in the area. Working with the government to care for animals that wouldn’t otherwise be able to survive on their own, owners Gina and Jim Correll partnered with La Paz Waterfall Garden to learn how to best tend to their rescued charges. The sustainable eco-park has gardens around their property growing food and the hope is to provide all the healthy stock the animals require to thrive.

The star of the sanctuary is Lucy, the sloth. Outside of Lucy’s garden enclosure, a naturalist explained to our group, gathered to watch her eat, Lucy sleeps about 20 hours a day and indeed she seemed too tired to bother to eat the proffered carrots. “Because of the moisture in the Guanacaste rainforest region, a layer of algae grows on Lucy’s fur and she’ll sometimes eat that, as well as the insects gathered within it, instead of coming down to feed herself.” It seemed Lucy was taking full advantage of all her resources. Then, we learned, “Lucy only comes down from her tree once a week to go to the bathroom.” As we processed this information, Naylah, from Florida, turned around and said the sloth was her spirit animal because she’s exactly like them. “Only, I go to the bathroom more than once a week,” she said.

A stroll down a path, between the other enclosures, brought us to frolicking ocelots and swinging capuchin monkeys. Gina Carrell told us one of the monkeys has a broken tail and we tried to identify him as they hopped around their rocks and trees. A short hike away, surrounded by designated plots growing the park’s greens, a cabin served to replicate for visitors what life was like back when the area was first settled and coffee and chocolate production began. An old world barista prepared coffee for us in the ancient fashion and we got to sample the varieties he also combined with chocolates. The process instilled within us a new devotion to Costa Rican coffee.

As we walked back to the trolley stop that would take us to the main building where we would eat lunch, we passed a ropes course we promised ourselves to try on our next visit. Lunch was a buffet of skillfully prepared local foods made with many of the plants growing around the park. The open-air restaurant perched above a jungle, with trees so thick it appeared we could walk across them to the ocean cove a mile beyond.

Visitors can come to only observe the sheltered animals for the $38 Discovery Pass. An Aerial Pass for $68 includes all the zip lines, including the longest one in Costa Rica called the Superman, as well as the crazy Quick Jump. You could do it all with an Adventure Pass for $98.

If you want to feel like Indiana Jones on a mission to discover the ancient Mayan people’s secrets, you’ll want to take the Coba Mayan Encounter Tour with AllTourNative in Mexico. Prices start at $111 but go up the closer you book to your desired tour date. They’ll pick you up from your hotel in Riviera Maya, Tulum or Cancun and drive you to the well preserved ruins of the lost city of Coba, a once thriving population of 50,000 that mysteriously disappeared.

Your first stop will be the pyramid of Ixmoja, part of the Nohoch Mul settlement in Coba. Coba’s claim to fame is the city’s stone walkways, called sacbes, uniting the various settlements and connecting them to the small cenote lakes they used as their freshwater supply. Sixteen of the discovered 50 sacbes are open to the public. You can choose to walk, rent a bike or hire a bicycle taxi for your short trek to the pyramid.

We rented bikes and peddled through the jungle canopy with sunlight filtering through dancing leaves. Earlier, our guide, Rebecca Vargas, told us only 5 percent of Coba had been excavated and only 1 percent was open to the public. The undiscovered sites could be seen as mounds of foliage around the jungle. As we biked, we spotted some of these grassy hills we were sure contained buried treasures. Our path passed through temples and other stone buildings, some with trees growing between the rocks, slowly reclaiming the old city. We stopped to admire a structure with stone hoops attached to its side, once used to play the Mayan game of pokolpok. “Most of the information we have about the Mayan people is theoretical,” Vargas told us. “Archeologists interpreted steles, which were stones with hieroglyphs used to make announcements to the people by the rulers, to reconstruct their entire history. These were just their best guesses.” She told us she wasn’t convinced the stone hoops were used as a game though other scientists think they were. Some of those speculate that many of the games ended with human sacrifices offered as a prize to the winners

When we arrived at the Ixmoja pyramid, we were stricken by the steep angle of the steps placed along the sides to reach the top, 138 feet up. We could see tourists of various sizes and ages scrambling in differing displays of grace to the top platform. Some of us decided to solely admire the site from below and some decided to go for it. A weathered rope strung from the highest point of the structure offered a semblance of security to the semi-daring adventurers. Many of the 120 steps up were more narrow than I expected and this presented a bigger challenge on the way down, but, on the way up, it was easier to angle my feet to deal with the restrictions. Adrenaline coursing, as I climbed each step, that varied between one to two feet in placement above the last, I realized the thinning air of our increasing elevation prevented the full breath I usually took for granted. My sweaty palms fumbled to hold onto the rope in areas that were particularly irregular. Because I had worked up such an inner fright about the ominous thought of the climb, I was surprised to arrive at the top so quickly. I was more surprised by the openness of the jungle land suddenly surrounding us. Miles and miles of green stretched out around us with the morning sun gamely warming us through the crisp air. We giggled through Instagram photos and the victory of accomplishment. 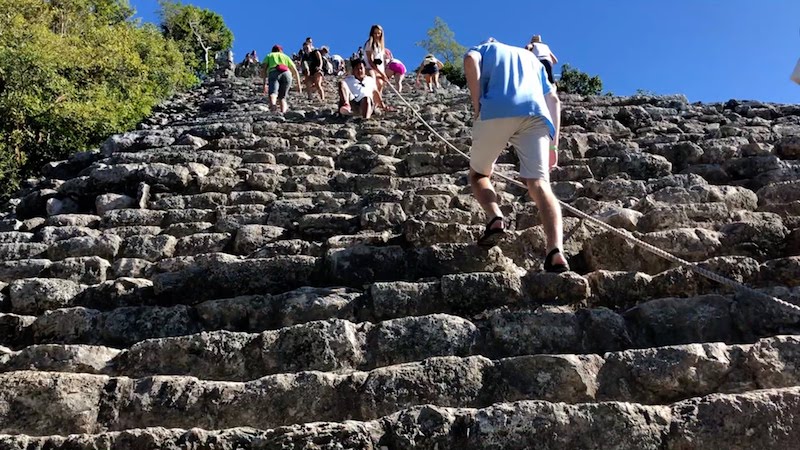 Our next stop was a visit to the Choo-Ha cenote. A cenote is a sinkhole created when water levels receded 300 feet after the last ice age. The suddenly exposed corals died and a jungle grew over the limestone. As some of them collapsed, underground, freshwater rivers became available to the land that has no aboveground rivers or streams. The Mayans also believed these sacred spaces were the dwelling place of their loved one’s souls. An ancient ritual with incense and prayers, recited by a modern, Mayan shaman prepared us for the journey. As we descended into the cavernous system, with the cave walls reflecting rose, blues and soft yellow hues, we could see why the Mayans believed these cenote were magical. We waded in the healing water, refreshing after our strenuous climb.

Vargas next brought us to a cliff and told us to step off after strapping ropes and a harness around our bodies. As I plunged into the open gully, jungle vines dangling around the hundred or so feet to the ground, a giddiness seized me as I realized how little supported me and how high I dangled. 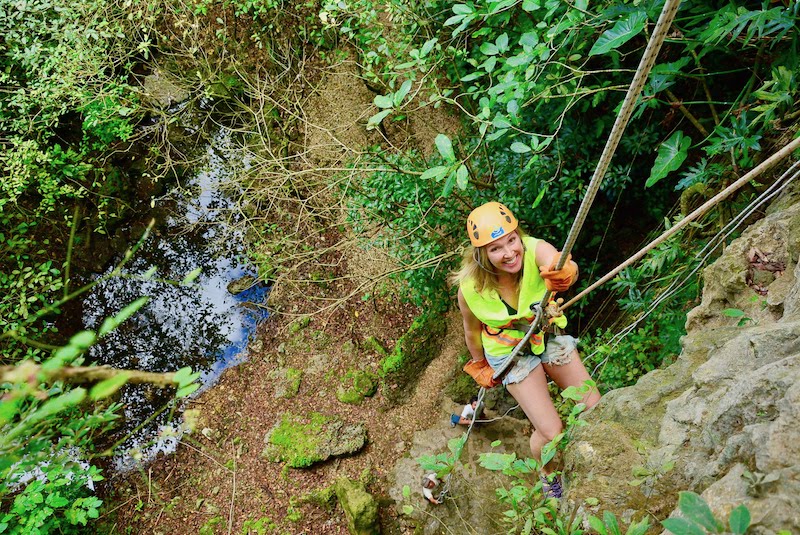 Our journey took us by kayak through another lake-like cenote to then zip line through the sky over reefs and lily pads to finally venture into the primitive village of Chimuch for lunch, prepared by the descendants of the Mayans we had spent the day trying to understand. AllTourNative works with five such villages to teach them skills beyond the sixth grade education provided by the government. It was the ancient Mayan offspring that fed us and it was their talented teenagers that took the photographs of our quest to remind us, for years to come, of our ADVENTURE.

The Ritz-Carlton Maldives, Fari Islands, opening June 1, introduces a collection of immersive ocean experiences through Jean-Michel Cousteau’s Ambassadors of the Environment Program and Fari Islands Collaboration. The property is situated on the northeastern rim of the North Malé Atoll of the Fari Islands.

Travelers are ready for some rest and relaxation this spring break. Travel insurance company Allianz Partners surveyed travelers on their upcoming spring break travel plans. The study found Florida to be the top domestic destination. Mexico took the top spot among international destinations.

What to Bring on a Last-Minute Road Trip

Planning a quick getaway seems so stressful for people who love to know the what, when and where of every trip. Packing your bags for a weekend getaway can be simple if you just follow these tips.

Everyone is itching to get back to travel. Travelocity is making that step back into exploring easier with its Early Bird giveaway, offering winners of an online contest a chance to win a $1,000 vacation package voucher.

Holding on to travel memories can be hard for younger travelers, whether they travel a lot or only once in a while. There are many ways to keep memories alive, like telling stories, looking back at pictures or having a keepsake for the kids to have for years to come.