Costa Rica With the Family

Nothing in the world can bring a person into harmony with themselves and others than the tuning fork they’ll find in nature. Costa Rica hosts 12 different ecosystems to find the perfect balance between layers of earth, forest and water which hold the secrets to connection and happiness.

In this first of the three ecosystems we explored in Costa Rica, my husband, Howard, and I started at a high point in the country, the Cloud Rainforest at The Peace Lodge, about an hour’s drive from Juan Santamaria Airport in San Jose. Along the way, we stopped at Doka Estate, a 470-acre coffee plantation. The richness of the soil around the rainforests, also locations of active and dormant volcanoes, provide the best nutrients to grow both coffee and chocolate. There are tours available but we got there in between start times so, instead, we sampled each and bought a few things to take home.

We also stopped for a light lunch on the way up the mountain at La Casona de Dona Julia. Tucked between swaying hills and surrounded by a spacious lawn, perfect for running children, the restaurant had the best, nutty-flavored, cinnamon-spiced horchata we’ve ever tasted. Not too sweet. We were both excited to try real Costa Rican food and the restaurant satisfied that desire with fresh plantain chips and tortilla chips with sides of beans, salsa and guacamole to dip into. Another plate of cheese, eggs and rice mixed with beans rounded out our introduction.  At the table next to us sat a couple friendly ladies, who, we learned, were sisters, Elizabeth and Priscilla. After talking across tables for a bit, they asked if we wanted to join them. Priscilla had spent her life in Costa Rica. She said their father had done well as Costa Rica’s first male gymnast and started the wellness movement in their country. Elizabeth moved to Miami, where she met and married the “love of her life,” who passed away 11 months ago. “Some people live their whole lives not knowing what it’s like to be loved,” Elizabeth told us with glistening, downcast eyes. “He always told me,” she said softly. “He wanted me to know.”

When we arrived at the Peace Lodge, I realized visiting a rainforest meant I should have brought warmer clothes. It wasn’t freezing, but it was cool and damp. Every once in a while, there would be a downpour of rain dousing the rich carpets of green leaves and puffy, moss-colored trees around the mountains of the Poás Volcano and the La Paz River Valley. The resort is built into the mountainside and spills into the valley. Visible from the balcony of our deluxe room, the Poás Volcano is one of six active volcanoes in Costa Rica boasting the largest open crater in the world, at more than one mile across and 1,050 feet deep. Lazy clouds floated between arches of surrounding hills. Our generous balcony held a stone hot tub on one end, a hammock on the other and a small table to enjoy a book or a meal with chairs set on rockers.

The room’s interior could have been designed by the indigenous people who first walked the rainforest, it blended so well into the landscape. Earth-toned colors, primal artwork, a four-poster canopy bed with draped mosquito netting and a stone fireplace with a couch across, traced in the same polished wood that graced the entirety of the 800-square-foot room. The real magic, however, lay in the garden bathroom, a natural extension of the forest outside. Tropical plants growing around the valley also grew around the ceiling and walls at the far end of the circular bathroom, the size of a New York apartment. Around the perimeter, two waterfall showers and a private toilet, two painted, porcelain sinks all crowned by the stone bathtub with a rock waterfall, to be turned on with a twist of round, stone knobs with carved, painted frogs, jets streams spiking hot, healing water inside. This little oasis drew us to it multiple times each day. There’s nothing like lingering around a warm, jungle tub, catching up on all the things our busy, parenting lives cast to the side.

The Peace Lodge opened three years after the surrounding La Paz Waterfall Gardens Nature Park was built. The owners of both, Lee and Cindy Banks, used every means possible to build responsibly, hauling each piece of material manually rather than take the chance of ruining the surrounding environment by using cranes. Not one tree was cut, not one vine system damaged in the building of any portion of the properties. The 70-acre private nature park has more than two miles of paved trails cutting across various elevation levels that lead to five waterfalls, an aviary, a hummingbird garden, a butterfly observatory and various, high-end animal enclosures. The park is open to the public every day from 8 a.m.–5 p.m.,  but guests of the lodge can visit anytime.

We took a tour of the jungle frog habitat, whose nocturnal lifestyle limits their appearances to after closing time. The staff was so accommodating when I asked where we should meet our guide, they told us he’d come to our table when we finished dinner at the hotel restaurant, Vista Poás. We also took a daytime tour of the waterfalls. As we descended into the valley, the light faded under the canopy of trees. The viewing platforms took us so close to the falling water, we felt the air pushing us back. We held each other against the wall of rushing sound. It started to rain and we saw visitors scurrying up and down the stairway trails with giant leaves covering their heads. When I asked our guide what the plants were called, he answered, “poor man’s umbrellas.” 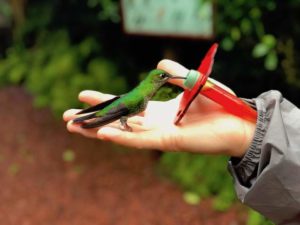 After this, it cleared up and we took the second part of our tour, a visit with the animals in the sanctuary who were all either confiscated from poachers or rescued by the government and entrusted to the care of the park. Every animal looked healthy and happy, darting around their spacious, lush homes. In many cases, the animals weren’t in cages at all, just confined to a huge, netted garden and some, like the hummingbirds, were still wild, only visiting during feeding time. The highlight was when I fed a toucan with a pellet wedged between my lips. Howard’s favorite was when we held bright red feeders and various hummingbirds, decked out in their sequin best, ate from of our hands. Both times I felt like a Disney princess and wanted to break into song, the experience was so dreamy. It was one of the many times, staying in this cloud forest, that I caught the eye of my prince and saw him feeling exactly the same way.

If you bring the kids: On one end of the La Paz Waterfall Gardens Nature Park is Upper and Lower Trout Lake. Fishing poles and a guide are available to practice catch-and-release tactics or transform your efforts into a fresh dinner! The two-leveled lake is fed by a running spring and rainbow trout are stocked monthly. Big Trout Restaurant and Bar is open for dinner and lunch and you can jump into the cool lake, then warm up in the hot tub.

If you bring the grandparents: Various levels of trails and stairs connect all the rooms and restaurants of the resort. This could present a challenge for older folks or those who have a harder time walking around. At the bottom of the property is Villa Lago, a three-bedroom, two-bath spacious apartment with a full kitchen and two entrances. A golf cart is available to transport those that would prefer to ride between activities and the Big Trout Restaurant is only 75 feet away on the same level.