Get Your Family’s Fill in Philly

It’s almost easy to pass by cozy ITV, a craft cocktail and shared-plates concept in an up-and-coming Philadelphia enclave with small boutiques, art galleries and funky bars most out-of-towners compare to Brooklyn.

Easy to pass by, that is, unless you’ve done your research. It’s here Top Chef winner and Massachusetts native Nick Elmi will pop back and forth between the bar and Laurel next door. The 22-seat gem’s mind-blowing and mouth-watering seven-course tasting menu is bringing acclaim not only to the neighborhood, but to other non-native toques like him drawn to Philadelphia’s less expensive rents than other East Coast cities, charm and abundance of one local product: mushrooms.

If you can catch his apron strings on a buzzy Friday night, he’ll tell you his wife Kristin often reined in his zeal for all that is stuffed, foraged and commercially harvested less than an hour away in Kennett Square. It’s here in this sleepy town of just 6,000 residents and about three square kilometers that more than 60 percent of the country’s mushrooms are grown — about 1 million pounds a day. What does this mean for Philadelphia foodies? Lots of options, but especially inventive cuisine fit for vegetarians and meat eaters alike at plant-based restaurants like Vedge from James Beard-nominated chefs Rich Landau and Kate Jacoby.

It also means those taking an easy romantic weekend getaway can get their fill of rich cuisine, rich history (including the shiny new Museum of the American Revolution) and scenery pretty easily. Whether you choose to spend the whole weekend in the city or venture further out into the epicenter of one of the country’s few crops harvested year-round, there’s plenty to see, imbibe, savor and delight.

An easy direct flight from most East Coast cities, it’s easy to rent a car or get an Uber into Center City. Check into hotels like Kimpton Palomar and you’ll find plenty of shopping options, walking-distance proximity to sites like the Liberty Bell and the Constitution Museum or gems like Dizengoff hummus palace or Federal Donuts, a snackery waiting with coffee and pastries or fried chicken. Both come courtesy of James Beard Award-winning chef Michael Solomonov, whose Zahav brought attention to Israeli cuisine and, like Laurel, is another reservation worth making months in advance. 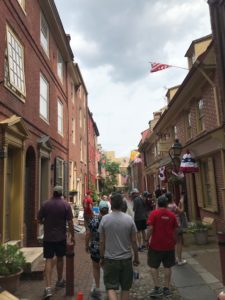 Walk off some lunch calories with a History in HD tour courtesy of Philadelphia Urban Adventures and get a comprehensive overview of neighborhoods and historic sites to hit up later. It concludes with a free locally brewed beer, and you can extend the fun on Friday and Saturday summer evenings at Admirals Tavern, a pop-up beer garden on top of the retired Olympia warship at the Independence Seaport Museum. Drinks on the Deck features Levante, Broken Goblet brewing companies and more, along with musical entertainment and tarot card readings.

Find fun in your future with a daytrip starting early on Saturday to Kennett Square. You’ll escape the hustle and bustle of the city for greener pastures — literally — getting a peek at how mushrooms are grown, harvested and revered at the Woodlands at Phillips Mushroom Farms, where a small museum has been cultivated by the owner-sisters. Jill Gray will also walk you through a gift shop with cookware and products like the high-protein blended burgers, along with telling you about cooking lesson opportunities, the annual mushroom festival every September in the heart of town and the New Year’s Eve ball that drops in, yes, the shape of a cap.

Pick up a few more souvenirs, soups or sauces at the Mushroom Cap shop downtown, or grab a chair for a feast of what’s been picked fresh that day courtesy of chef Brett Hulbert at Portabello’s across the street. Whether it’s an omelette, crepe or soup, even those who squirm at the thought of fungus will soon salivate over his plans with wife/partner Sandra Morris to move their space to a larger one a block over.

Longwood Gardens may not plant mushrooms but the Bellagio-style fountains and dazzling horticultural displays are like Willy Wonka’s factory for the eyes, along with the stunning Italian-style garden, waterfalls and “treehouses” for kids to climb. Seasonal fireworks shows are also worth planning a trip here at night, unless another dinner reservation lures you back into the city.

Little Nonna’s intimate garden seating in the heart of Midtown Village keeps the green theme, especially if you’re looking for a mushroom-heavy menu that pays homage to your earlier adventures. The menu — along with an herbaceous cocktail list — rotates often, but savory arancini with local mushrooms and truffle aioli is a year-round favorite. Don’t miss out on truffles of another kind at Verde, where a chocolate studio is tucked into a boutique owned by chef Marcie Turney and partner Valerie Safran. Besides Nonna’s, their mini neighborhood empire at 13th Street includes restaurants Lolita, Jamonera, Grocery, Barbuzzo and Bud & Marilyn’s—plus the Open House home store and combo chocolate shop. 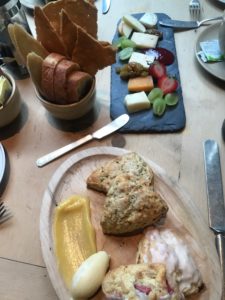 Outside seating is in at Talula’s Garden, too, where owner Aimee Olexy brings farm-to-fork cuisine into the heart of the city (she also has a Kennett Square outpost, too). Rest up Saturday night before a serious brunch at Washington Square — or sleep in and simply stop by Talula’s Daily, an all-day café, market and secret supper club.

For all its historical charms, Philadelphia’s got some exciting developments, too, not the least of which are new or recently renovated hotels. Drexel, Temple and University of Pennsylvania all bring a youthful vibe to the City of Brotherly Love, as does a new skyline punctuated by accommodations like AKA University City. While it’s not the most ideal for those trying to get around on foot, the Jetsons-like city in the sky offers up hotel rooms, condos, entertainment, dining (Walnut Street Café) and floating (in the form of a sexy swimming pool on the 28th floor). Buy a day pool pass and you’ll be floating literally and figuratively after a weekend of culinary food for thought.