How to DO A.C. With the Family

Sure, we’re barely dipping our toes into winter weather, but isn’t it more fun to think ahead to the warm weather family fun your crew could have at the Jersey Shore? Luckily, Atlantic City, New Jersey, offers far more than sandy beaches and casinos — enough to entertain all ages in all sorts of weather.

Use this list to “Do AC” with the family, year-round:

Whether visiting with future marine biologists and animal lovers or the kids need a break from the beach and boardwalk, Atlantic City Aquarium is a great stop. With interactive exhibits for all ages, the aquarium is home to more marine life than you’ll be able to name, as well as land animals in the Tropical Rainforest.

For any fan of HBO’s Boardwalk Empire, you already know Atlantic City is loaded with history. If you need a visual, head to Absecon Lighthouse. Also known as Old Abbey, the lighthouse stretches 171 feet high and is one of the tallest in the country. Built in the 1850s (designed by Civil War General George Meade) Old Abbey is a must-visit for families seeking a picturesque photo with the family — not to mention, it’s a stop for local ghost hunters.

Enjoy theme park fun with the kids at Storybook Land. With a 60-year history and 20 acres of land, Storybook Land boasts rides, parades and a slew of events for all ages, including car shows for adults. 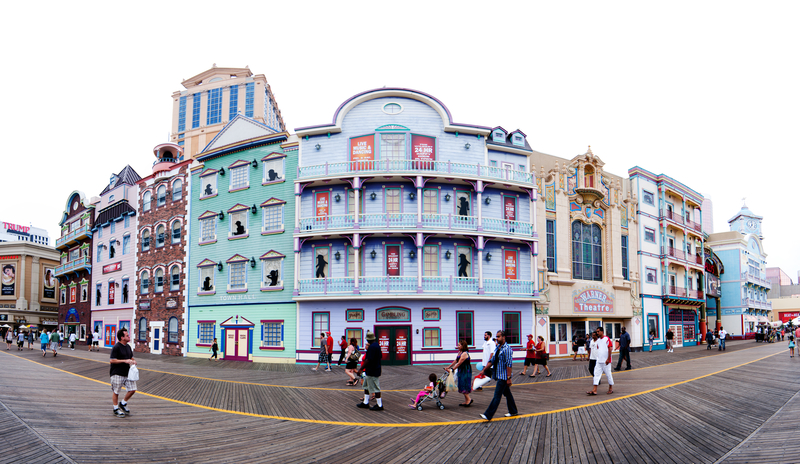 Atlantic City’s four-mile-long boardwalk was built in the 1870s and, while changed over many years, boasts endless shops, arcades and amusement for all ages. Visit antique and jewelry shops, or escape the weather in the arcades for all-ages claw machines and video games. During the summer months, expect a healthy lineup of carnival games lining the boardwalk. Branch off to Steel Pier and Central Pier for even more entertainment.

Another warm-weather activity, but one the kids will love, bring Monopoly to life while visiting real-life squares in Atlantic City. The city’s real streets and locations that inspired the game back in the 1930s may have changed a bit, but there’s still a lot of stops to make — you’ve already hit the boardwalk so you might as well see Park Place.

Sesame Street has been a popular TV show for young children for many years. Bucks County, Pennsylvania, is home to the only Sesame Place amusement park. Now, kids on the West Coast are able to experience the excitement of watching beloved TV characters come to life at Sesame Place San Diego.

Fun for All at the Phillies Game

Baseball season is in full swing and there is still plenty of time for fans to catch a game at Citizens Bank Park in Philadelphia while cheering on the local favorite, the Philadelphia Phillies.

The highly anticipated, 5-star, all-inclusive Nickelodeon Hotels & Resorts Riviera Maya rolled out the orange carpet in early August as the ultimate family-friendly destination. Nickelodeon’s slimings and characters meet Karisma Hotels & Resorts’ unmatched hospitality. During the fall opening period, rates start at $259 per person, and can be booked through Aug. 31, for travel through Jan. 4, 2022.

When traveling with kids, a lot of factors come into play to ensure happiness and interest. The Family Vacation Guide researched Tripadvisor’s traveler reviews to determine the Top 100 Cities in the United States. Consider these cities when deciding where to vacation. From kid-friendly places to eat, hotels, attractions, ease of navigation and access to options, here are the top 10-ranked cities for kids according to real, family travelers’ reviews.