Immerse Yourself in History in Bath

Steam rises in dense clouds from the surface of the hot mineral water, causing the spires and sloping rooftops of the city to disappear, then reappear. This hauntingly lovely view of the historic English spa town of Bath is possible because I’m neck-deep next to my husband in a pool open to the sky, located on the top floor of the glass-walled, multilevel Thermae Bath Spa complex. The pools are fed by the same legendary spring that inspired the Romans to construct a spa facility here 2,000 years ago.

The mostly-intact Roman baths are located just next door. Unlike its historic counterpart, the Thermae center offers a host of therapies and spa experiences that range from bamboo massages and Moor mud wraps to sojourns in aromatic chambers and steam baths featuring peat, lavender blossom and Alpine hay.

While the Thermae Bath Spa center is a decadently modern contrast to the Roman facility, there’s a fascinating blend of history and myth surrounding Bath’s celebrated spring that offers a watery connection. Tales tell of the banished nobleman-turned-swineherd Prince Bladud, who suffered from leprosy, stumbling upon therapeutic waters flowing from a mineral-rich spring as he wandered through the countryside with his drove of pigs. Bladud’s pigs, which also suffered from leprosy, immersed themselves in the mud surrounding the spring, and were cured. 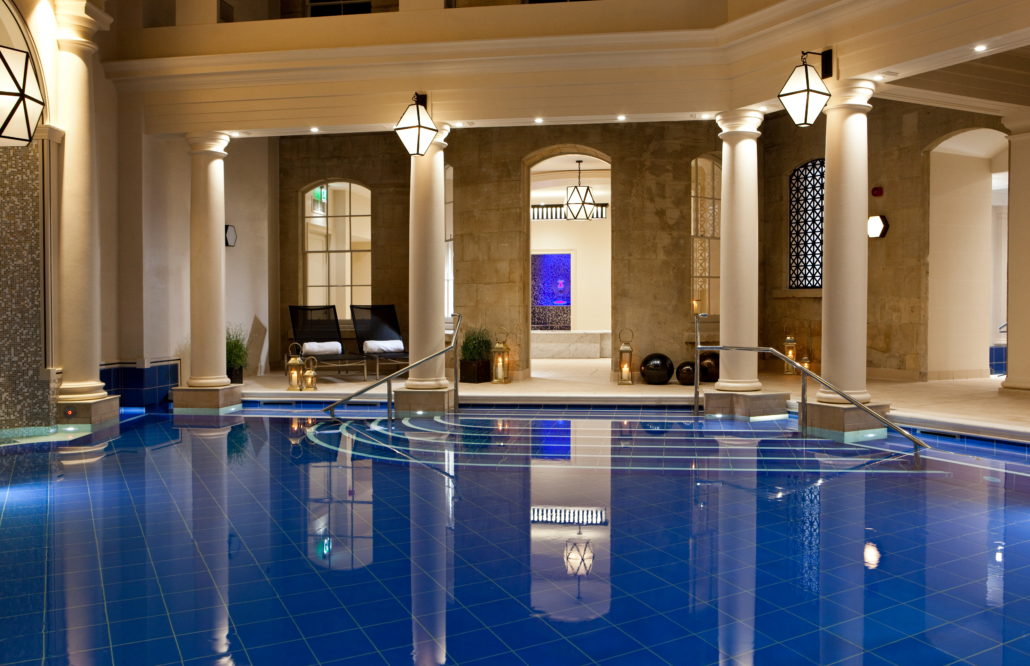 Witnessing this apparent miracle, Bladud also bathed in the hot, watery mud from the spring and was cured of his ailments. He went on to become king — and, as legend tells, father to Shakespeare’s King Lear — but not until he’d established a city at Bath and dedicated the healing spring and its curative flow to Sul, a Celtic goddess. The word spa derives from the Latin phrase sanus per aquam, which means “health through water.” While the exact source of the spring remains a mystery, the waters have been analyzed to determine their content and found to contain 42 separate minerals, with significant amounts of sulfate, calcium and chloride.

When the Romans arrived in the area about 900 years later, they renamed the city Aquae Sulis, and built a decorative temple of pools, steams and saunas silently watched over by tall stone statues. For the Romans, the rich, curative waters were a welcome respite to battle-weary muscles, as well as a serene setting for socializing.

During every visit to Bath, the Roman ruins are the first place we visit, a useful tool in grounding both my husband and myself to the powerful healing atmosphere that still lingers among the old pools where the restorative waters continue to flow to this day. Among the detailed carvings and inscriptions on display in the museum are artifacts that date to the days of the Roman occupation, including mesmerizing glimpses into the lives of the ancient bathers that include notes left at the baths with pleas for the return of lost personal items such as earrings and sandals.

Our accommodations at the elegant Gainsborough Bath Spa hotel are steps from both the Thermae Bath Spa and the old Roman spa. The hotel is unique in this ancient city because of its own vast underground Spa Village. The same tonic waters so beloved by the Romans (and Bladud’s pigs) feed multiple pools. The water in the pools is of varying temperatures, augmented with a steam bath and sauna just as the Romans would have enjoyed, plus a lavender ice alcove. 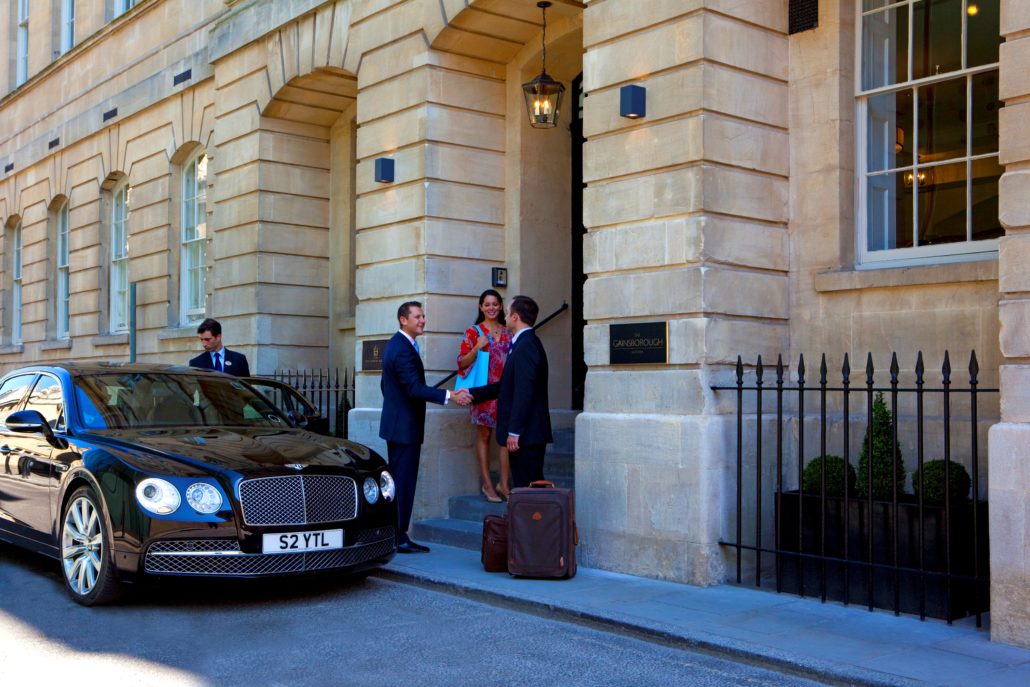 The hotel itself is made up of two connected Grade II Listed structures, one distinctly Georgian, the other unmistakably Victorian. A total of 99 luxurious rooms and suites can be found within, decorated in a supremely soothing color palette of watery blue-grays created by New York-based Champalimaud Design. In some guestrooms, the baths are fitted with a third tap that dispenses the same hot, mineral-rich waters that fill the Roman pools and feed the Thermae Bath Spa.

Our wellness journey in Spa Village began with a session at the Aroma Bar, where our therapist had us select from a collection of pure essential oils, then fashioned bespoke salt infusions in small mesh bags carried with us into the steam and sauna, periodically breathing in the scent as we enjoyed the hot spaces. The therapy menu is vast, and includes a selection of aquatic massages. While my husband made repeated circuits of the pools, steam and sauna chambers, I chose the Freedom therapy, an underwater Watsu massage.

I’d chosen the treatment because of the unique aspect of being fully submerged, but had a few trepidations once I was actually in the water. I needn’t have worried: In decades of sampling spa therapies around the world, the underwater aspect was truly the most relaxing and liberating I’d ever tried. Throughout the experience, my therapist supported me and let me know before my head would be underwater. Allowing myself to fully trust in the process gave me the freedom to absolutely immerse in the sensory aspects of the experience, which included underwater Shiatsu and massage. For days afterward, I felt centered and serene.

Before catching our train back to London, we had time for a stroll through the streets of Bath. Now a World Heritage Site, the city was once the home of author Jane Austen, who set two of her novels within the local landscape. Walking past the Jane Austen Museum and wandering toward the Parade Gardens, we noticed something new since our last visit. As we drew closer, we saw a statue added to the gardens — a tall man standing next to a large pig. It was a moment before we realized it was King Bladud himself and one of his wise swine, to whom we are both eternally grateful for discovering the hot, fragrant springs that have given us such pleasure over the years.

3 Spots to Experience Wildlife in India

India boasts so many incredible sites, from the Taj Mahal and Hawa Mahal to the Red Fort and Humayun's Tomb, it can be easy to overlook the magnificence of the country’s natural beauty and wildlife in an attempt to fit in as many landmarks as possible.

Practice Wellness with the Family at Carillon Miami Wellness Resort

Incorporate wellness into your next beach resort escape at Carillon Miami. The Carillon is both a family vacation destination and a dedicated wellness facility with full-service, beach-front resort amenities within a splendid apartment/hotel on Collins Avenue in Miami Beach. It’s well-located on 68th Street, between the shops and restaurants at Bal Harbour.