Eastern Europe has come a long way in the last 25 years, and Belgrade is emblematic of the youthful optimism and energy that helped completely transform the formerly industrial and war-torn Eastern Bloc city into a colorful destination guaranteed to appeal to children and teens, from landmarks restored to their past historic glories to impressive museums, and a host of welcoming shops and restaurants with an emphasis on local products.

Even a 24-hour stay spent primarily on main drag KnezMihajlova and the side streets branching out from it makes for a satisfying day. The street, which begins at the end of Kalemegdan Park, may not be paved with gold, but it will delight the kid in everybody with an alluring selection of ice cream stores, coffee shops and bakeries tucked between big brand European chain stories. Walk a little further and you’ll encounter several emporium-sized retail spaces such as Gradstor Design Hub and Šmizla Vintage & Design Store encompassing kiosks and stalls selling handcrafted and vintage housewares, toys, clothing and jewelry. After 6 p.m., the selection of one-of-a kind items multiplies when artists start bringing out their paintings, sculpture and fashion accessories. In front of the Rajićeva Shopping Center, there are numerous street performers and DJ-fueled, all-ages dance parties keep the city going into the evening hours.

If travel plans allow for more days to explore, you’ll find there are several well-located hotels that capture the city’s exploding arts scene, such as the visually arresting Mama Shelter Belgrade at the top of Rajićeva Shopping Center or Hotel Tesla, with nightly rates going for a fraction of comparable hotels in Western European cities. One day, naturally, can be devoted to the city’s impressively diverse array of museums. There are a good number of them in Kalemegdan Park, including the esteemed Belgrade Military Museum, which impresses with its fleet of tanks and military vehicles. 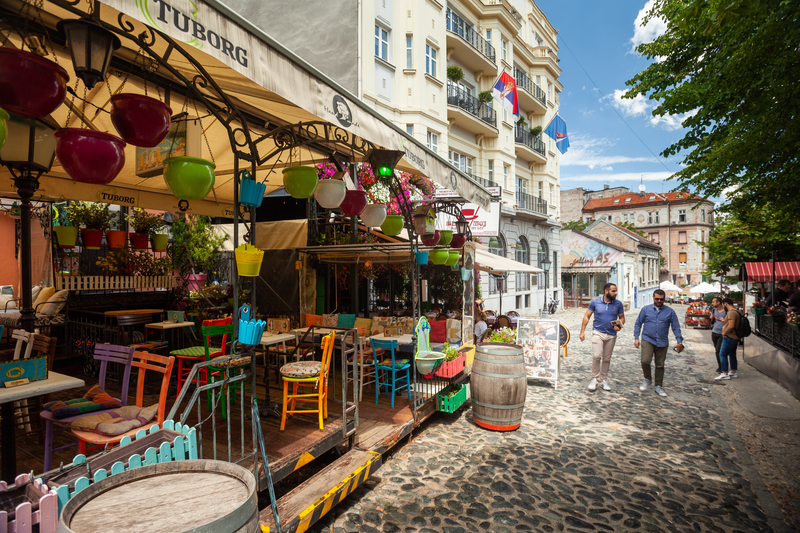 After covering the hills and valleys of the park, its smaller museums and its beautiful city views or at the sight of rain or snow, head indoors to the Museum of Science and Technology and Nikola Tesla Museum for interactive immersions into scientific wonder, or learn about magic at Museum of Illusions or marvel over cars at the Automobile Museum to compare and contrast how cars and transportation differed between east to west during the Soviet era and beyond. If time allows, head to the Aeronautical Museum-Belgrade near the Nikola Tesla Airport for a look at planes and related technology from past and present.

During the warmer months, Belgrade proves itself to be one of the most navigable cities by bike regardless of age or fitness levels. Several rental stations and tours originate along the docks of the Danube and Sava rivers, and bike paths are in the process of being restored or added to provide access to more parts of Belgrade. One of the most pleasant tours leads riders up and around the Sava River, through parklands and quiet residential neighborhoods toward Ada Lake, located on an island in the river. This scenic island, frequented by families on weekends and holidays, is lined with beaches, cafés and urban water ski park Aqua Ski D.O.O., just as entertaining for the spectators as it is for the daredevils giving the equipment a spin.

When it comes to trying out Serbian fare, one way to go traditional without going stodgy or old school touristy is at Bistro Grad Hometown Food, noted for its reasonably priced Balkan and Mediterranean plates. At this and other places in the city center, encourage your kids to sample a cheesy and flaky burek at most neighborhood bakeries (pekara), which sell them by the slice.