Major Must-Sees for the Family in Memorable Madrid

Madrid, with its old squares, broad boulevards, pristine palaces and magnificent monuments shows off dazzling architecture dating back to the shaded arcades of the 16th century, to shimmering white, early 20th-century buildings. The Spanish capital is family friendly, a city for strollers, with paths where children can run and enclosed playgrounds for toddlers.

The place to start is in the old city at Puerto del Sol, the grand central square, Spain’s kilometro zero, from which all locations are measured. The meeting places include the clock, the statue of the bear eating berries (the symbol of the city), the King’s statue and the front of the Apple store. From here, start a tapeando to various tapas bars for fun finger foods: patatas bravas (square Spanish fries with spicy garlic sauce), tortillas (potato-filled egg pie) and jamon ibérico, (thinly-sliced ham) or a churro (an elongated, sugared donut).

Nearby, Plaza Mayor, the main plaza in Old Madrid, built 1580–1619, is just a short walk. So is Botin’s, one of the world’s oldest restaurants, where pigs roast on an ancient spit and the incredible Mercado de San Miguel, where you can eat at food stands or buy take-away foods and gifts. El Rastro, the only-on-Sunday-morning market, is an enormous flea market through the old streets from Puerta del Sol through La Latina — great if you love shopping and don’t mind crowds; it’s not for kids who easily disappear. Also nearby, the Royal Palace illustrates the 18th-century Baroque style. Some might wow at its opulence; others at the royal armory, off the main entrance; youngsters might just be happy in the playground in the Campo del Moro park, behind the palace.

The historic Paseo del Prado is a beautiful, tree-lined boulevard, with a shaded, kid-friendly path down the middle from Atocha train station to the ornate, wedding-cake like Palacio de Cibeles, where the elevator leads to fabulous vistas from the rooftop terrace or restaurant. A half-mile section of the Paseo del Prado has been dubbed Paseo del Arte, because it connects the three museums in the Golden Triangle: Reina Sofia, next to Atocha, El Prado and Thyssen-Bornemizza; and, it passes two early 20th-century palace hotels — the regally restored Westin Palace Madrid, c. 1912 and Mandarin Oriental Ritz Hotel, c. 1910 (undergoing renovation for a summer 2020 launch). 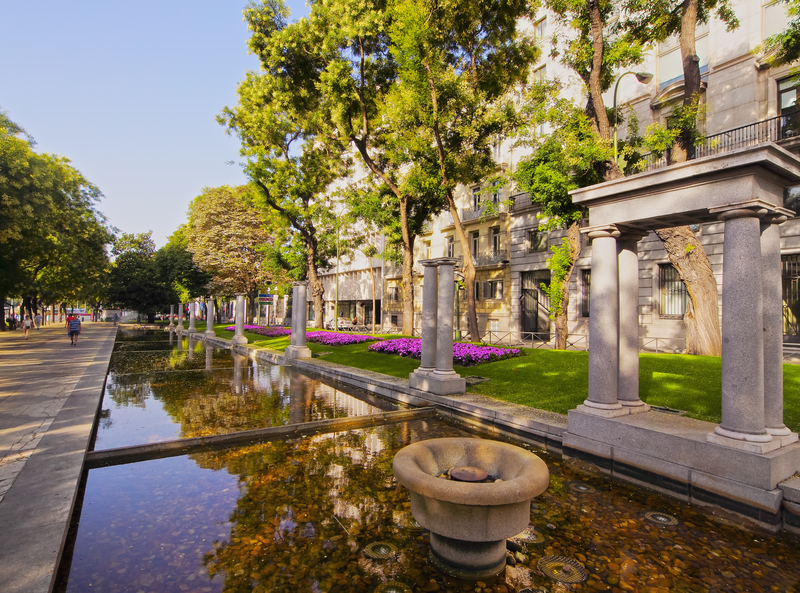 Behind the Prado, you’ll find El Retiro Park, the former royal gardens and the largest public gardens in Madrid. You can walk or cycle on pathways to the iron-and-glass Crystal Palace pavilion (c. 1887), row in the lake or explore botanical gardens here.

As for the three major museums, Reina Sofia is home to “Guernica,” Picasso’s powerful anti-war painting created for the Spanish pavilion of the World’s Fair in Paris, 1937, just after Franco bombed the sleepy Basque village. The museum’s new entry on Ronda de Atocha leads inside to street-level elevators that ascend to a fabulous outdoor terrace with great views. The massive Prado Museum houses extraordinary works by Goya, El Greco and Velazquez, plus Titian, Rubens and Van Dyck. I recommend doing the kid’s tour with the children’s audio guide, checking out only the masterworks on the first floor, or waiting if you think they may be overwhelmed. Thyssen-Bornemisza is a small, private museum with art by Chagall, Klee, Renoir and Van Gogh, American art from the Hudson River School to Pop Art and selections from Italian, German and Dutch masters.

This February, I finally visited the multistoried Mercado San Anton in Chueca where there’s an international food court with Greek, Asian, Spanish specialties and even hamburgers. The rooftop restaurant will sometimes cook meat or fish that you buy. I’ve never been, but for families fond of amusement parks, a zoo or aquarium, get to Casa de Campo, the biggest park in Madrid.

Roam from Home: A Celebration of National Parks with Xanterra

Roam from Home: A Celebration of National Parks with Xanterra

United Airlines is making its MileagePlus program more flexible for its frequent-flyer customers in response to the ongoing COVID-19 crisis and global travel restrictions.

Much like cities around the world, San Francisco closed its museums and performing arts venues temporarily due to the COVID-19 pandemic. Thanks to technology, those sheltering in place can experience many of these cultural institutions from the comfort of their own homes. Here are the places opening their doors remotely.