Santa Barbara is perfect for couples. It’s no wonder the city nicknamed the American Riviera is a place to walk hand-in-hand through the urban wine trail, gaze lovingly into each other’s eyes over dinner at an award-winning restaurant or listen to the crash of waves and call of seagulls along the country’s oldest operating wharf. Yet, it’s also a great place to bring kids.

Over a school holiday, we went to Santa Barbara with our two boys, ages 9 and 11. We stayed at the Hotel Santa Barbara — perfect for those seeking a graceful setting. Traveling with kids demands access to various types of efficiency and the Hotel Santa Barbara offers it with its location. Smack dab in the middle of downtown within walking distance of restaurants, shops and activities, there was no need for us to use our car if we didn’t want to go far and there’s plenty to do right outside the front door.

Inside the hotel, the kids loved the old-fashioned elevator with a manual door, including a sliding gate. Our double queen-sized room was cream colored, like most of the hotel, and felt like an elegant throwback, a theme started in the elevator. Our family wasn’t the only one charmed by the glamour of Hotel Santa Barbara. In its infancy, back when elevator operators did transport guests, Hollywood celebrities such as Clark Gable and Carole Lombard rode them to their rooms. Today, the Hotel Santa Barbara hosts movie stars and filmmakers during the Santa Barbara International Film Festival. 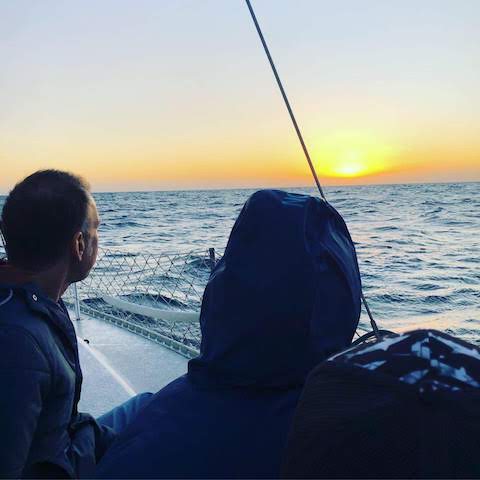 After checking into our room, we grabbed a quick bite next door at Baja Sharkeez. This casual sports bar offered surprisingly fresh and tasty fish tacos. Then, we headed straight for the Santa Barbara Harbor for a sunset sailing cruise with Sunset Kidd. The boat crew, Tommy and Jody, were welcoming and friendly. We were the last passengers to board the sailboat so the seats in the aft (rear of the boat) were already full. We could have sat inside the plastic covered bridge with Captain Jody, but what fun would that have been? Instead, we sat on the bow (the front of the vessel) and held the cables and ropes as the boat rocked with the current. We sipped cocktails (the boys had juice) from the full cash bar while the sun slid slowly into the ocean. The thrill of the oncoming mountains of waves kept our hands gripping the cables. Eventually, the chill did send us inside the bridge and we learned more about Santa Barbara history from Captain Jody. Ocean and seagulls, check. 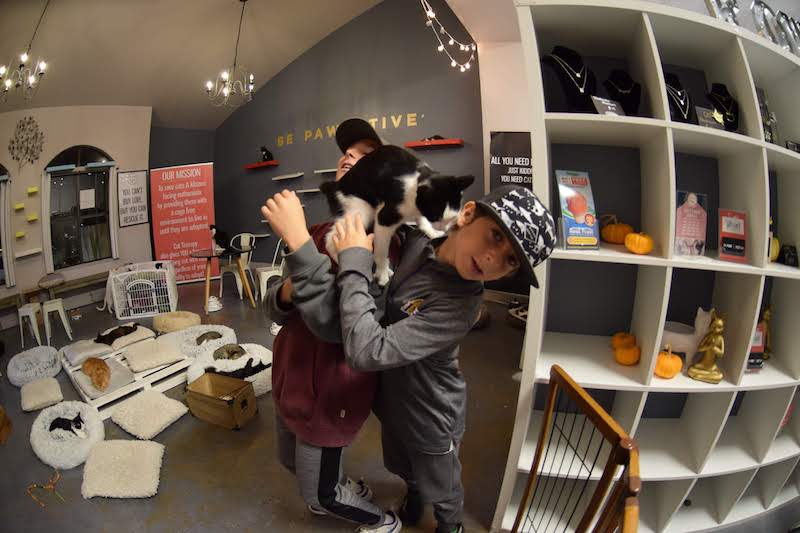 Next, we surprised the boys by taking them to a place where they could play with dozens of cats. Cat Therapy takes felines out of shelters and fosters them until they are adopted. They are all cage free once acclimated to the group. Visitors can play with them for $12 an hour during the week and $14 on a weekend. You should make reservations online because they limit the number of visitors to 14 so it doesn’t become overwhelming to anyone, especially the kitties. So far, they’ve saved 410 cats according to the website.

Dinner that night was in a California Michelin Guide-recommended restaurant, The Lark, which was busy, crowded and fun. The service was casual but super attentive. The food was creatively crafted and delicious and came with fancy restaurant prices. The Lark won the 2019 Official Drink of Santa Barbara cocktail contest with mixologist Nick Priedite’s creation, Sticky Fingers, like a walk through wildflowers tinged with the spice of mezcal. Award-winning restaurant, check. 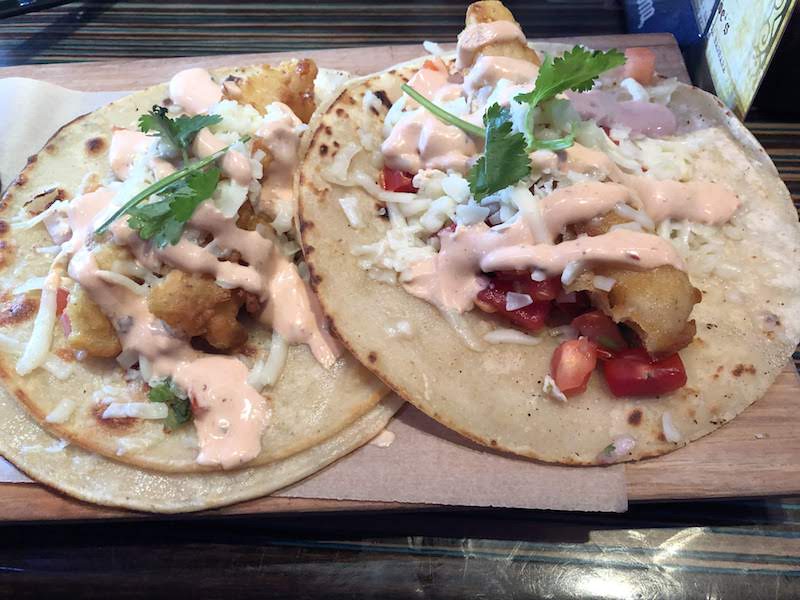 The boys noticed a skatepark when we drove into town and asked if they could visit the next day. Skater’s Point Skatepark is more than 14,000 square feet of fenced-in concrete ramps, rails and quarter-pipes next to West Beach. The park is free to the public and helmets are required — we brought helmets and skateboards because this was their new thing. There were many skateboarders and kids on scooter of all ages, but many were in the boy’s range. Everyone took turns going off the ledges and ramps as parents like me covertly took photos. The skatepark faces the ocean alongside the boardwalk. There’s also a huge parking lot for $2 per hour. 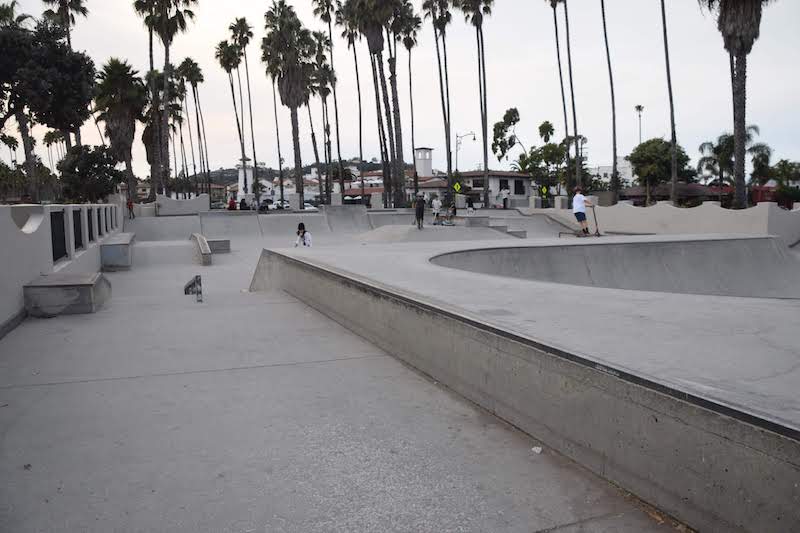 Across the street from the skatepark, Santa Barbara Trolley Company operates 90-minute, hop-on-hop-off tours of the city. It’s a great way to get around town and learn about its history. Our guide Rob regaled us with interesting Santa Barbara history and trivia, like the street names in the city are named after what they point toward, like Olive Street faces in the direction of the olive gardens. Anacapa Street aims at Anacapa Island.

Also it appears most of Hollywood’s A-listers have homes here. There is a rest stop (about 20 minutes) at Old Mission Santa Barbara, where we got off and walked around the enormous grounds and the boys jumped off some walls. We discussed missions with our fourth grader, who had just written an essay on the topic, as the local mission is still in operation with regular church services and friars who live on the premises. We whisked off around the zoo and through neighborhoods to learn more about Santa Barbara. Typically not ones for tours, the funny tour guide, open-air bus and the fact there was no walking involved won the boys over and they came back knowing a bit more about the city we visited. Tickets are $25 for adults and kids under 12 are free with a paying adult, otherwise they’re $8. Plus your ticket is good for the entire next day and gains discounts around the city. 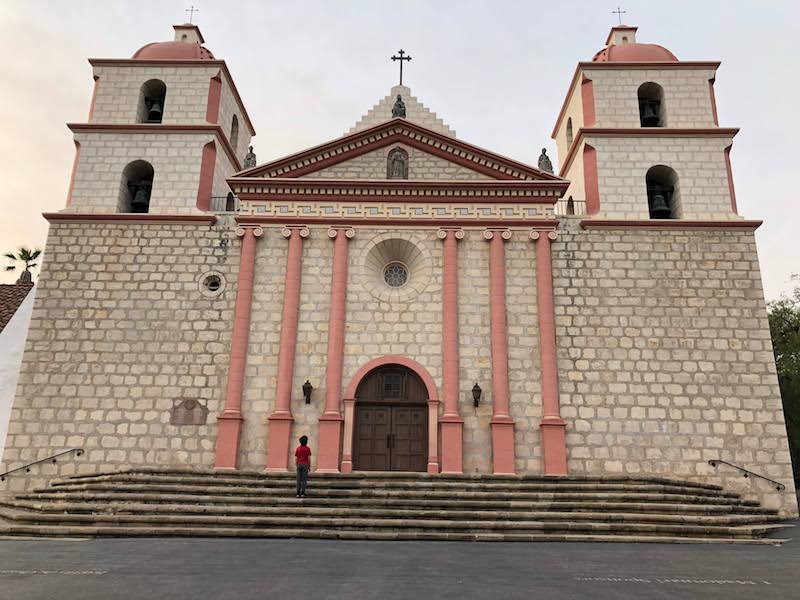 The next day, we went to Arroyo Burro Beach, nicknamed Hendry’s by locals after the family who owned it for many years before the city bought the beach. Arroyo Burro Beach is open to dogs and is super family-friendly. Dogs and kids run everywhere and my boys found comrades throwing a football among the waves. The whole area exudes a laid-back vibe and, indeed, one local approached us and easily struck up a conversation as we watched the boys play football with the locals they befriended. Adjacent to the beach is the Boathouse. With windows open to the panorama of the ocean, there is no bad seat at this spectacular restaurant. I loved the Boathouse omelet, lobster, shrimp and spinach in Gruyere cheese and beyond delicious. My husband got the dish he gets every time we come, the signature breakfast, snow and rock crab cakes under poached eggs topped with chipotle hollandaise. These chefs are seriously talented. Don’t miss the signature bloody Mary with two thick slabs of bacon on top. Parking is plentiful in the attached lot but, when we arrived, there was a line to get in and it took a while to find a vacant spot. The lot is open sunrise to sunset.

When the weather forecasters promised rain, we went into MOXI – The Wolf Museum of Innovation and Exploration. MOXI is three floors of kids learning about science and technology through hands-on, interactive exhibits. Guides, called Sparks, walk around to answer any questions. We didn’t stay that long because it also seemed geared toward younger kids, maybe the 8 and under set — we ended up back at the skatepark.

Our last day, we rented a double surrey from Wheel Fun Rentals and pedaled our way across the coast. The boys pretended they were driving, until we actually let them drive and we didn’t tip over. It was a gorgeous day and we ended it back at the skatepark.

We made a stop to buy some bottles at one of our favorite wineries, Jamie Slone Winery, where they do a chocolate and wine pairing. The boys got a flight of rich chocolate and we got to pick a new favorite wine. So, finally, the Urban Wine Trail, check, too. It turns out Santa Barbara is perfect for families. 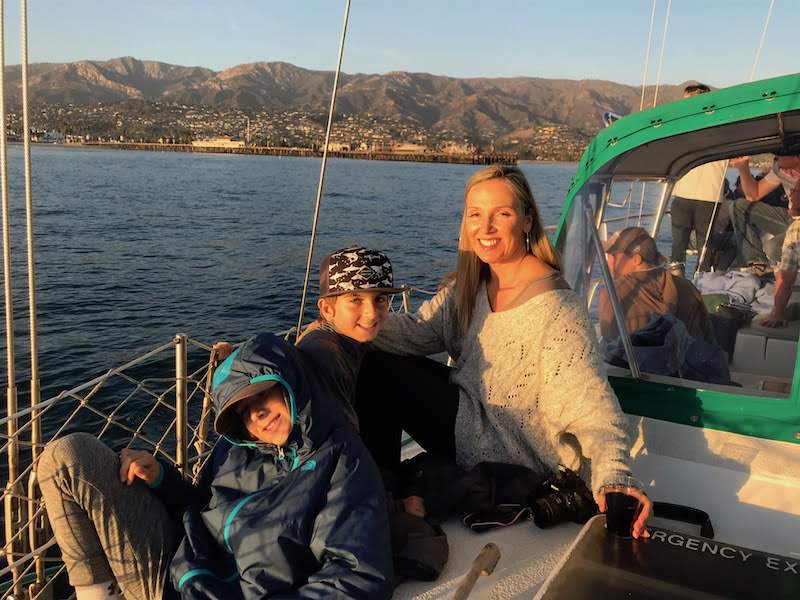